Closely related to the spider and around since long before the dinosaurs, the horseshoe crab has light blue blood that's vital for medical research. But can these living fossils survive the age of man? 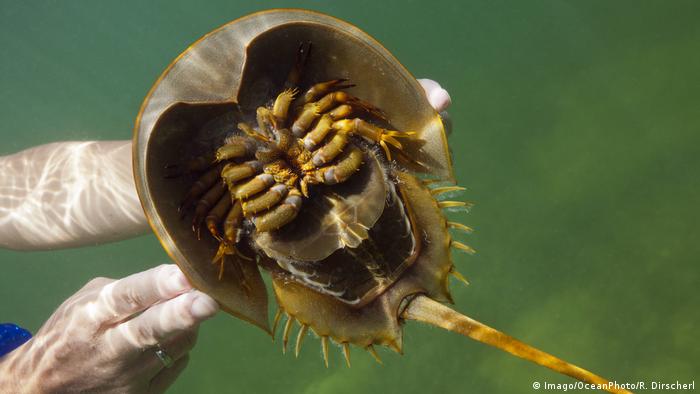 In the waters along the eastern seaboards of the United States and several East Asian countries, lives a species so dogged in its determination to defy decimation, it's earned the tag of "living fossil."

"They crawled underneath the legs of dinosaurs and the dinosaurs were on earth for 150 million years," said John Tanacredi, a professor at Molloy College in New York and an eminent authority on horseshoe crabs, which could be the most amazing species many people have never heard of.

"Of course, the mass extinction event 65 million years ago that saw the demise of the dinosaurs — both terrestrial and in the marine environment — makes it even more unique that these animals have survived."

More on dinosaurs: Dinosaurs are extinct because an asteroid hit the wrong spot

Technically, they're not crabs, nor are they shaped like a horseshoe, exactly. Like crabs though, they're arthropods, but the four different species of the animal belong to the subphylum chelicerata, and so are closely related to arachnids such as spiders.

The animals have an almost alien quality to their appearance. They grow to about 60 centimeters (23 inches) in length have hard, helmet-like outer shells, five pairs of legs with a mouth located at their center, and several pairs of eyes distributed across their bodies. 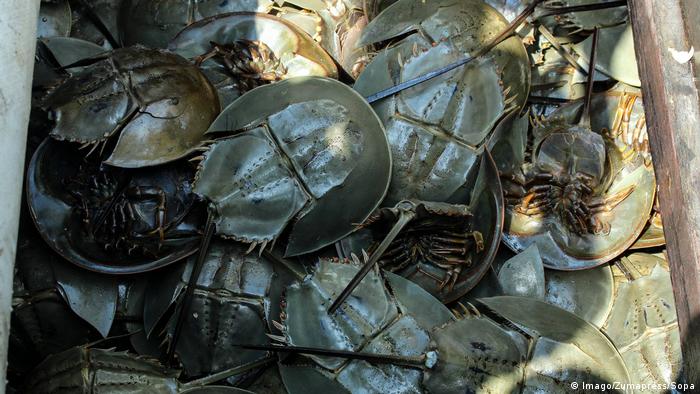 Humans arn't squeamish about using the 'crabs': Whether or not they survive bleeding seems of little importance

Work relating to the study of the species' 10 eyes won the Nobel Prize for medicine in 1967. Indeed, perhaps the most surprising things about these unsung creatures is that they may well have saved your life.

As far back as 1956, studies revealed that the crabs' ethereal, copper-based light blue blood is rich in amebocytes — cells that produce an almost instantaneous reaction to toxins. This means their blood can be used in the limulus amebocyte lysate (LAL) test which is now used in trials for a vast array of pharmaceuticals.

This discovery has led to the emergence of a huge industry that sees more than half a million crabs captured annually along the Atlantic coast.

Read further: What is the future of animal testing?

Collectors gather up the bottom-dwelling animals when they crawl ashore to breed, then take them to laboratories where they're pierced around the heart to enable the extraction of about a third of their blood. They're then released back into the wild.

Because every drug now certified by the US Food and Drug Administration (FDA) has to be tested using LAL, the crab's blood is in demand. In theory, this should imply a readiness to ensure the species' survival. Not just in the US, but in Asia too. But things are not that simple. 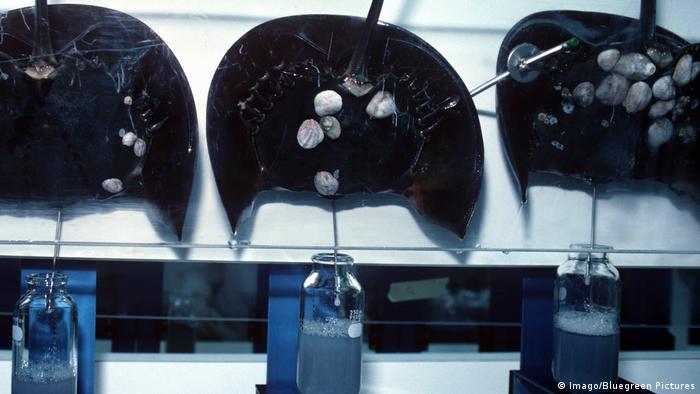 An abundance of threats

Apart from the fact it's still largely unknown how much direct or indirect damage is caused to the animals through the bleeding process, or what happens to them once they're returned to water, they are also used as bait by whelk and eel fishermen, their estuarine habitats are eroding and they're increasingly regarded as a delicacy in Asia.

"In China, these animals are brought in predominantly for human consumption," said Glenn Gauvry, who set up environmental advocacy Ecological Research and Development Group (ERDG) in 1995.

Before they are eaten, however, they're rented out to the pharmaceutical industry for the extraction of tachypleus amebocyte lysate (TAL), which is the same as LAL except that it is taken from a different horseshoe crab species. But rather than being returned to the sea, they're butchered for the food market.

"You combine that with loss of habitat — both marine and terrestrial — and we're looking at really serious problems for those three species in Asia," Gauvry added.

All of this prompted the International Union for the Conservation for Nature (IUCN) to list the animals as vulnerable in 2016. In short, having survived so much and having come this far, the horseshoe crab faces an uncompromising challenge in the form of man. 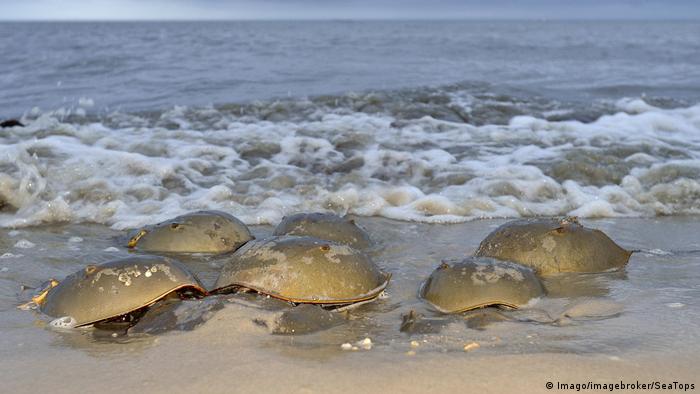 In Asia, after the animals are caught and their blood has been extracted, they end up on the dinner plate instead of back in the wild

The decline of the species doesn't only affect the crabs themselves, but migratory birds such as the red knot, which feeds on the arthropods' eggs during their breeding season. This occurs over several weeks in the early summer and sees millions of animals crawl ashore. Their numbers are most dramatic when high tide coincides with a full moon.

Birds, and indeed people, flock to this natural phenomenon. Gauvry has witnessed the event several times from his town Little Creek on Delaware Bay, which is regarded as the "epicenter" of the species' breeding.

Through his work with ERDG to help wildlife in the aftermath of oil spills, he realized the horseshoe crab, which didn't have many fans, wasn't really on the conservation radar.

Back in the day: Scientists find elephant-sized creature that lived with dinosaurs

By providing information on its peer-reviewed website, the group has helped change public perceptions and to provoke curiosity about this unusual creature of the deep.

"Back then, coastal communities despised horseshoe crabs," Gauvry told DW. "They came up to spawn on the beach in large numbers and they died in large numbers. They smelled, they attracted bugs."

He said it wasn't uncommon for communities to hire a contractor, "dig a big pit and throw all the horseshoe crabs in alive or dead. There were no regulations." 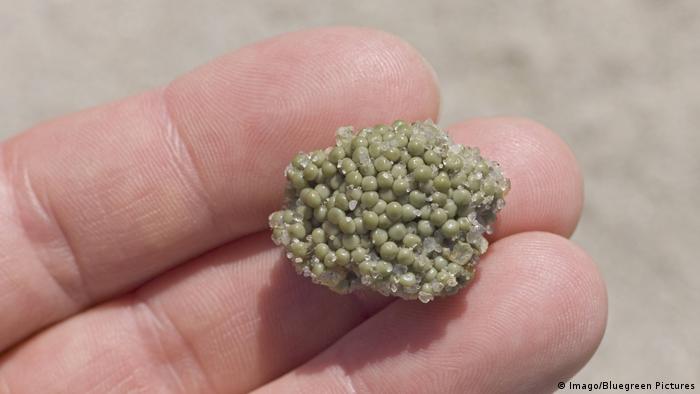 Technology to the rescue

That has now changed. In no small part, due to awareness-raising by groups such as ERDG, which encourages anyone who finds one of the animals — which are not harmful to humans — on its back, to simply turn it over.

They have also protected some of the breeding sites in Delaware Bay by constructing fences to ensure less mortality during the spawning season.

But pressures on the species persist. Efforts to develop synthetic replacements for the TAL test in Asia have hit regulatory hurdles, and whelk and eel fisheries claim there is no suitable alternative to the crab as bait.

Husband-and-wife team Anthony and Kristen Dellinger dispute that. They work for the nanotechnology company Kepley Biosystems in South Carolina, where hundreds of thousands of horseshoe crabs are harvested annually for bleeding.

They're working on adapting an existing synthetic bait to make it suitable for whelk and eel fishing, and are developing a crab egg that appeals to the tastes of migrating shorebirds. They also see scope for rearing horseshoe crabs to ensure the potential lethal and sub-lethal effects of the harvesting process are minimized.

By husbanding them in controlled environment, Anthony Dellinger says they "would have the ability to have good patient records and ensure good health for them over a long period of time." And that, he adds, could also be advantageous to the industry.

"It would allow them to harvest horseshoe crabs more often, whereas now they harvest when they spawn which is typically once a year and they have to collect a large amount of crabs and bleed them for a substantial amount of their blood volume."

Whatever the future holds, the horseshoe crab is perhaps more adept than most species at seeing it through.

"Everything it does has a purpose and that purpose is survival," Glenn Gauvry said. "They're quite adaptable to an awful lot of things. But we [man] move too fast, so, yeah, we end up being the big challenge."

An international team of scientists has discovered an unknown type of insect. They say it's a "living fossil". The scientists call it "Gladiator" because it looks like the fighters in the movie of the same name. (19.04.2002)