The German government will have to spend 50 billion euros on refugees during this year and next, a new study estimates. In order to balance these costs, researchers urge financial restraint elsewhere. 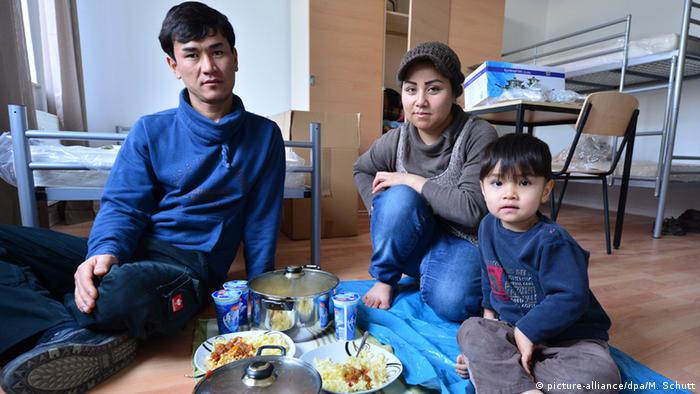 Tax money to the tune of 50 billion euros is needed to shelter, feed and train the refugees in Germany in 2016 and 2017, says a new study by the Cologne Institute for Economic Reseach (IW). The study was financed by companies and business associations.

Housing, food and welfare would cost 12,000 euros per refugee per year, the researchers assume. They add 3,300 euros annually per refugee for language and integration classes, resulting in a total of 15,000 euros per person and year.

"Of course, every euro spent by the government is somebody else's income, from construction companies building refugee shelters to language schools and shops where refugees buy food," IW's Tobias Hentze, who co-authored the study, told DW.

"That's why we consider spending for refugees to be a small stimulus package for the economy."

But in this study, Hentze focuses only on the money the government has to spend, in other words, the burden on state coffers. He and his co-author relied on available estimates for the number of refugees. After the 1.1 million who came last year, 800,000 are expected to arrive this year, and an additional 500,000 next year.

Based on these numbers, a "cumulative yearly average" is then calculated. "If two refugees arrive on July 1, they are counted as if one person stayed the whole year," explained Hentze. The study puts this yearly average at 1.525 million people in 2016, and 2.163 million in 2017.

The rest of the maths is fairly simple: the average number of refugees is multiplied by the costs per head.

Some of the refugees will find jobs after the bureaucratic hurdles are cleared and work permits are issued. The researchers estimate that 99,000 people this year and 276,000 in 2017 won't have to rely on the government's support, except for language and integration classes. The money not spent on them is taken into account in the study.

However, even this deduction does not provide the full picture, Hentze admitted. "If refugees have jobs, they pay taxes and social security contributions. This money would be washed into state coffers."

He added that IW had not yet tried to calculate exactly how much that would be, but said an analysis of fiscal costs and benefits was in the works.

All studies on the cost of refugee support suffer from a lack of data. It is simply not clear yet how many refugees will be able to find work.

"Our expectations should not be too high," warned Detlef Scheele, a director at the Federal Labor Office (BA), in an interview for the "Süddeutsche Zeitung" newspaper. "If all goes well, maybe 10 percent of refugees will find work during their first year here, half of them after five years, and 70 percent after 15 years."

"The best way to integrate refugees into society is to have them join the workforce," says Tobias Hentze from the IW research institute. "The government should act quicker to facilitate this process. This will also reduce costs."

Almost 50 billion euros will be needed until 2017, the IW study concludes - 22.1 billion this year and 27.6 billion in 2017. This is roughly in line with the findings of a recent study by the Kiel Institute for the World Economy (IfW), where the price tag for the two-year period ranges between 52 and 63 billion euros, depending on the number of refugees to come.

The numbers might seem high, but that's not the point of these studies, IW's Hentze said. In January, German Finance Minister Wolfgang Schäuble announced a surplus in tax revenues of 12 billion euros. The good news prompted several federal ministers to demand more money for their portfolios.

"I question that these demands are justified," says Hentze. "The government should focus on what is essential, and without doubt the support for refugees is."

More and more EU countries are reintroducing long-abandoned internal border controls to try and stem the influx of refugees. What will be the consequences? Predictions differ. (25.01.2016)