Merkel expects most Syrian and Iraqi refugees to return home once conflict is over | News | DW | 31.01.2016

Chancellor Angela Merkel has said she expects most Syrian and Iraqi refugees to return home once the conflict in their home countries has ended. She urged other European countries to offer more help. 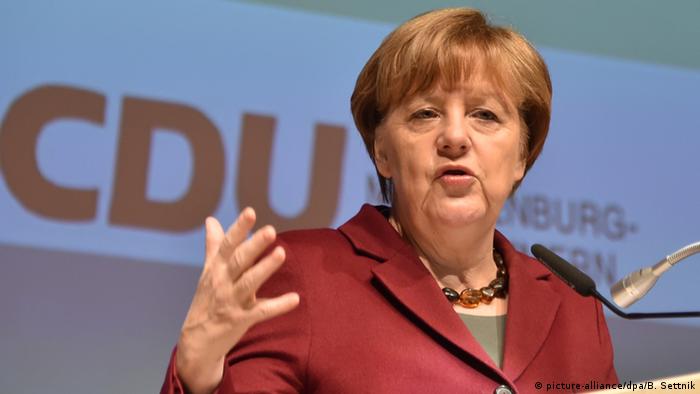 Speaking at a regional party meeting, Chancellor Angela Merkel sought to moderate the criticism which has grown over her open-door policy towards refugees from conflict areas in Syria and Iraq.

"We need ... to say to people that this is a temporary residential status and we expect that, once there is peace in Syria again, once IS has been defeated in Iraq, that you go back to your home country with the knowledge that you have gained," she told members of her Christian Democratic Union (CDU) in the state of Mecklenburg-Western Pomerania on Saturday.

The Chancellor used the example of the refugees from the former Yugoslavia in the 1990s who came to Germany. She said that 70 percent of them had returned home.

Germany has taken in more than 1.1 million asylum seekers over the last year. Many have made hazardous journeys. On Saturday, Turkish coastguards recovered the bodies of women and children washed up on a beach after yet another migrant boat sank while trying to reach Europe. At least 37 people died.

The leader of Merkel's coalition partners, the Christian Social Union (CSU), Horst Seehofer, has threatened to take the government to court if the flow of asylum seekers is not reduced.

Merkel also said that all EU states would suffer if the passport-free Schengen zone collapsed and national borders were closed. She said that all states should have an interest in protecting the bloc's external borders.

The head of the right-wing, isolationist Alternative for Germany (AfD), Frauke Petry, said agreements should be made with Austria and the EU's external borders be reinforced. Controversially, Petry called for "border protection installations" and that border guards should have the right to shoot illegal migrants "if necessary."

Merkel urged other European countries to offer more help by taking in refugees: "because the numbers need to be reduced even further and must not start to rise again, especially in spring."

Head of the European Union's border agency Frontex, Fabrice Leggeri said that the UN estimated up to a million migrants may try to enter Europe across the eastern Mediterranean and Western Balkans over the next year. Leggeri suggested the figure was realistic. He told the magazine, Der Spiegel, "It would be a big achievement if we could keep the number ... stable."

Germany and Italy have announced plans to fight human traffickers as Europe continues to struggle with a severe influx of refugees. Both countries also spoke in favor of a united European response to the refugee crisis. (29.01.2016)