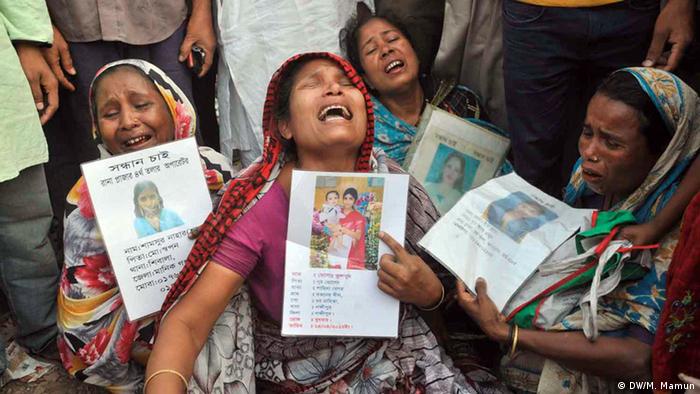 What's common between the 2012 factory fire in Pakistan's Karachi city and the 2013 Rana Plaza collapse near the Bangladeshi capital Dhaka? Both facilities manufactured clothes for popular European brands and both had abysmal safety standards for their workers.

The textile factory fire in Karachi burned to death some 250 workers, whereas the Rana Plaza collapse killed more than 1,100 people. Hundreds more were severely wounded in both accidents.

Much has been said and written about the two cases over the years. Litigation processes, public awareness campaigns and safety inspections kick-started in the aftermath of the two fatal incidents. Some compensation has also been paid to the victims' families. But many questions remain unanswered to date. Most significantly, what lessons have European textile companies and consumers learnt from these tragedies? And how to make sure that these incidents don't happen in the future?

The latest setback to the efforts to ensure safety for textile workers in South Asia is the decision of a Bangladeshi court to evict European safety inspectors.

The group of inspectors comprises more than 200 firms — including global clothing giants such as H&M and Zara-owner Inditex — which are signatories to the Accord on Fire and Building Safety in Bangladesh, sealed after the Rana Plaza factory collapse in 2013.

Although the five-year agreement was set to expire in May 2018, the brands agreed to extend it until 2021. But the Bangladeshi government established a national regulatory body to take over the European inspectors' work.

Bangladeshi Commerce Minister Tofail Ahmed told Reuters last week the accord was no longer needed as the government's national regulatory body, the Remediation Coordination Cell, was able to do the same job.

In May, a Bangladeshi court ordered the European safety inspectors to halt their operations in the South Asian country following a petition filed by a local readymade garment supplier against the agreement.

European inspectors complain that Bangladeshi authorities did not cooperate in the task to fix the safety loopholes in garment factories. At the same time, the European inspectors' inability to inspect factories could result in the severing of ties with Bangladeshi suppliers. This could have a negative impact on Bangladesh's economy, which relies heavily on garment exports and textile manufacturing for Western brands. 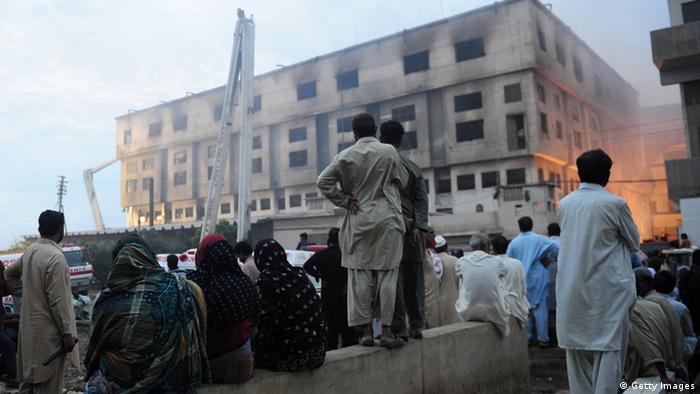 Over 260 people died on September 11, 2012, when a textile factory in Karachi caught fire

Germany, after the US, is the second-largest export destination for Bangladeshi apparel, with the South Asian country exporting garments worth $4.65 billion (€3.8 billion) to the EU nation in the fiscal year 2015-16.

Many of the survivors of the Rana Plaza collapse were involved in producing garments for German brands.

"We have submitted an appeal to the Supreme Court... and are working to have a stay issued against the High Court judgement that would close down our office," Rob Wayss, the Accord's executive director told Reuters news agency.

Ben Vanpeperstraete, the lobby and advocacy coordinator for Clean Clothes Campaign, a global alliance dedicated to improving working conditions and empowering workers in the global garment and sportswear industries, told DW the "progress reached on fire safety by the Bangladesh Accord is under severe threat now."

"The Accord's Bangladesh office might be closed after November 30. This will impair the group's ability to inspect and monitor factories in Bangladesh and violates previous agreements that Accord would remain fully operational until domestic institutions have the technical capacity and the political will to perform inspections and ensure remediation," Vanpeperstraete said, adding that the risk of new factory tragedies looms large.

"It would be a reputational and legal risk for brands, but mostly for workers that pay the largest price of all: their lives."

"A tragedy like the Rana Plaza collapse could happen again any day. In this situation it would seem reckless to curtail the one credible and successful safety program currently active in Bangladesh: the Accord," Vanpeperstraete underlined.

Bernhard Hertlein, a Bangladesh expert at the German newspaper Westfalen-Blatt, stressed that German companies had contributed reasonably to the €30 million fund created to support the victims.

In the case of the Karachi Baldia Town factory fire, the German budget clothing store KiK (Kunde ist König, which in English translates into "Customer is King") already paid €5.3 million to those affected.

But is it enough to compensate the injured and the victims' families? The question remains pertinent six years after the Karachi factory inferno and five years since the Bangladesh tragedy.

A survey by ActionAid Bangladesh, an international non-profit group, revealed earlier this year that nearly 48 percent of the survivors of the Rana Plaza incident are out of employment due to their physical and mental weaknesses. The report stressed that apart from mental trauma, many survivors suffer from headaches as well as hand, leg and back aches, which have rendered them unable to return to work in Bangladesh's multibillion dollar garment industry.

Mahmudul Hasan Hridoy was stuck under the Rana Plaza debris for 20 hours, resulting in the loss of his right leg.

Having lost everything because of this disaster, he decided to fight for victims like himself and formed an organization called the "Rana Plaza Survivors Association." Mahmudul told DW in April that the victims of the accident have yet to receive any compensation.

"We have received donations from various sources, but no compensation as yet. Each victim of the disaster should receive €48,000 as compensation," he demanded.

Mahmudul believes that the Bangladeshi authorities have received vast sums of money meant for the survivors, none of which has reached the victims. 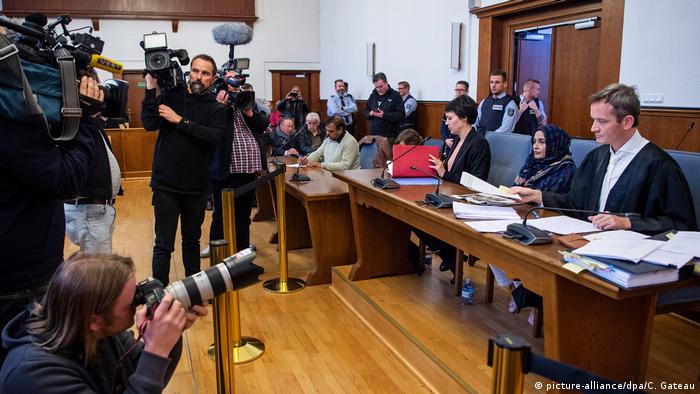 In 2015, a group of people affected by the Karachi factory blaze filed a case against KiK at a German regional court in Dortmund. They are seeking compensation and an apology from KiK.

A court in the German city of Dortmund begins a trial in the case on Thursday, and KiK will likely be forced to answer some tough questions. Should KiK be responsible for working conditions in its supplier company? The court is set to decide.

Four plaintiffs — one survivor and three dependents — are each demanding €30,000 in compensation from KiK and accuse the company of being jointly responsible for inadequate fire protection measures at the Ali Enterprises garment factory. KiK rejects the claims.

In September 2016, KiK agreed to pay a total of $5.15 million (€4.7 million) to the affected families and survivors following a negotiation overseen by the International Labour Organization. KiK claims to have voluntarily paid out $1 million in 2012 in emergency aid.

But the company has refused to make compensation payments for injuries incurred, because it said it could not be held responsible for the fire. Legal adviser Joachim Jütte-Overmeyer said the fire was an act of arson caused by extortionists belonging to a powerful political party in Karachi.

But Remo Klinger, the litigants' attorney in Dortmund, said the case was never about who caused the fire. "We are concerned about the lack of safety arrangements (inside the factory)," he said.

Klinger also points out that the buyer is "legally bound to ensure the workers at the production unit have access to health and workplace safety." KiK, in his opinion, did not follow the procedure.

In September, Saage-Maass, a human rights activist and lawyer working with the European Center for Constitutional and Human Rights in Berlin, told Pakistan's The News daily that "the high death toll of the factory demonstrates that the certification process ignored major safety issues."

She also referred to a digital simulation of the fire by Forensic Architecture, a research group based in London, which showed that "if safety was in place, hundreds of lives could have been saved at the factory." 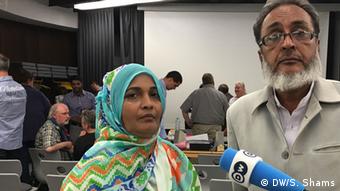 Irrespective of the outcome of the KiK trial in Dortmund, it is clear that pressure on European companies to ensure safety and better conditions for workers in South Asian factories has increased in the past few years.

At the same time, the Bangladeshi court's decision to evict European inspectors shows how local capitalists can pressure their governments into ignoring workers' safety in order to maximize their profits. Rights groups say it is crucial that European governments pile pressure on South Asian leaders to force them to implement proper policies to safeguard workers' rights.

In a 2016 interview with DW, Abdul Aziz Khan, a plaintiff in the KiK trial, appealed to the German public to support their cause and put pressure on companies and governments.

"We are thankful to the German people for their support. It is because of them that we are here. But we expect them to demand from their companies that they ensure workplace safety in the factories that manufacture products for them," said Khan, who lost his son in the Karachi factory fire.

Saeeda Khatoon, another person affected by Karachi blaze, said the Dortmund trial could set a precedent. "260 people died in that factory, trying to escape the hellish blaze but couldn't. This shouldn't happen anywhere. No mother should suffer the way I have."

KiK and Pakistan's industrial 9/11 — a timeline

Can Germany's clothing retailer KiK be held accountable for a fire that broke out in a Karachi firm in Pakistan in 2012? Here's a timeline of the case that judges in Germany are dealing with right now. (29.11.2018)

German textile company KiK has released $5.15 million in compensation for a 2012 factory fire in Karachi that killed 260 people. KiK and the victims' families still disagree over responsibility of the catastrophe. (09.02.2017)