Five years after the biggest industrial disaster in Bangladesh’s history, no relief seems to be in sight for the thousands of survivors who are suffering from severe physical and psychological trauma. 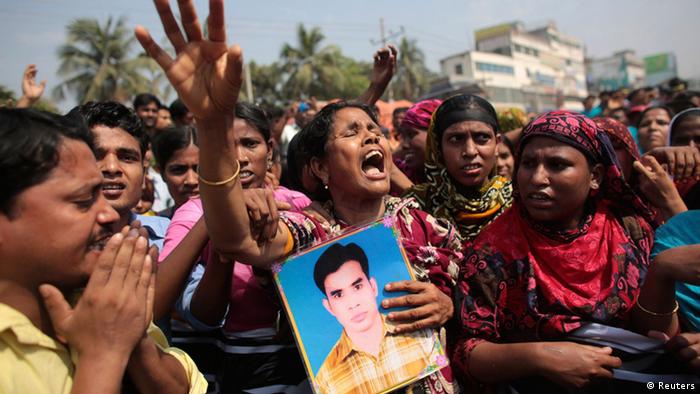 "I can't even think of going near a multi-story building. I become scared and feel nervous. It reminds me of the horror I faced when the Rana Plaza building collapsed," says Lufta Akter, a 36-year-old sewing machine operator, who was on the building's 5th floor when disaster struck on April 24, 2013.

Today, Bangladesh marks the fifth anniversary of the deadliest disaster in the garment industry, which killed more than 1,130 and injured around 2,500 workers, when the building collapsed in the outskirts of the capital, Dhaka.

The building had housed five garment factories that manufactured clothes for many international clothing brands in Europe and North America. Investigations would later reveal that besides shoddy construction, the building had too many floors and too much heavy equipment for the structure to withstand.

Lufta Akter still vividly recalls how she was rescued a few hours after the collapse. She has since undergone extensive psychological counseling but hasn't fully recovered and remains unemployed till now.

Lufta Akter is one of the many who have been left traumatized by the disaster. A recent survey by ActionAid Bangladesh, an international non-profit federation, reveals that nearly 48 percent of the survivors of the Rana Plaza incident are out of employment due to their physical and mental weaknesses. The report stressed that apart from mental trauma, many survivors suffer from headaches as well as hand, leg and back aches, which left them unable to return to work in Bangladesh's multibillion dollar garment industry.

Farah Kabir, the country director of ActionAid Bangladesh, says that a medium to long-term plan is required to rehabilitate the survivors, both in terms of health and economic well-being. "While survivors have been provided with different types of training, there is no follow-up on how they have applied the training or if they have been able to apply them at all," she told DW, adding that trade bodies can play a strong role in the economic rehabilitation of survivors.

Experts contend that the international clothing brands that produce their apparel in Bangladesh have a significant role to play in rehabilitating the Rana Plaza survivors. Bernhard Hertlein, a Bangladesh expert at the German newspaper Westfalen-Blatt, is of the view that a "protected factory" can be created for some of the victims, where they can work without the pressure of rapid "piece work," which is a type of employment in which a worker is paid a fixed rate for each unit produced.

"When the survivors feel better after working for some time at the protected factory, they can switch to normal factories where they will get a higher payment," he told DW.

Germany, after the US, is the second largest export destination for Bangladeshi apparel, with the South Asian country exporting garments worth $4.65 billion (€3.8 billion) to the EU nation in the fiscal year 2015-16.

Many of the survivors of the Rana Plaza collapse were involved in producing garments for German brands. Hertlein stressed that the German companies had contributed reasonably to the €30 million fund created to support the victims.

But Lufta Akter received only a donation of a few hundred euros after the incident. She has yet to receive any compensation for the accident that has ground her life to a halt. "Since the accident I can't remember faces anymore, I forget things easily. I am paralyzed by fear and memory loss," she said.  Her only hope is to get compensation, which could help her livelihood in the future.

Mahbuba Akter was on the 7th floor of the Rana Plaza when it collapsed, sustaining injuries to her neck, back and left knee when she fell as the roof caved above her. Nevertheless, the 30-year-old single mother has had to fend for her family and now works at a single-story garment factory as she fears working in high-rise buildings.

"Whenever I hear a loud sound around me, I panic. I don't know what to do. I feel like I'm dying and there's nobody to help me out," she told DW.

Mahbuba now earns far less than what she did at Rana Plaza, as she has turned down job offers from bigger factories because of her psychological trauma. She hopes to open a tailoring shop one day. However, the few hundred euro donations she received after the tragic incident are not enough to fulfill her dream.

"I have heard that a discussion is going on to compensate us for the damage caused by the collapse. But we haven't received anything even five years after the incident. Had I received a good amount of money as compensation, I would have built my own shop," she said.

No relief in sight

Mahmudul Hasan Hridoy was stuck under the debris for 20 hours, resulting in the loss of his right leg. He drank urine and blood from the dead bodies around him to stay alive. His wife aborted their unborn baby and left him after the incident.

Having lost everything because of this disaster, he decided to fight for victims like himself and formed an organization called the "Rana Plaza Survivors Association." Mahmudul told DW that the victims of the accident have yet to receive any compensation.

"We have received donations from various sources, but no compensation as yet. Each victim of the disaster should receive €48,000 as compensation," he demanded.

Mahmudul believes that the Bangladeshi authorities have received vast sums of money meant for the survivors, none of which has reached the victims.

While the victims believe that compensation might help in their rehabilitation, Bangladesh has no standard form of compensation for the death or injury of garment workers.

"A high-level committee that was formed on the order of the High Court in 2013 had submitted a standard for compensation, but the High Court's verdict on the proceedings is pending till now. Thus even after five years, there is yet to be any standard in paying compensation to garment workers," Farah Kabir told DW.

Yet, despite the Rana Plaza collapse, Bangladesh's garment industry has been growing at a reasonable speed. The $24 billion generated in garment exports in 2013 is projected to increase to $30 billion this year. The sector contributes nearly 80 percent to the nation's total export earnings.

A massive fire that ripped through a container depot in Sitakunda in Bangladesh has killed at least 49 people, with the officials fearing the death toll may rise. The cause of the blaze remains unclear.

Bangladesh has ordered the retrial of 38 people charged over the deaths in the collapse of a garment factory in Dhaka in 2013. DW speaks with filmmaker Hannan Majid about what has changed after the Rana Plaza desaster.