While power has been restored across Texas, residents are still facing water shortages. President Joe Biden's declaration will allow his administration to free up federal funding for the snow-hit state. 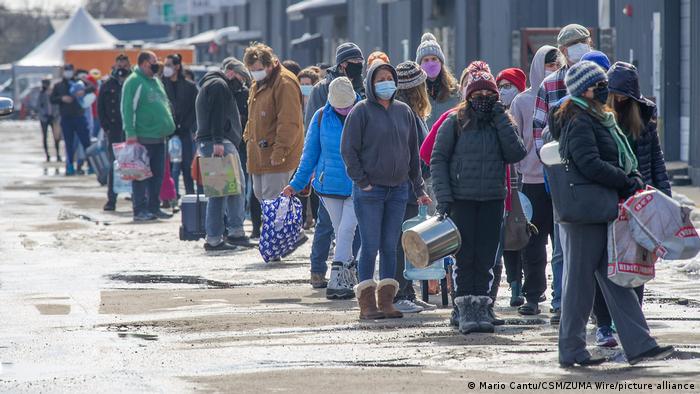 Food and water distribution sites have been set up in several cities, including Austin

US President Joe Biden has declared a major disaster in Texas, where millions of people are still struggling without safe drinking water after a deep freeze left at least 20 people dead in the state.

"Due to lack of power, frozen pipes, high use at certain times, we've seen the number of systems go up that are reporting [water] issues," Toby Baker, executive director of the Texas Commission on Environmental Quality, told reporters on Saturday.

Biden's declaration means that federal funding will be made available, including assistance for temporary housing and home repairs, alongside low-cost loans. Biden has also requested federal agencies to identify additional resources to help deal with the emergency.

Texas is the only state in continental US without an independent power grid. While power was restored across the state on Saturday, authorities have still been distributing fresh water and food to residents. More than 300 "warming centers" have also been set up.

Texas received some relief in the form of warmer temperatures, as the frigid air moved toward the north and east. Strong winter storms also hit Oklahoma and neighboring states over the past week, prompting an unusual deep freeze that has left at least 69 people dead across the country.

DW correspondent Carolina Chimoy, reporting from Houston, said the situation has shifted from a power crisis to a food crisis amid rising temperatures. On Friday, water services for over half of the state's residents were still disrupted.

"This can turn to a very ugly situation for a lot of families, especially for the ones living in the suburbs," she said, adding that food banks are struggling due to the increased demand.

How many people have been affected?

More than 4 million people were left without power after the storms hit. Water problems have affected 14.3 million residents out of a total population of around 29 million.

"Water distribution, bottled water distribution still seems to be our number one priority. As of last night, we had ordered 9.9 million bottles of water through our federal partners... 2.1 million have been distributed so far," said Nim Kidd, chief of the Texas Division of Emergency Management, speaking with Agence France-Presse.

The state had ordered more than 5 million ready-to-eat meals, although their distribution has been hampered due to the weather. Multiple cities are under orders to boil water before consuming it.

The Federal Emergency Management Agency (FEMA) has deployed power generators and supplies to areas affected by the freeze, including water, blankets and fuel.

With power grids now restored, some Texans are worried they may have to face sky-high power bills. Governor Greg Abbott met with lawmakers on Saturday to ensure that people were "not left with unreasonable utility bills they cannot afford because of the temporary massive spike in the energy market."

When will Biden visit Texas?

Only a month into the job, Biden is seeing his disaster management skills tested. He is weighing a visit to Texas to assess the federal response.

The president initially said he hoped to travel to Texas next week, but added that he didn't want his presence to distract from the recovery.

"They're working like the devil to take care of their folks,'' Biden said of Texas officials, adding that he'd make a decision early next week.

Winter storms across wide swaths of the central US have closed roads and left millions of vaccine doses sitting in distribution hubs. Follow DW for the latest.