Plan to release Fukushima water into Pacific provokes furious reaction | Asia | An in-depth look at news from across the continent | DW | 20.10.2020

The Japanese government has reportedly decided to pump highly radioactive cooling water from the Fukushima plant into the Pacific Ocean. The plan has been slammed by environmental groups, locals and neighboring nations. 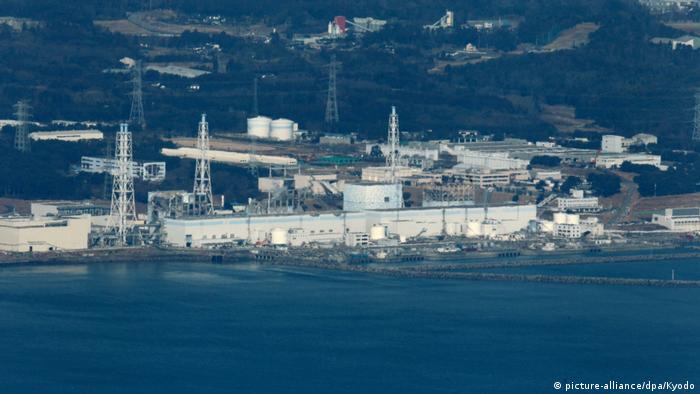 Environmental groups have reacted furiously to reports that the Japanese government is set to approve plans to dump more than 1 million tons of highly radioactive water stored at the Fukushima nuclear plant into the Pacific Ocean, with their concerns shared by the governments of neighboring countries and people living in northeastern Japan.

A government panel set up to determine the best way of disposing the radioactively contaminated water is scheduled to announce its decision by the end of the month.

According to reports leaked to Japanese media, the panel will recommend releasing the approximately 1.23 million tons of water currently stored in tanks in the grounds of the nuclear plant.

The alternatives that have been considered are to evaporate the water into the atmosphere or to mix it into concrete and store it underground.

According to reports from national broadcaster NHK and other news outlets, the panel will call for the water to be again put through a process designed to reduce the radioactivity to below "regulatory standards" and dilute it with sea water before it is pumped into the ocean.

The three damaged reactors require constant cooling with water, which becomes highly radioactive, and mixes with around 170 tons of groundwater that seeps into the subterranean levels of the reactor buildings every day.

That water is pumped into hundreds of huge tanks on the site every day, with Tokyo Electric Power Co. (Tepco), the operator of the power plant, estimating that even with more waste tanks being constructed, storage capacity will be reached fully in the summer of 2022.

Environmental groups insist that there is no reason why more storage tanks cannot be constructed outside the perimeter of the plant. They accuse the government of seeking the cheapest and quickest solution to the problem, as authorities have promised the site will be safe in 40 years.

And that deadline, they say, is completely unrealistic. Complications include recovering the molten fuel that escaped from the reactor chambers. This kind of recovery has never before been attempted and the technology required does not yet exist.

They also accuse the Japanese authorities of playing down the radiation levels in the water planned for release.

"The Japanese government has done a very good job of focusing the attention of the media and the domestic audience on the tritium that is in the water and claiming that it poses no danger to the environment," Shaun Burnie, senior nuclear specialist for Greenpeace, told DW.

And while it is true that tritium is less harmful than other radionuclides, Burnie said, the government's claims are extremely misleading.

By focusing on the tritium, he added, the government has shifted attention away from the other radioactive elements that remain in the water even after it has been "cleansed" by the on-site Advanced Liquid Processing System (ALPS).

It has been claimed the ALPS will reduce radioactive contaminants to "non-detectable" levels.

"The contaminated water contains many radionuclides, which we know impact the environment and human health — including strontium-90," said Burnie.

A study by the Kahoko Shinpo newspaper confirmed that levels of iodine 129 and ruthenium 106 exceeded acceptable levels in 45 out of 84 samples collected in 2017.

Iodine has a half-life of 15.7 million years and can cause cancer of the thyroid, while ruthenium 106 is produced by nuclear fission and high doses can be toxic or carcinogenic when ingested.

Tepco subsequently confirmed that levels of strontium 90 were more than 100 times above legally permitted levels in nearly 65,000 tons of water that had already been treated,

They were 20,000 times above safety levels set by the government in several storage tanks at the Fukushima site.

Precisely what is in the water that is due to be released into the ocean cannot be confirmed, however, as Tepco and the government have refused to permit independent testing on samples.

Residents of Fukushima Prefecture are also against the plan, with 42 of the 59 local authorities in the prefecture passing resolutions either expressing outright opposition to the plan or deep concern.

The fishing industry — which was devastated by the original natural disaster and has since struggled to reestablish itself — is also hostile to the proposals, with representatives of fishing cooperatives meeting with government officials last week to express their concerns.

"We are terrified that if even one fish is found to have exceeded the [radiation] safety standards after the treated water is released, people's trust in us will plummet," a fisherman from the city of Soma told Kyodo News. "Our efforts to fight false information and address other challenges could be wasted."

"Release of the contaminated water into the ocean should not be allowed when fishing unions from Fukushima and neighboring Ibaraki and Iwate prefectures are opposed," he told DW.

"If it is dumped in the ocean, it will become an international problem and it is possible that bans on exports from this area will continue or that new export restrictions may be introduced."

"It is highly unlikely that the highly radioactive waste can be removed from the site of the nuclear plant, so instead of rushing to remove the fuel debris, the overall decommissioning schedule should be reviewed and measures taken so that the contaminated water can be stored on land," he said.

In a statement issued to DW, Tepco said it is "not in a position to make a decision on this matter."

"The government has been listening to the opinions of various stakeholders, including local municipalities and those involved in the agriculture, forestry and fisheries industries, and it is the government that will make a decision on the disposal method," the company said, adding Tepco will follow the disposal guidelines as instructed following the official decision.

The residents of Japan's neighboring countries and their governments are equally concerned, with an editorial in the Korea Times on Monday warning of an "environmental disaster" that could "destroy the marine ecosystem."

The South Korean government has also demanded that Japan provide a full accounting of its plans for the contaminated water, including an accurate accounting of the different radionuclides that it contains.

In a statement released by the Foreign Ministry, Seoul said it places the highest priority on protecting the environment and the Korean public's health.

Scientists and academics in China are demanding independent testing and verification of radiation levels in the water, while environmental and citizens' groups in Taiwan have previously expressed concerns about the impact of any large-scale release of contaminated water on their health and well-being.