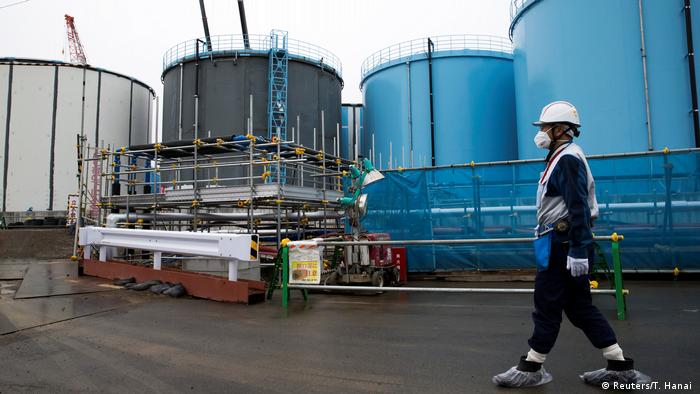 Recently, Japan's environment minister Yoshiaki Harada declared that releasing more than 1 million tons of radioactive water from the 2011 Fukushima nuclear disaster into the Pacific Ocean was the "only option" for Tokyo Electric Power Co (TEPCO), the operator of the plant.

Speaking in Tokyo on Tuesday, Harada told reporters, "The only option will be to drain it into the sea and dilute it. The whole of the government will discuss this, but I would like to offer my simple opinion." 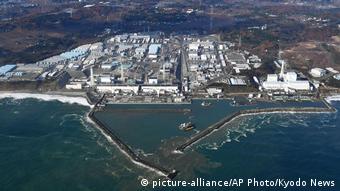 An aerial view of the Fukushima nuclear power plant. Fears abound that the radioactive water may pollute ocean life

Water that is contaminated with radioactive elements has been collecting at the Fukushima plant since it was destroyed by a magnitude-9 earthquake and a series of tsunamis in March 2011. The giant waves swamped the cooling equipment for three of the six reactors at the site, causing the reactors to experience melt-throughs.

Water is being pumped into the reactor shields to control their temperatures, resulting in more than 1 million tons of water being made radioactive. Groundwater is also seeping into the subterranean levels of the plant, adding to the amount of radioactive water that needs to be stored in vast steel tanks on land surrounding the structure.

The Japanese government says storing the water in tanks is not a viable long-term solution to the problem and the technology to completely eradicate all signs of radioactivity from the water is yet to be developed. A new panel has been commissioned to draw up alternative solutions, which so far have included burying water underground in vast concrete-lined pits and injecting it into geological strata far beneath the surface.

However, the most favored and least expensive option would be to gradually release the water into the ocean.

South Korea reacted angrily to the proposal, summoning the Japanese ambassador to Seoul to the Foreign Ministry in August to express its concerns. Last week, the government followed up by sending an official letter to the International Atomic Energy Agency (IAEA) requesting assistance in its efforts to ensure that radioactive water was not released from the Fukushima plant. Seoul also said it intended to raise the issue at the IAEA's general conference in Vienna later this month.

Seoul's hostility towards the plan is shared in North Korea, where state media have described Tokyo's suggestion as a "criminal act" that could cause a "nuclear calamity" in the region. "We will never tolerate contamination of our blue sea by nuclear waste," the Rodong Sinmun newspaper said in an editorial on September 4. "Japan should heed the grave warning from the international community, stop taking reckless action and pull out of its plan to discharge contaminated water."

While the average South Korean may disagree with many of its present government's policies, analysts say citizens are firmly behind President Moon Jae-in on this issue. "We are wondering just how Japan could do something so dangerous at this," Ahn Yinhay, a professor of international relations at Korea University in Seoul told DW.

"People are really concerned and I have seen estimates that show that the currents will take any water discharged from Fukushima to the Korean Peninsula in about one year. That means radiation would get into our own domestic fish and seafood catches," she explained, adding that most Koreans have little faith in the promises from the Japanese government that all foodstuffs from the affected regions have been thoroughly tested and found to be safe for human consumption.

Environmental groups are also angered at Tokyo's proposals, which they say ignore the fact that efforts needed to be made to remove dangerous radionuclides from the water.

TEPCO had previously claimed that advanced cleansing processes had reduced cancer-causing contaminants - such as strontium, iodine and ruthenium - in the water to "non-detect" levels and that it was therefore safe to release into the ocean. However, leaked government documents subsequently showed that to be inaccurate and that the water still contained radioactivity at concentrations well above legally permitted levels.

A study by the regional Kahoko Shinpo newspaper confirmed that levels of iodine 129 and ruthenium 106 exceeded acceptable levels in 45 out of 84 samples in calendar 2017. Iodine 129 has a half-life of 15.7 million years and can cause cancer of the thyroid. Ruthenium 106 is produced by nuclear fission and can be toxic in high doses while also being carcinogenic when ingested.

TEPCO later admitted that levels of strontium 90 were more than 90 times above legally permitted levels in 65,000 tons of water that had already been treated at the site.

Meanwhile, environment watchdog Greenpeace has condemned the Japanese minister's comments in favor of releasing the water into the Pacific. The statement is "wholly inaccurate - both scientifically and politically," Shaun Burnie, a senior nuclear specialist with Greenpeace Germany told DW.

"The Japanese government has been presented with technical options, including from US nuclear companies, for removing radioactive tritium from the contaminated water. So far it has chosen, for financial and political reasons, to ignore these," he added.

"The government must commit to the only environmentally acceptable option for managing this water crisis, which is long-term storage and processing to remove radioactivity, including tritium," he said.

South Korea calls for talks with North on family reunions 08.09.2022

Seoul's new conservative government made the offer amid strained relations with Pyongyang over its missile tests. The last reunions were held in 2018.