Iranian police raided and shut hundreds of eateries over a 10-day period for not observing "Islamic principles." Tehran's morality police force was recently bolstered in attempt to enforce strict dress codes for women. 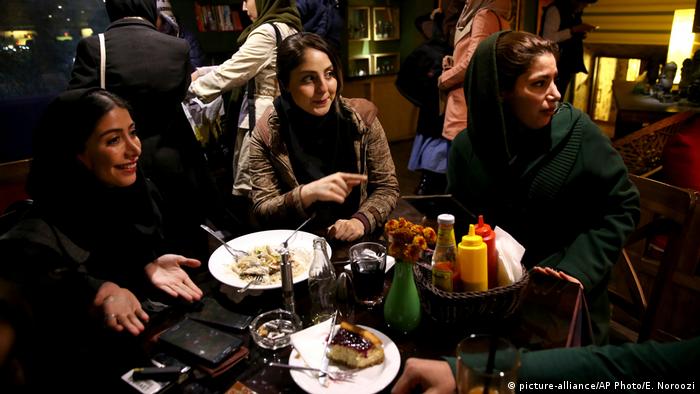 Five-hundred and forty-seven restaurants and cafes in Iran's capital, Tehran, were raided and sealed during the last week of Ramadan, the city's police chief has confirmed.

"The owners of restaurants and cafes in which Islamic principles were not observed were confronted, and during this operation 547 businesses were closed and 11 offenders arrested," Hossein Rahimi said in a statement on police force's website.

Eleven people were arrested during searches of hundreds of premises.

Among the infractions uncovered by police were "unconventional online marketing of the business, playing illegal music and debauchery," the Fars news agency reported.

In recent years, thousands of modern cafes and restaurants have sprung up across Tehran, playing Western music and where many women customers forego their headscarves — for which offenders can be arrested and fined.

In Iran, all restaurants must remain closed during the fasting hours of Ramadan, a rule that some restaurant owners quietly flout, along with the ban on alcohol.

Iran recently stepped up enforcement of breaches of acceptable social and moral conduct, by expanding its so-called morality police by 2,000 units in one northern province, according to Britain's Daily Telegraph.

Teams of six women have begun monitoring the wearing of headscarves, amid concerns that the mandatory laws on veiling are being increasingly flouted. Those caught without a headscarf can be fined up to $25 (€22) and sentenced to two months in jail.

Iran has witnessed a growing protest movement against the compulsory headscarf, with hundreds of women arrested.

In response to demands for change, Iranians are now being encouraged to report cases of "immoral behavior" by SMS.

Under the Islamic dress code of Iran, women can only show their face, hands, and feet in public, and they are supposed to wear modest colors.

Iran: A round trip in pictures

Anyone traveling to Iran will encounter a history and culture thousands of years old, impressive buildings, breathtaking nature — and overwhelming hospitality. (07.06.2019)