Half of Iran wants to drop headscarf laws: government report

President Rouhani released a study showing how drastically public attitude towards mandatory Islamic dress has changed in the past decade. Nearly half of Iranians believe that wearing a hijab should be a private choice. 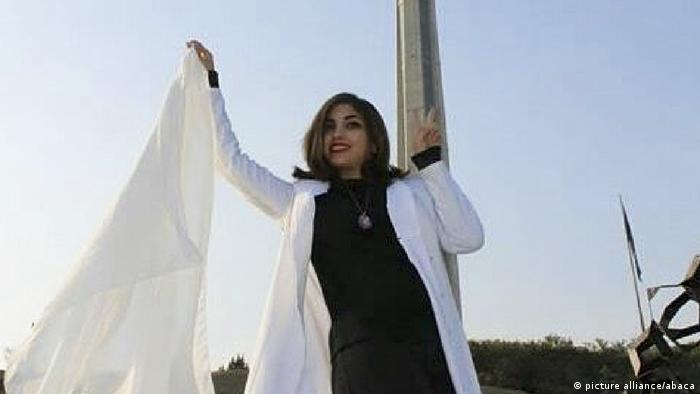 The government of Iran published a three-year old study on Sunday night illustrating growing public distaste for the obligatory hijab just days after police confirmed that dozens of women had been arrested as protests against mandatory Islamic head covering gained momentum.

The study compares data from 2006, 2007, 2010 and 2014 — and illustrates the staggering decline in support for the legal restrictions on women's clothing, one of the major changes pushed during the Islamic Revolution of 1979.

According to the Center for Strategic Studies, which operates as part of the Iranian president's office, in 2006, 34 percent of Iranians believed that the government should not be allowed to dictate what women wear.

"And I'm sure if you ran the survey again today, that number would be even higher," one Iranian woman, who wished to remain anonymous, told DW.

Another interesting data point shows the drop in support for even more restrictive religious clothing. In 2006, 54 percent of those questioned thought that women should wear a chador, a garment that wraps around the entire body, revealing only the face.

The survey also asked whether respondents thought the government should proceed with charges against women who were caught without a hijab in public. In 2006, about half of the population thought they should. But three years ago that number had fallen to just 39 percent.

While it may seem strange to some that the office of President Hassan Rouhani would publish these numbers as Iran's religious police step up their crackdown on anti-hijab protests, it is actually the second time recently that Rouhani has used such a tactic as a slick political gambit.

In December, Rouhani published the government's budget in full, claiming it was in the name of transparency. The president ran as a reformer, and hoped that anger at his lack of real legislative change would be tempered by revelations about how much funding the government is obligated to pay religious institutions and some of their employees.

The move backfired and Iran erupted into protests against the political establishment as a whole, the likes of which hadn't been seen since the aftermath of the country's contested 2009 presidential election.

Anger grew over the stagnant economy and demonstrations cropped up across the country, resulting in at least 21 deaths as protestors clashed with police.

While Supreme Leader Ayatollah Ali Khamenei blamed the protests on foreign agitators, Rouhani instead insisted that the government listen to what the demonstrators had to say.

In addition to the open demonstrations, women have been sharing pictures of themselves in public without their heads covered on the website My Stealthy Freedom.

Demonstrations are spreading across Iran

Mass protests in Iran against the fundamentalist government – and a brutal police crackdown on demonstrations. Is the Islamic theocracy at risk? Our guests: Gilda Sahebi (TAZ), Yalda Zarbakhch (DW), Daniel-Dylan Böhmer (Die Welt).

Even schoolgirls have now joined the ongoing mass protests over the death of a young woman in police custody. These are some of the biggest anti-regime rallies Iran has witnessed in recent years.

Iran continues to be rocked by anti-government protests. Officials have urged security forces to respond harshly to anyone they say is endangering public order. State media reports that more than 40 protesters and police officers have been killed.