Couch surfing in Iran: Close encounters in a foreign country

Many consider Iran a dangerous travel destination. But the Iranians are probably some of the most hospitable people in the world. Join us on a trip through the living rooms of the Islamic Republic. 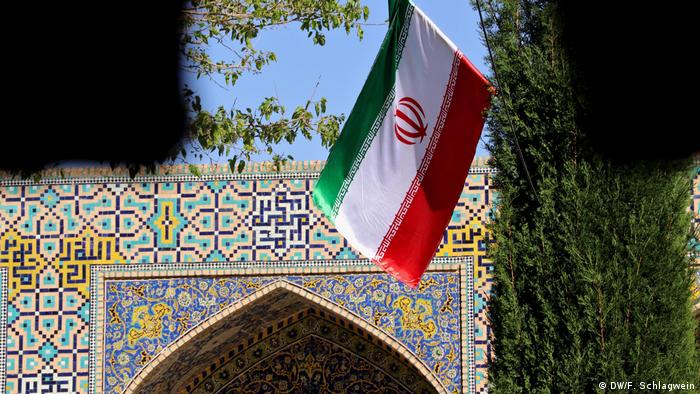 Hossein pretends to throw up and then laughs out loud. The Tehran taxi driver points to an oversized black and white poster, from which Iran's supreme leader Ali Khamenei looks threateningly down on us. A few meters behind it, his predecessor rests in a gigantic mausoleum with golden domes and towers. "No casinos, no disco, no alcohol — not good," says Hossein in broken English. He blames the dead man under the golden domes, Ruhollah Khomeini, known in the Western world as Ayatollah Khomeini, the clergyman who led the Islamic Revolution in Iran 40 years ago and subsequently transformed the country into one ruled by religious leaders. Since then, Iran has gained a bad image, especially in the West. You notice this not only in the media coverage but also in the reactions of family, friends and acquaintances when we told them that we wanted to go to Iran. An unbelieving "What are you going to do there?" or a reproachful "Are you mad? That's dangerous". These were the kind of comments we got to hear. My friend Anna and I were resolute that we wanted to explore Iran and see what can be found behind the facades and veils in what was once Persia. Even before we started our journey we made contact via the homestay platform Couch surfing with numerous Iranians who offered us a place to stay for a few nights — and this, even though Couch surfing is forbidden in Iran.

Most important: Get out of Tehran

Iran's capital Tehran is above all one thing: exhausting. The metropolis of 8.7 million people, picturesquely located at the foot of the Alborz Mountains, is bursting at the seams: The streets are congested, the air dirty, the roads long. After two days we had had enough and headed south. 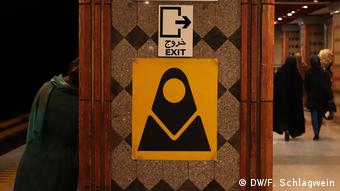 Women and men travel and wait separately in the Tehran Metro

About 200 kilometers (124 miles) south of Tehran you will find Kashan, a beautiful old town on the edge of the central Iranian desert. In contrast to the capital, here almost all women wear the long black chador, an open cloak that leaves only the face uncovered. Our host Bita also wore one when she opened the door for us but took it off as soon as we were in the house.

"The smaller towns in Iran are still very conservative and religious," she explains, "it's actually impossible to go out on the streets with just a headscarf." For the first time, we realized how torn this country is. In Iran, there are worlds separating old and young, conservatives and liberals, Bita says. She has little hope for the future: "Even if the regime should fall at some point, I don't know how this country can be held together." That's why she, like so many Iranians, is thinking about leaving the country.

Bita was a very good host, nearly maternal despite only being a few years older than us — so we felt very comfortable staying with her. But our itinerary meant we had to move on to Isfahan.
The old trading town is rightly called "half the world". Here you can find everything you dare to dream of. Around the gigantic Imam Square, one of the largest in the world, there is an almost endless network of bazaars, where you can get just about anything. As everywhere in Iran, we were courted like kings. Again and again the people on the street greeted us as if we were the first tourists they had ever seen. "Welcome to Iran" we heard countless times. We felt very euphoric. 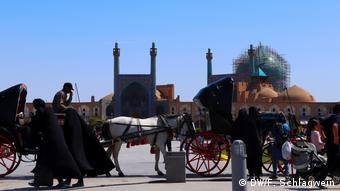 Carriages on Imam Square in Isfahan

In a museum, Ali approached and talked to us. The young man, in his early thirties, comes from Shiraz, a town not far from Isfahan. We arranged to meet him there the next day. He proudly showed us his hometown and took us to the impressive historical sites of ancient Persia, Persepolis and Necropolis. For hours we asked each other questions and talked about Germany and Iran.

Ali did not refer to Iran's supreme leader Khamenei by name, but he spoke of the "crazy Ayatollah". "Every day he and his followers preach how evil the West is. And yet they send their children to Western universities and when they are sick, they go to be treated in the West, not here." Above all, Ali despises the Revolutionary Guards who Iranians call "Sepah". "They're like the mafia in Italy," he says. "They dominate everything: oil, construction, banks, everything. They're getting richer and richer, while millions of Iranians are falling into poverty," he complains. We asked whether he has ever thought about emigrating: "Of course, if my family weren't here, I'd be long gone," says Ali. "But I cannot and will not leave them here." 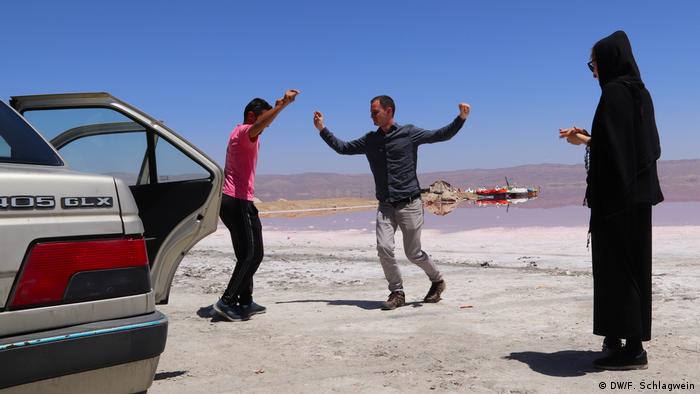 Swinging hips and warbling: learning to dance at Lake Maharloo

We stopped at Maharloo Lake, a pink salt lake near Shiraz. Ali switched on the music in his old Peugeot and we tried our hand at traditional southern Iranian dance. Then we drove for hours through the beautiful barren desert landscapes to the east until we finally reached Kerman. Shortly afterwards it was time to say goodbye. We were close to tears. But our next hosts were already standing in the open door and were waiting for us with dinner.

A visit to the hottest desert in the world

Fatemeh and Mohammad were an odd couple. He was reserved, almost shy, she, on the other hand, was outgoing. Fatemeh took us into the surrounding area of her home, the small town of Mahan. Here we came across what probably is the most beautiful garden in Iran, the Shazdeh Mahan Garden, meaning the Prince's Garden. The meltwater from the nearby mountains flows down in splendid steps from the historic house, in which a Qajar prince resided in the 19th century, to the entrance gate — an oasis in the middle of the desert. Despite the refreshing surroundings, we found the heat hard to deal with. My friend Anna, in particular, suffered under the headscarf and long clothes. 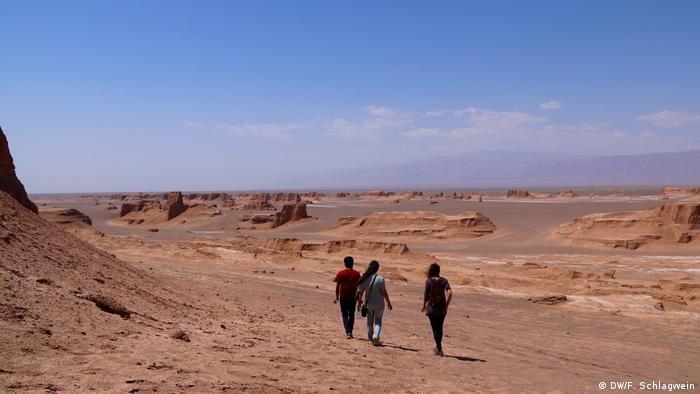 With our "couch-hosts" Mohammad and Fatemeh we visit the hottest desert in the world.

It got even hotter after a two-hour drive from Kerman when we arrived in Dasht-e Lut, the hottest desert in the world. In 2005 an incredible 70.7 °C (159.3° F) ground temperature was measured here! Once you have crossed the mountain range, it immediately becomes incredibly hot. Dryness as far as the eye can see. Like out of nowhere, huge sandstone formations protrude from the lifeless ground. We felt like we were on another planet. Unfortunately, we could not marvel at this unique natural wonder for too long, as the heat with every minute became more and more unbearable. 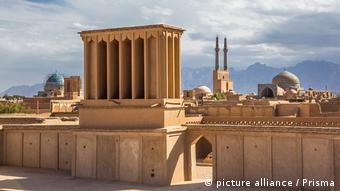 UNESCO World Heritage Site since 2017: the city of Yazd

Following a short stop in the old desert town of Yazd, we continued by night train to Mashhad, the holiest city in Iran and birthplace of the reigning revolutionary leader Ali Hosseini Khamenei. 20 million people make a pilgrimage here every year. They pray at the shrine of Imam Ali Reza, a descendant of Mohammad, who is especially holy to Shiites. We felt very alien here. For the first time, we encountered the infamous guardians of morals, who friendly but firmly asked Anna to bring forward her headscarf to her hairline.

After visiting the really very impressive shrine we wanted to move on. But our hosts Fatemeh and Meysam persuaded us to stay. We visited the 3,000-year-old mountain village Kang and went out in the evening — without alcohol of course (even though many Iranians still drink regularly and we were repeatedly offered wine). 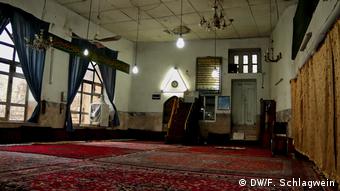 Prayer room in the mountain village of Kang

We asked Fatemeh what it was like to grow up in such a religious and conservative city. "It's annoying that concerts are forbidden here," she says, "I always have to drive for hours to the next town if I want to see my favorite singers." But a lot is changing, as everywhere in the country, says the young woman: "Today we have internet, and we can chat on social media. And even if the government blocks certain sites, we can still get to them through detours."

Between mountains and aircraft carriers

We wanted to spend the last days of our journey, after so many cities and deserts, surrounded by green countryside. Only a few tourists find their way to Iran's northeastern province Golestan. But it is only about eight hours by car from Tehran - making it by Iranian standards nearly around the corner. We stayed with Hossein and Fereshteh. Again from the first moment, we felt more than comfortable. They recommended that we visit the grave of Khalid Nabi on the border to Turkmenistan. What at first might sound like a sad visit to a mausoleum turned out to be a view of an infinitely wide landscape of green and grey hills that simply leaves you speechless. 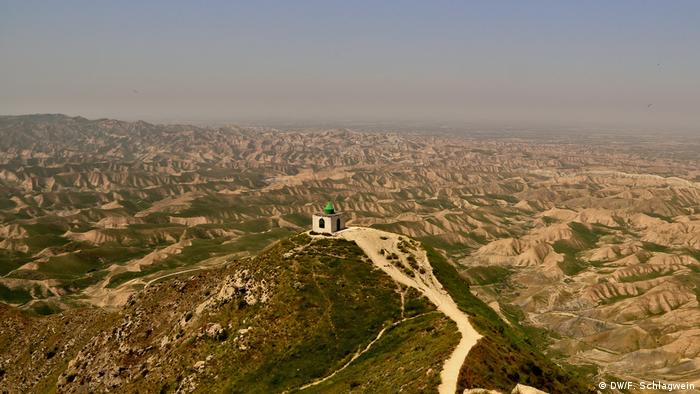 Iran, however, is a country where you can't just enjoy nature. The economic situation of the Iranians is deteriorating on a daily basis, partly because of the renewed sanctions imposed by the USA. While we were hiking in Golestan's mountains, the US president moved aircraft carriers and bombers to the region, and Iran withdrew from the nuclear treaty, and everything seemed to be heading towards war. That made it all the more difficult to say goodbye to Hossein and Fereshteh.

A few days later, when we were on a plane heading back to Germany, we were nevertheless relieved. Especially Anna, who was finally allowed after three weeks to take off her headscarf. We were both however sure of one thing: we would come back. Because Iran is a wonderful travel destination that really has everything to offer: thousands of years of culture and architecture, breathtaking nature and the most hospitable people we have ever met. And although Iran at first glance seems so alien and closed, it is a country you don't have to shy away from. Rather, it is a country in which one, as a traveler, can make friends for life.

Wild nights at the museum: Long-hidden pictures reveal Tehran in the late 70s

Sensational photos taken at the opening of the Tehran Museum of Contemporary Art in the late 1970s were hidden away for decades. Now they are on display in Berlin. (17.02.2017)

How Iran became a cradle of civilization

Rice is the most important side dish to accompany Gheimeh Bademjan, a lamb goulash made with eggplant and yellow split peas. And no one cooks rice like an Iranian, says Saeed Sanatpour of Saray.  (24.05.2017)

After more than two years of pandemic-related restrictions, people are eager to get back to traveling. Let us show you how to satisfy your wanderlust, yet keep your carbon footprint small.

Greece was one of the summer's most popular tourism destinations, especially the most popular islands. The country has a lot to offer to those who want to do something different — and not all the best spots are islands.