Eating a fried tarantula has become a popular photo opportunity for tourists in Cambodia. However, this delicacy is in danger of disappearing, thanks to deforestation and over-harvesting of the spiders. 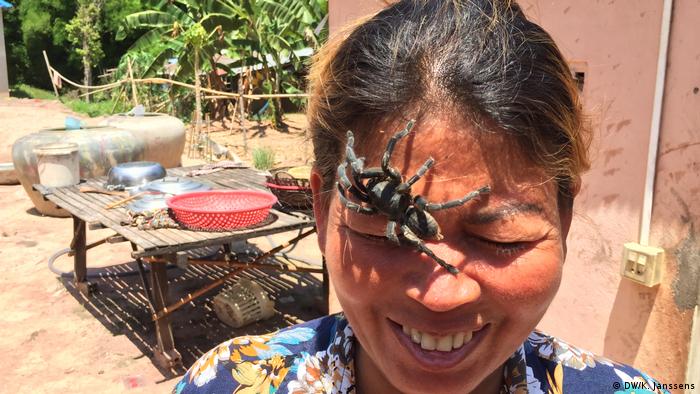 The moment you arrive at the market square in Skuon, you see the tarantula vendors. Most are young girls, who think making tourists shiver by putting whole spiders in their mouths is tremendous fun.

That's about 50 cents (42 euro cents) for what is considered a delicacy in Cambodia, and particularly in Skuon, a town on the road to Cambodia's Kampong Cham province that has earned the nickname "Spiderville."

But supplies of this traditional snack are running low.

Cashew and rubber plantations are fast replacing Cambodia's forests, which are also under threat from a massive illegal timber industry. Since the beginning of the 1990s, the county has lost 20 percent of its forest — which is where the tarantulas live. 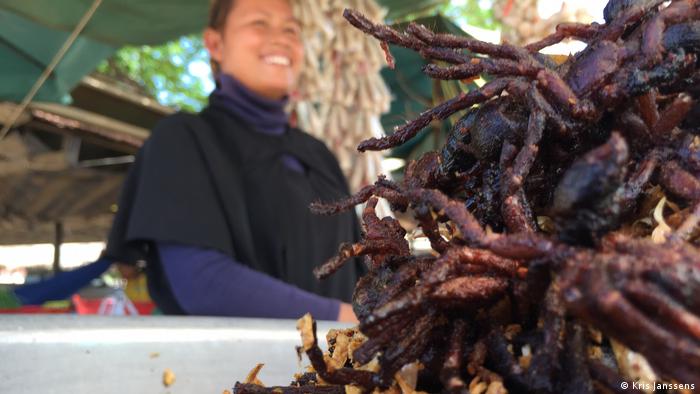 Fried tarantulas are sold at public markets, like this one in Skuon

Still, in that which remains, spider hunter Soy Lon doesn't have much trouble finding her quarry. "They dig a hole in the ground," she told DW. "I've been hunting them for more than 20 years, I recognize these places."

And sure enough, it takes Lon just a few minutes to find a tarantula's burrow and pull the creature out with her bare hands.

Lon's children gather around eagerly. They must have witnessed this scene hundreds of times, but they still shout and squeal with excitement — especially when the spider suddenly escapes their mother's grip and scurries back home.

But Lon is a pro. She retrieves the arachnid effortlessly, caressing it as if it were a pet. Despite the tarantula's fearsome reputation and dangerous fangs, it appears completely harmless and calm in her hands.

"I learned how to do this from my father and my uncle," Lon says. 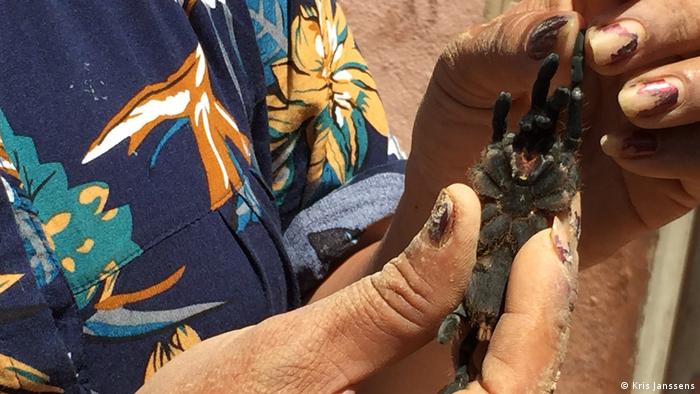 Tarantulas must be defanged before cooking

Cambodians have hunted tarantulas for food and traditional medicine for generations. But under the Khmer Rouge regime of the 1970s, famine made it a necessity.

Soy Lon's aunt, Yee Thon, is 65 and remembers those days well. There were many more tarantulas back then, she recalls.

"They were really everywhere," Thon told DW. "We used to make a fire to drive the spiders into their holes. Once the fire is out, they feel there is no more danger and they usually all come out so we could catch them easily." 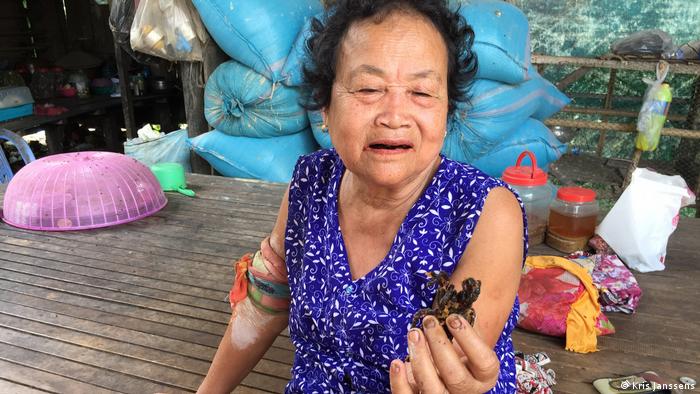 Thon used to wrap the spiders in banana leaves and grill them. Nowadays, they are mostly fried.

Lon arrives home with a bucket full of spiders. First, she removes the living animals' fangs with a pair of tweezers. They may be tiny, but those teeth can give a nasty bite.

"I got bitten once by a big spider," Lon says. "Immediately, my hand started to feel very hot. I rubbed my hand in sand the whole day to cool it down."

Once the tarantulas are defanged, Lon's children play with them, letting them crawl all over their bodies. Then, they clean them with water before their mother kills each one with a sharp jab to the abdomen. "If you know how to do it, it goes really fast," Lon says.

The cooking process is simple, too. Lon rubs them in salt and herbs and drops them into hot oil. They are ready in just a few minutes. "They don't have blood, it's like frying shrimp or lobster," she says. 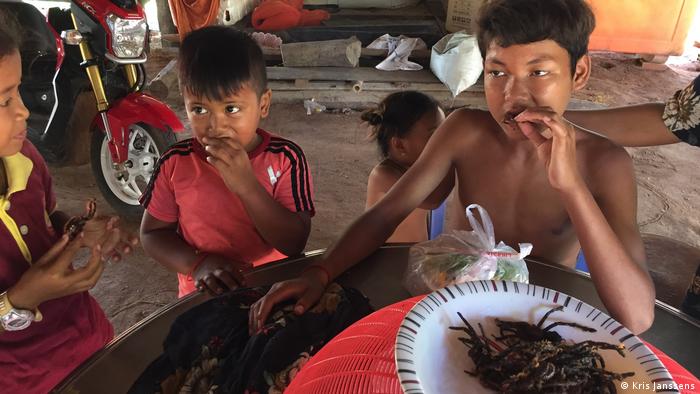 The children wait hungrily at the table and are soon crunching away noisily, legs dangling from their mouths.

They are said to taste something like crab meat, and are just as nutritious.

But with the pressures of deforestation, experts say these days, tarantulas should make up only the occasional treat.

"It's not just habitat loss, but also over-harvesting to meet high demand that is driving the spiders out of existence," Thomas Gray, a biologist and director of Science and Global Development at Wildlife Alliance, says.

Gray doesn't think Cambodia's tarantulas will become extinct anytime soon. But if future generations are to enjoy Spiderville's famous cuisine, the authorities ought to act now.

"I think there should be more regulation about hunting and how many spiders a person should be allowed to catch," Gray says.

The Goliath birdeater is like something straight out of a horror movie. Still, the biggest spider in the world has a softer side as well. (26.04.2018)

The amount of trash dumped by residents of Phnom Penh troubled one man so much that he decided to put it to good use, and turn it into a school. (26.07.2017)

An old man and his spiders

Lab-grown meat could help us decarbonize agriculture and abolish factory farming along with all its environmental and ethical downsides. So why the holdup?