Taliban gunmen and a suicide bomber have attacked a police headquarters in eastern Afghanistan, killing at least five officers and injuring 22. The assault comes as the US is preparing to send more troops to the country. 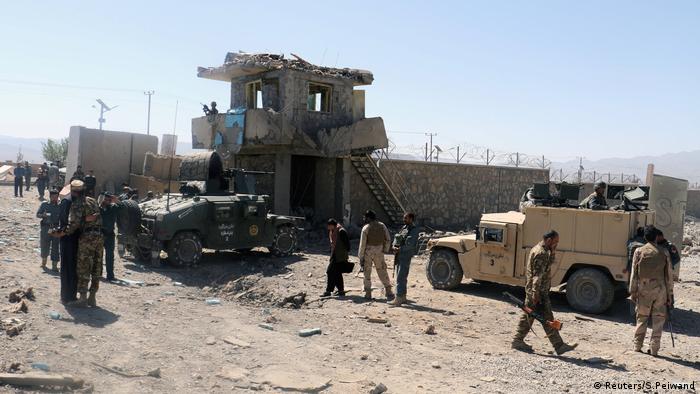 The attack began Sunday morning when a suicide bomber detonated a car laden with explosives at the main entrance of the police headquarters in the eastern city of Gardez in Paktia province.

The blast cleared the way for the other six attackers who stormed the police station and targeted Afghan officers.

Najib Danish, a spokesman for the Interior Ministry, said two gunmen were immediately killed by Afghan police, while the other others held out for hours. It took Afghan security forces most of the day to kill the last gunmen.

Taliban spokesman Zabiullah Mujahid claimed responsibility for the attack in a statement.

"Around 6:20 (local time) this morning, a martyr attack was conducted by our mujahideen against a special forces base in Gardez, Paktia," Mujahid said.

"First a car bomb detonated then our mujahideen entered the building, opening fire on police," he added.

In April, the Taliban launched their "spring offensive" against Afghan and international forces stationed in the war-torn country.

The so-called "Islamic State" (IS) militant group and the Taliban have launched numerous attacks in Afghanistan in the past few months, with experts saying that President Ashraf Ghani's government is failing to protect citizens.

Read: 'China and Russia want US out of Afghanistan'

"The security situation in Afghanistan has deteriorated further. Afghan security forces control only about 57 percent of the country's territory. Around 2.5 million people live in areas controlled by the Taliban and nine million more live in contested areas," Nicole Birtsch, an Afghanistan researcher at the Berlin-based think tank, the German Institute for International and Security Affairs (SWP), told DW.

"The number of civilian victims, including many children, remains high. And many people are internally displaced due to the fighting between government forces and the Taliban," she added.

Sunday's attack came as the Pentagon is getting ready to send some 4,000 additional US troops to Afghanistan.

The latest wave of US troops will mainly be deployed to train and advise Afghan forces, following warnings by top US commanders in the region that the local military was facing a resurgent Taliban and a rising threat posed by IS.