Taliban militants have taken control of large areas of Afghan territory, including key border crossings. But rapid gains may have overstretched their forces on the ground. 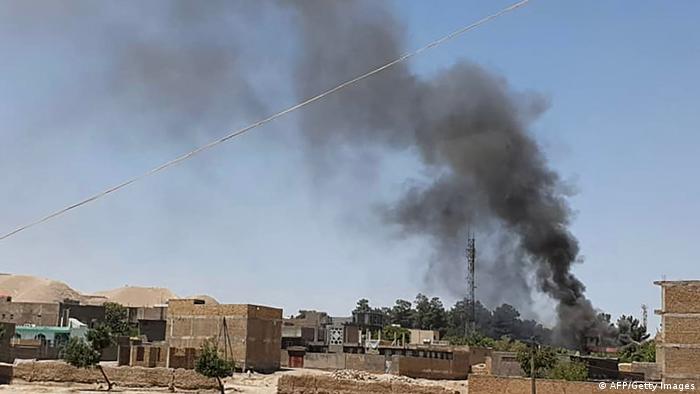 The Taliban appears to have conquered many rural outposts without resistance

The Taliban now controls two-thirds of the Afghan-Tajik border, the Russian Foreign Ministry said on Friday. The militants were also able to capture key economic centers on the border with Iran, Afghan officials announced.

"We have noted a sharp rise in tension on the Afghan-Tajik border. The Taliban movement quickly occupied a large part of border districts and currently controls about two-thirds of the border," a spokesperson for the Russian Foreign Ministry said.

The announcements of key Taliban gains came shortly after President Joe Biden declared that the US military's withdrawal from Afghanistan was more than 90% complete and would be finished by the end of August.

Militants' position not as strong as they claim

Franz Marty, a journalist working in Kabul, told DW that while the situation in the country was dire, the Taliban strategy appeared to focus on rural areas rather than provincial capitals. Marty said the strategy looked like an attempt to gain leverage for negotiations with the government.

He added that the speedy advance of Taliban fighters through the country has left them thin on the ground with "barely any Taliban left" in recently conquered areas, which could leave them open to attack by the Afghan army soldiers who he said have been doing much of the fighting in recent months.

"The fall of the whole country is still unlikely at this time," Marty added. However, the country remains split between those who welcome the arrival of Taliban troops and those who fear what will happen without a US presence.

'Forced to only choose between bad options'

The Taliban had already made large gains in the north of the country, but the news of the fall of two key commercial crossing points near the western city of Herat is a blow to the Afghan government.

The commercial port of Islam Qala on the border with Iran fell to the militants without any resistance, provincial council member Habib Hashimi and lawmaker Reza Khusak Watandost said.

Government revenue from customs at the crossing point amount to more than $3.7 million (€3.13 million) per day, Hashimi said. The port has now ceased all commercial activities.

The militants also said that they had taken control of the key town of Torghundi on the border with Turkmenistan.

The World Health Organization (WHO) expressed concern at the reduced access for aid to the at least 18.4 million people in the country in need of humanitarian assistance.

He said that the UN agency had been asked to stay and continue operations in some of the districts taken over by the Taliban. Some workers had fled health facilities, but others had already decided to return.

Afghanistan is also suffering a third wave of COVID-19 cases. The official record says that around 5,500 people have died from the virus, but Brennan said these figures "represent a significant underestimate."

The country is expecting some 3.5 million coronavirus vaccine doses next week as well as oxygen concentrators.

Trita Parsi: US was never in control of Afghanistan