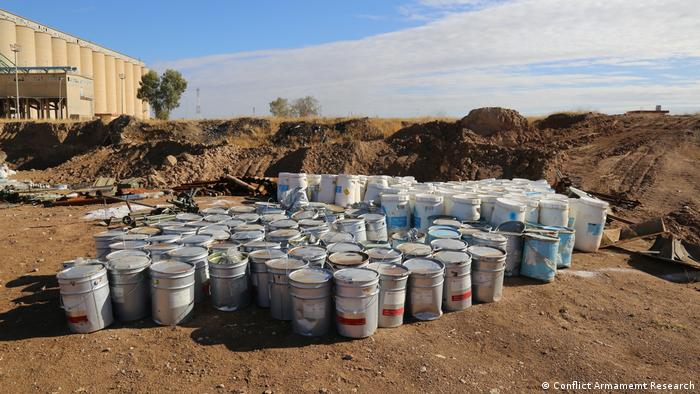 A small phone store buys six tons of aluminum paste. A fertilizer dealer is interested in 78 tons of a food additive. A British company orders motion control software from the United States — but the bill is paid by a luxury car hire company in Turkey.

The organization known as Islamic State assembled the components of its weapons arsenal through transactions like these over years.

IS worked to build up a network of suppliers and technicians that provided he group with an extensive arsenal of weapons, according to a newly published study by the London-based Conflict Armament Research organization. Thanks to this arsenal, IS was able continuously to expand its areas of control in Iraq and Syria beginning in 2014.

According to the study, the border region in Turkey and Syria was a key hub in this supply chain. IS members, usually using false identities, contacted companies in the area and ordered the necessary components to construct explosives and other weapons. The study's authors repeatedly stress that the companies accepted the orders without knowing what sort of customer they were dealing with.

"IS deliberately kept open, as a fallback position, a region where the relevant transactions could be arranged," Peter Neumann, a professor of Security Studies at King's College London, told DW. 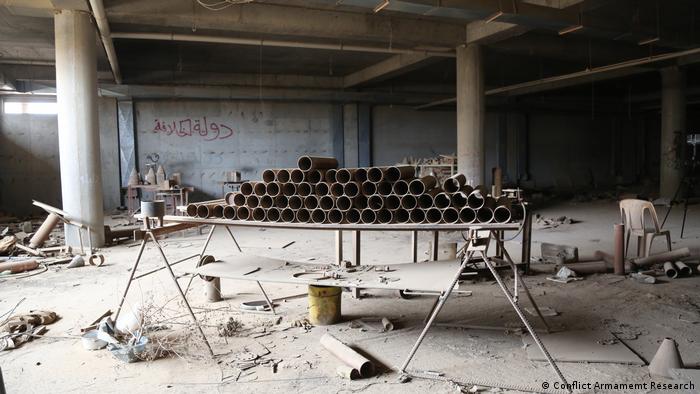 IS then put the weapons together at various facilities

The fact that IS was able to maintain its procurement network for several years is primarily down to the cunning of its middlemen. They were careful always to conceal their identities and communicated with the contractors exclusively via fake email accounts, third-party websites and audio software.

Most payments were made by cash transfer via internationally established providers. Some of the transfers were made from a different part of the world to the one where the order was placed.The study shows that a large quantity of the weapons and military equipment originated from somewhere quite different from where had previously been suspected, Neumann said: "Initially, it was assumed that a great many of the weapons came from the Gulf region — in fact, the weapons were assembled by IS themselves." He added that it has now been established that "the Iraqi and Syrian armies' abandoned stockpiles, which IS took possession of," were another source of arms.

Conflict Armament Research tasked investigators with looking into specific indicators of possible illegal arms procurement and checking their validity. In doing this, they were guided by a whole series of possible indicators. If these started to accumulate, the probability of illegal procurement increased.

The most important indicators included: the appearance of a previously unknown customer whose company was also located in a sensitive region, such as the border area between Turkey and Syria; orders that had little or nothing to do with the company's core business; payment of the invoice not by the customer but by a third party; transfer methods that concealed the identity of the person transferring the money; and unusual routes for the delivery of the material.

The fact that IS maintained its procurement network on Turkish soil for several years is not surprising, Neumann said. "At the time IS emerged, Ankara was initially just as taken aback by its dynamics as other countries," he said. "But IS did not attack any Turkish targets, so the government let the jihadists do as they pleased. Turkey didn't regard IS as its enemy at the time. Also, IS was fighting the Kurds, whom the government in Ankara is also fighting. That was another reason for letting IS do what they wanted. This stance only changed around 2015, when IS was becoming increasingly aggressive and powerful."

Today, the network has, for the most part, been destroyed. IS continues to try to acquire weapons, but Jassim Mohamad, a terrorism researcher who runs the European Centre for Counterterrorism and Intelligence Studies, told DW that  information from the government of Iraq indicates that the organization now only has light weapons — no medium or heavy arms. "IS is believed to have lost both its network and its sources of funding around the world," Mohamad said.

Mohamad said the international coalition against IS, as well as action taken by many governments to combat terrorism, mean that financial flows are now tightly controlled. In addition, he said, the movement patterns of suspected potential terrorists are closely monitored. "This has led to a decline in IS operations worldwide," he said.

Mohamad acknowledges that some networks still exist, but, he said, in Iraq these are limited to criminal structures — and the state is taking firm action against those. "In all likelihood, IS no longer possesses any advanced technology, including chemical or biological weapons," he said. "Because that requires a stable infrastructure and environment — and it doesn't have those."