How is an 81-year-old faring while living in coronavirus isolation? Maria Albel, a Swede living in Berlin, reports about the importance of crosswords, "crisis cuisine," and the kindness of neighbors. 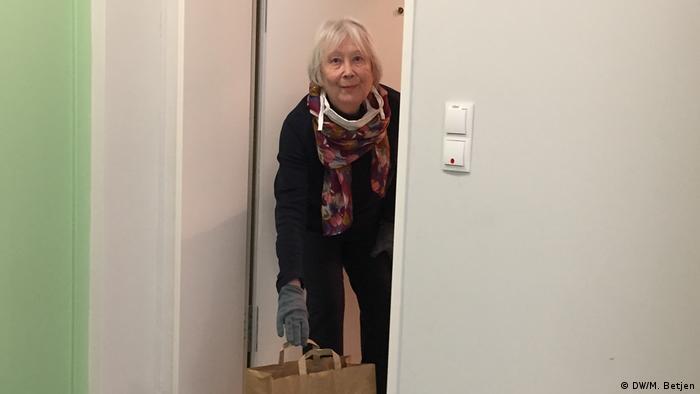 How clueless I was! At the beginning, I thought my "coronavirus house arrest" would last for maybe three or four weeks at the most. But I realized after a few days that that was a fallacy. As an 81-year-old, I am in one of the high-risk groups and I have to be extra careful.

The insight came to me as I stood in front of the bathroom mirror — suddenly the problem was not my wrinkles, but the isolation due to a potentially deadly virus. I examined the old woman in the mirror. Do I really have to put up with being alone with myself for weeks or even months? And in just a 47 square meter (505 square foot) apartment? I can barely get out of my own way, so what can I do to keep from getting on my own nerves? 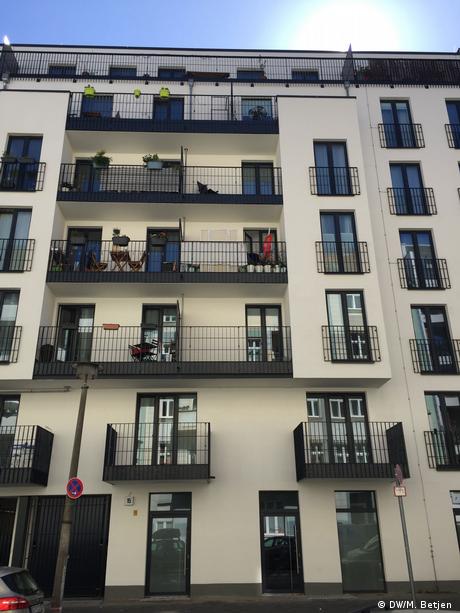 A little self-deception might help. Ever since I was a child, I dreamed of being an artist. I made fantasy worlds out of cardboard, tissue paper and buttons. It wasn't until I retired that my artistic aspirations came back to me. I bought paints, brushes and canvas.

It ended up being far too much, because when I moved from Rostock to Berlin three years ago, life got in between. With me meeting new people, enjoying cappuccinos in cafes, attending courses and going on excursions, my stock of art supplies ended up giving me a guilty conscience. That is, until now.

Now I simply paint away in my isolation — playing with colors and shapes and imagining that this is art. I no longer have time or energy to look critically at the old woman in the mirror.

In the morning, I put on a little "Comme une Evidence." A friend of mine gave me this perfume for Christmas. Before the crisis, I always put some on before I left the house. You never know who you'll meet in the cafe or the supermarket. Now its fragrance is for me only.

A crossword puzzle before bedtime is a must. Unfortunately, there's only one booklet left unsolved. I'm considering whether I should fill it out with a pencil first, then erase it and solve it again with a pen. I could also make my own puzzle, but that would be quite frustrating. 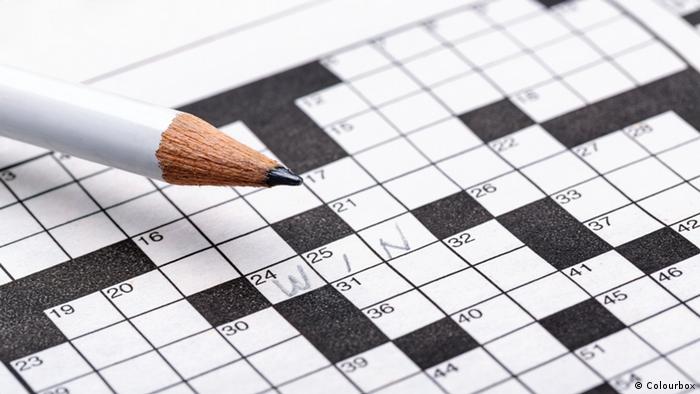 What does a high-risk lady like me really need while in isolation? The first thing that popped into my head was toilet paper. My supplies of flour, milk, bread and other groceries will last for a while. I've organized everything neatly in a list with their expiration dates to make sure that nothing goes to waste in the end.

The thick sardines in rapeseed oil are mild in taste. I'd like more of them. Of course, I would also like to bake bread — the very smell of baking! But when I asked a neighbor on the fourth floor to help me get some yeast, she told me that I could forget about it. Yeast is even harder to come by than toilet paper. The neighbor gave me flowers and told me to call if I need anything or if I get bored. The phone calls often end with a laugh.

Before I moved from Rostock to this newly constructed building in Berlin almost three years ago, my friends and neighbors warned me about the hectic pace, the elbow mentality and the loneliness in such a big city. But when the coronavirus began to spread, several of my new neighbors immediately offered to help me out. They not only said it, they meant it. Sometimes I can't believe how lucky I am in this time of crisis.

I'm so happy when the nice family across the hall rings my doorbell on Saturdays to ask if they can go shopping for me. But with two little girls who aren't able to go to school right now, I'm sure they have enough going on. Anna, a young designer who lives next door, also goes shopping for me. Sometimes she calls while she's in the shop to make sure that she has chosen the right bread or cheese. For Easter, she gave me one of the chocolate eggs that her mother sent her. 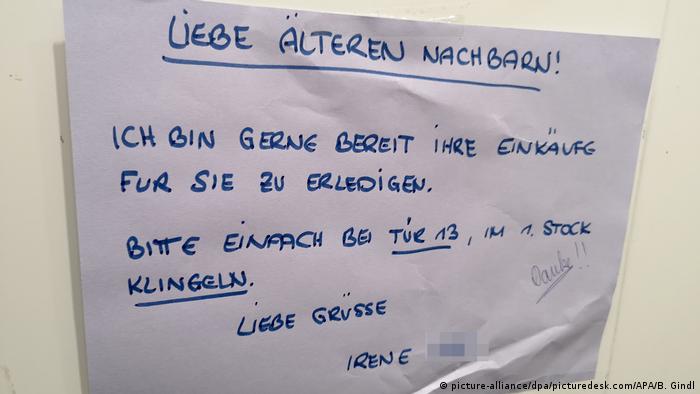 My former neighbors in Rostock can only dream of such caring assistance. Karin and Petra, aged 82 and 87, are the same age as most of the other residents of the high-rise building they live in. Karin and Petra defy the coronavirus and go shopping by themselves. They live in Rostock, not in dangerous Berlin, they assure me — as if this made any difference to the coronavirus. Perhaps by saying this, it helps them comfort themselves a bit.

Fresh air with a face mask

Spring is here! I can't wait to finally enjoy some sunshine and blossoms. For the first time in four weeks, I dare to leave my apartment for a short walk. The streets in my Berlin neighborhood are almost deserted so early in the morning. Nevertheless, I wear a face mask.

I have two of them now, besides my two home-made attempts. My friend Sabine sewed the first mask, while mask number two was given to me by Anna from next door — handed over from balcony to balcony. Her designer mask is not only beautiful, it also fits perfectly. 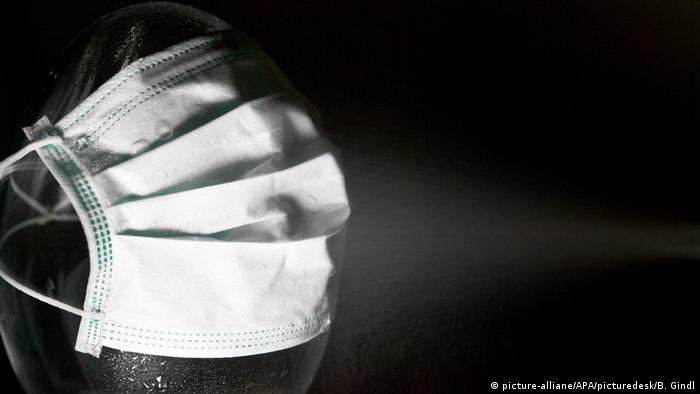 Maria Albel has started going for short walks, but only with her face mask

"Do you really wear a face mask when you leave the house?" My friend Frida in Stockholm can't believe it. In Sweden, where I lived and worked for nearly 50 years, people are more relaxed about the virus. When I called Frida for Easter, gatherings with up to 50 people were still allowed. Television reports showed people enjoying the sun together in cafes and parks. Are they not worried about statistics that show that there are proportionally more coronavirus deaths in Sweden, with its population of 10 million, than in Germany which is eight times larger?

Much more concerning for me is the situation in Spain, where my youngest sister Clara lives with her husband Paolo in Valencia.

"Perhaps so many Spaniards and Italians were infected because they have more physical contact with their families, friends and acquaintances than people in northern European countries," Paolo asks.

"Yes, that could be the case," I answer. "But think about the high death rate in London, Paolo."

For Susanne, my younger sister who lives in Vienna, life is slowly becoming more normal. Some shops in Austria have been given permission to reopen, as is now the case in Germany. People with masks wait in lines to be allowed in, standing at a distance. But Susanne isn't in a hurry to spend her money. Over the past few weeks, she has discovered how relaxing it is to spend hours digging and weeding in the garden.

Sometimes I fantasize about visiting the delicatessen department in Berlin's upscale department store KaDeWe, choosing from an abundance of food from around the world. Sprats in vodka or caviar? Just as a change from the current crisis cuisine. But I'm actually doing incredibly well.

Maria Albel was born in Austria and grew up in the Ruhr region in western Germany. She worked as a local newspaper reporter for most of her life in Sweden. In 2011, she moved back to Germany and has been living in Berlin since 2017. Albel is a Swedish citizen.

Coronavirus in Germany: Oktoberfest canceled due to outbreak

With events banned at least until the end of August, the Oktoberfest has become the latest victim of lockdown. Although slated to start September 19, the world's biggest beer festival will not happen this year. (21.04.2020)

Bavaria has become the third German state to introduce a face mask requirement in public. The state hardest-hit by the coronavirus pandemic will now oblige people to cover their mouth and nose in most public spaces. (20.04.2020)

In a time of crisis, many people are looking for ways to step up and help. One man has turned an unusual hobby into much-needed protective gear to help some of the people most vulnerable to COVID-19. (18.04.2020)