Bavaria has become the third German state to introduce a face mask requirement in public. The state hardest-hit by the coronavirus pandemic will now oblige people to cover their mouth and nose in most public spaces. 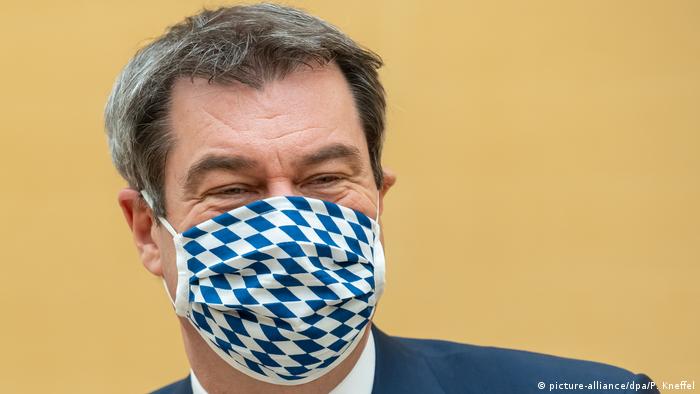 Bavaria became the third German state in a week to announce a face mask requirement on Monday. The measure, which will apply to people shopping or using public transport including taxis, mandates that people wear masks that cover their mouth and nose from next week.

Scarves or improvised cloth coverings can also be used instead of bespoke masks, while medical masks would be reserved for medical workers, Bavarian Prime Minister Markus Söder [pictured above sporting a mask with the Bavarian flag pattern] said in a government statement. "Appeals alone will probably not be the best safeguard," he added.

Bavaria has the highest number of confirmed coronavirus cases in Germany, with almost 38,000 confirmed cases and over 1,280 deaths.

The closure of shops and establishments will also be partially relaxed, but the current contact ban will remain in place until May 4. "Patience has saved lives. Impatience could put them back at risk," Söder said.

While there is no national measure requiring people to wear masks in public spaces, with their use merely encouraged, other German cities and states have taken the initiative to implement such a requirement. Bavaria's move follows the states of Saxony and Mecklenburg-Western Pomerania, who are also requiring their citizens to cover up in public.

Inhabitants of Saxony, the eastern state with Dresden as its capital, are required to wear masks while shopping and in public transport from Monday, while the northern state of Mecklenburg-Western Pomerania is set to see their mask requirement, which will be imposed on public transportation, kick in next Monday.

Meanwhile, the city of Münster, in Germany's most populous state North Rhine-Westphalia, will make masks compulsory in shops, markets, buses and public areas of the city's administrative buildings from next Monday.

The city decided to implement the requirement because more people started visiting the city center again after small shops were reopened this week, under a national plan to loosen some restrictions, according to local newspaper the Westfälische Anzeiger. Anyone who violates the obligation can be thrown out of shops or buses, but fines are not currently planned, a spokeswoman for the city said.

Earlier this month, Jena, a city of 110,000 people in the eastern state of Thuringia became the first German city to implement such a requirement.

To require or to urge?

Despite the requirement in Münster, North Rhine-Westphalia's Prime Minister Armin Laschet has so far rejected the idea of implementing a statewide mask requirement, in favor of urging people to wear masks voluntarily.

"Wearing a mouth-to-nose covering in public can help slow the spread of COVID-19 in the population and protect high-risk groups from infection," the RKI wrote on its website.

While there is considerable debate over whether wearing face masks helps prevent getting the disease itself, many health institutions, including the RKI and the United States Center for Disease Control and Prevention, tend to primarily endorse wearing masks on the basis that they can help stop the wearer from unknowingly infecting others.

"Scientific studies increasingly show that people who are infected with SARS-CoV-2 can excrete the virus one to three days before they develop symptoms themselves," according to the RKI. "Covering the mouth and nose can reduce the risk of infecting another person through coughing, sneezing or talking," the institute said.