Spirit of dissent lives as Czechs mark Velvet Revolution with protest | Europe | News and current affairs from around the continent | DW | 16.11.2019 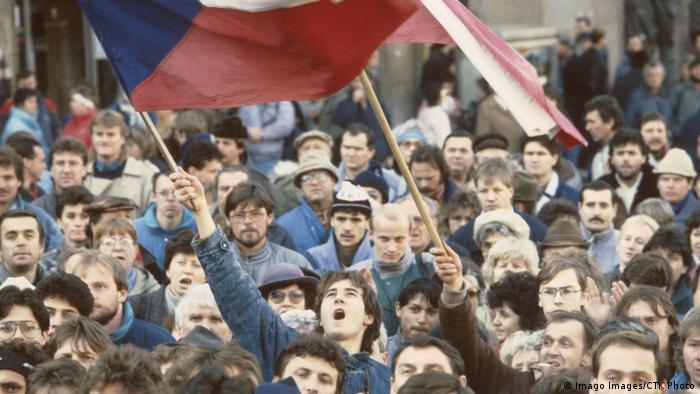 Czechoslovakia's Velvet Revolution was ignited on November 17, 1989 when riot police brutally attacked students who had veered off the route of an authorized march and headed for downtown Prague. The unprecedented violence — and false rumors that a student had been killed — immediately sparked a response. An opposition grouping, Civic Forum, was established and university students went on strike.

Vit Pohanka, then a final-year student at Palacky University in the city of Olomouc, was elected to a hurriedly formed committee to coordinate a protest occupation at his faculty.

"Some of the other organizers were really sure that we would be expelled, and probably that some of us would even end up in prison," says Pohanka, who had been planning to defect to the West as soon as he graduated. "There were moments during the first week when I was quite afraid." 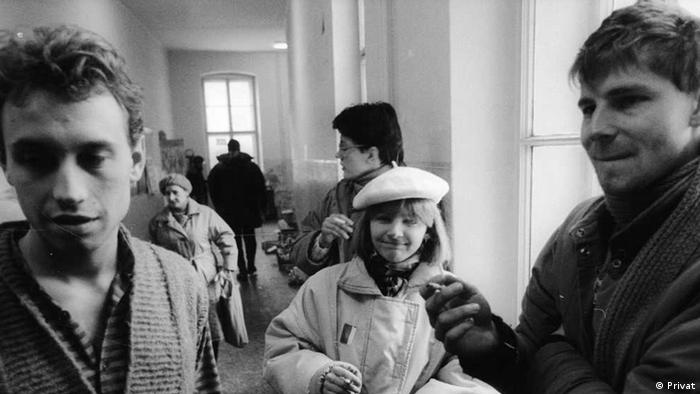 Vit Pohanka (left) during the occupation of Palacky University in 1989

However, the nascent revolution soon gained momentum: Anti-regime protests swelled by the day, a general strike was held, the Central Committee of the Communist Party stood down and on December 29, 1989, Vaclav Havel — a dissident writer who had been in prison earlier that year — was elected president, ending over four decades of communist rule.

Magdalena Platzova, then a secondary school student, had been in the front line during the November 17 police crackdown and remained on the streets of Prague through weeks of demonstrations.

"In 1989 the economy was totally falling apart. The environment was a disaster — it was a poisoned country, basically," says Platzova. "And we suddenly went from this totalitarian, closed country into a country where all of a sudden your life acquired some sense."

Then-student leader Pohanka describes what became known as the Velvet Revolution as the most exciting time of his life. "I was 23 years old and everything was possible," he says. "For us, it was something very euphoric."

Return to the streets

That euphoria has long since cooled.

Czechs are again taking to the streets in large numbers, this time not to protest one-party rule but out of a sense that politicians with roots in the pre-1989 system are once again on top.

"We are still dealing with the legacy of communist leadership," says student Benjamin Roll, deputy head of the civic group Million Moments for Democracy. 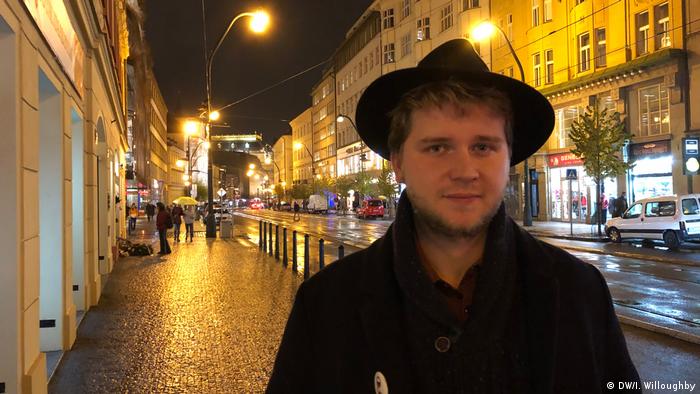 Benjamin Roll stands on Narodni Street, where the Velvet Revolution began in Prague

Babis — who owns a number of major Czech media outlets — is listed as an agent of the totalitarian-era secret police in files held in Slovakia and has faced corruption allegations relating to Agrofert, the conglomerate that made him one of the country's richest people. His ANO party heads a minority government that needs the support of the present-day Communist Party to remain in power.

"Andrej Babis is in major conflict of interest and holds too much power in his hands," says Roll. "We are demanding the resignation of Babis and the minister of justice, Marie Benesova." Benesova was appointed by the prime minister days after police recommended he face trial for alleged abuse of EU subsidies, though that case has since been shelved.

Spirit of the revolution

In June Million Moments for Democracy drew over a quarter of a million people to a demonstration— the country's most attended since 1989 — against Babis at Letna Plain, an open area near Prague Castle that had also drawn the largest gatherings of the Velvet Revolution.

Roll, who is 24 and planning to become a Protestant pastor, says some of those who attend his group's rallies are inspired by the spirit of the Velvet Revolution. 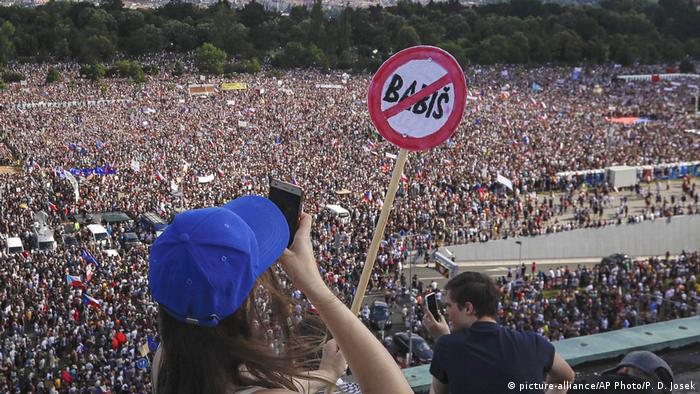 The protesters of 2019 have been inspired by their 1989 predecessors

"The situation around Babis and Zeman is making lots of people remember what they fought for in 1989," he says.

Czech President Milos Zeman is seen as a close ally of Babis's and pursues warmer ties with Russia and China.

Nostalgia for the past

Roll says that many Czechs are disappointed with developments over the last three decades. "Lots of people are really poor — and they didn't expect that after the revolution."

Indeed, a recent opinion poll suggested that 38% of Czechs over the age of 40 believe that their lives were better prior to the change of regime. Among those with less education the figure was 52%.

Sociologist Jan Hartl, who launched the country's first polling agency in 1990, says many older Czechs who hold this view lived in "private escape" during communism, focusing their energies on their cottages and weekends in the countryside.

"They bore almost no responsibility," Hartl says. "The communist regime was one where there was no time, no obligations. There were no big opportunities, but also not a great strain." 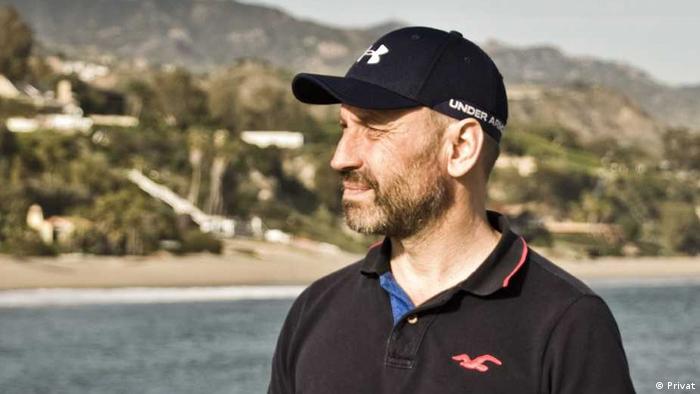 One-time student leader Vit Pohanka says some people's judgment may be clouded by nostalgia. "My generation growing up in the 1980s were under communism, but we were young," he says. "If you remember only the fun things we did, like dating or listening to music, I understand that you might think life was better."

"Just to see people's dead faces back then was enough to see that they were not actually happy," Platzova says. "People would steal at their jobs and then go home and work on their gardens. Nobody gave a s--- anymore." 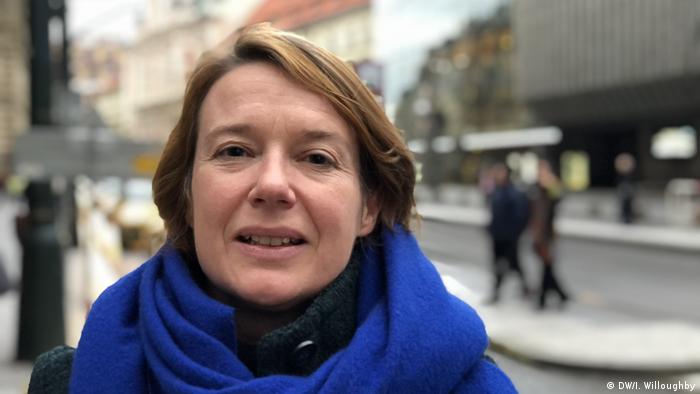 The members of Million Moments for Democracy do care. They are holding another protest against Andrej Babis in Prague on Saturday, while on Sunday, the actual anniversary of the start of the revolution, over 150 smaller demonstrations are planned around the country.

Benjamin Roll says the date of the group's latest actions is not coincidental.

"We want people to remember the Velvet Revolution," Roll says. "We are not doing another revolution or something — we are actually trying to protect what was accomplished in 1989."

Raising the Iron Curtain - The Heroes of Eastern Europe

Inside Europe: Velvet Revolution 30 years on