Young women who flee Venezuela's ongoing economic and humanitarian crisis for a better life in Europe are vulnerable to human traffickers. A raid this week by authorities in Barcelona has exposed a growing problem. 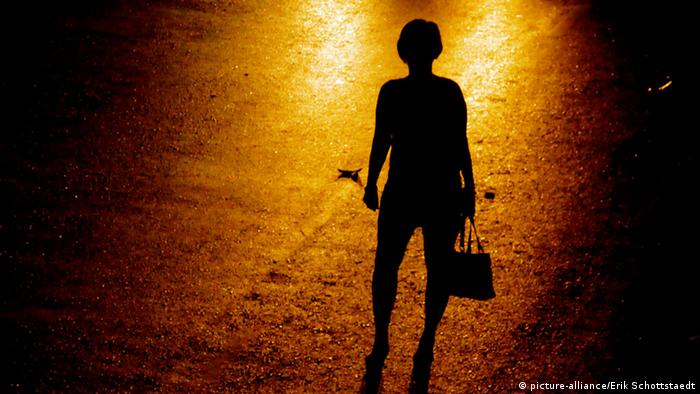 Spanish police uncovered a major sex trafficking ring in Barcelona on Monday. During the raid, authorities arrested eight men and one woman suspected of running the organization, and freed three young, impoverished Venezuelan women, who had been lured to Spain.

The ongoing economic crisis in Venezuela has led to an upswing in traffickers preying on the desperate. Several young Venezuelan women had agreed to work off a debt of €3,000 ($3,670) after being promised that their transport to Spain and other living costs would be taken care of.

The traffickers promised them that upon arrival in Spain, they would have to work just "a short amount of time" to repay their bond. After being discharged from their obligation, they would then be free to start their new lives in the southern European country.

The reality, however, was completely different. Upon setting foot in Barcelona, the women described a living hell of exploitation, intimidation and coercion. The women were often overworked, and even forced to cover the cost of their accommodation through their earnings.

Vulnerability leads to cycle of violence

SICAR Cat, a religious organization in Catalonia that provides help to victims of sex trafficking, is keenly aware of this phenomenon. Spokeswoman Rosa Cendon told DW that the number of Venezuelan women falling pray to modern day slavery has been on the rise in the Spanish autonomous region.

"The trafficking rings take advantage of these cases of vulnerability," Cendon explained. Venezuela's economic slump has led to hunger, high inflation, and scarcity, and has created the perfect conditions for human trafficking to flourish, she added. "The dire situation in the country is pushing people to seek a better future."

Many Venezuelans who fall prey to sex trafficking have already experienced gender-based violence at home. Their vulnerability leads them to seek out some form of escape or a better life abroad. The bitter irony is that these women end up becoming recurrent victims, often stuck in a vicious cycle of abuse.

Any advance in the number of asylum seekers in any given country tends to correlate with a rise in human trafficking victims, Cendon said, adding that a similar pattern has been noticed in Catalonia, particularly among migrants from Venezuela.

According to provisional data from Spanish authorities, Venezuelan nationals top the list of asylum seekers. In 2017, some 10,600 asylum applications were filed by nationals of the South American country. The number far exceeded other countries near the top of the list: Syria (4,300), Ukraine (2,300) and Algeria (1,200).

DW contacted the Spanish Ministry of the Interior to confirm if the number of Venezuelan women victims of sexual trafficking is indeed on the rise, but did not receive a response at the time of publication.

Cendon added that, to make matters worse, there are many obstacles to applying for refuge in Europe. "The fact that certain countries have blocked the opportunity to seek asylum at their embassies is having the effect of increasing human trafficking," she argued.

The Spanish Law of Asylum, passed in 2009, presents a paradox. Legally, it guarantees asylum seekers the right of passage from their country of origin to Spain in order to formally request asylum, but lawmakers have not yet codified the legal terms and conditions for this to happen. Therefore, while asylum seekers have a legal right to be provided with safe passage, there is no procedure with which to carry this out. In the end, they have to find a way to flee their home countries on their own and this is where they get lured by human trafficking groups.

Combatting trafficking is 'the state's responsibility'

One of the biggest obstacles to tackling the rise in sexual exploitation and other kinds of human trafficking is the lack of recognition about the extent of the problem.

SICAR Cat charges that while Spain in principle guarantees basic rights to people who have been victims of trafficking, the government has only recognized some 14,000 "potential victims" of sexual trafficking. Out of those, only 50 foreign victims per year are acknowledged and granted basic rights including a permit to reside and work in Spain. The organization calls this number "ridiculous" and insists that this huge gap is a result of government inaction.

Human trafficking is considered to be the "second most lucrative" practice worldwide, according to the rights group Freedom for All, and while the Spanish government has pledged funds to fight it, Cendon says the amount the government provides is nowhere near adequate.

Her organization has demanded that many more resources are needed to protect victims and prosecute those responsible, as well as education and development funds.

Ultimately, the organization decried that this sensitive issue has been left mostly to be dealt with by NGOs. "Human trafficking is a violation of human rights and as such it is the state's responsibility," Cendon declared.