Soviet cult and pragmatism in Transnistria | Europe | News and current affairs from around the continent | DW | 29.03.2014

Experts worry that the next "Crimea" could be the breakaway region of Transnistria. Many locals there don't share that fear, and if the last referendum holds, a large majority would welcome a Russian annexation. 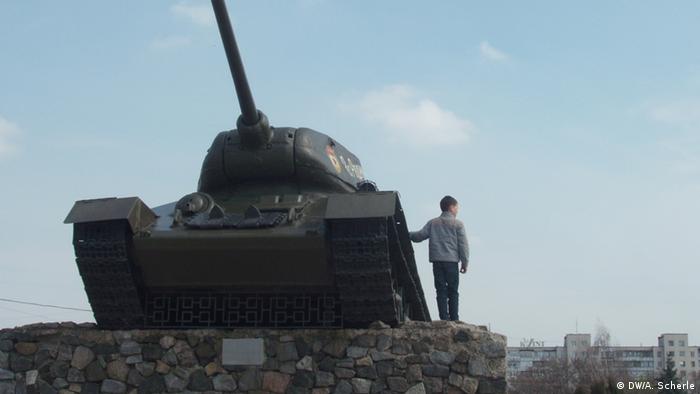 The Soviet tank in the city center of Tiraspol has many friends. For one young boy, the war memorial has become something of a climbing wall. He makes his way over the hull, glances around curiously at the panorama of prefabricated housing, and waves at his grandmother, who waits for him below. Teenagers, too, seem to like the tank, where their friends photograph them. Nearby, the gilded dome of a small Russian Orthodox Church glows in the spring sunshine. Even higher than the church steeple, a statue of Vladimir Lenin looms against the blue sky and a parliament building called "Supreme Soviet" - all in a country which, according to international law, does not exist. 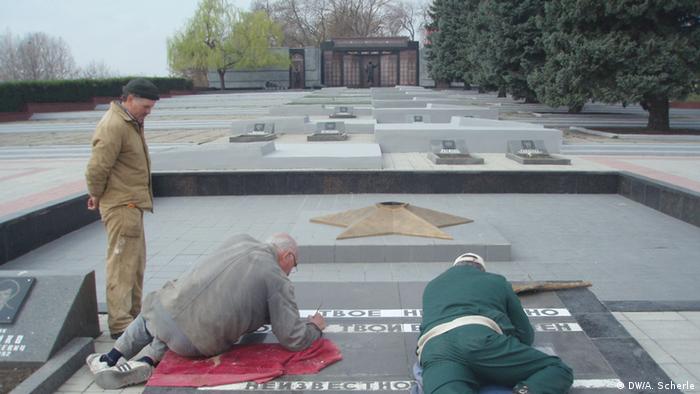 Work continues on a soldiers' memorial in Tiraspol

After a brief military conflict, Transnistria split from the Republic of Moldova in 1992. It has never been recognized internationally by any state. Russian troops are still stationed in the separatist region. In a 2006 referendum, roughly 97 percent of its citizens voted to join the Russian Federation. The president of Transnistria's parliament recalled that vote last week, according to Russian newspaper "Vedemosti."

He was reported to have requested that Russia create a legal basis for the annexation of Transnistria.

'Russia on the right path'

"We Slavs should live under Slavs - and Russia is on the right path politically," said a man with a gray moustache, browsing a Tiraspol flea market. A blind street musician played the accordion while older people offered their wares, from buttons with Soviet symbols to secondhand shoes and plumbing pipes. Like the moustached flea market visitor, 60 percent of Transnistria's half-million citizens speak Russian. The man said he has nothing against the Republic of Moldova or its Romanian-speaking people. He studied engineering in Moldova's capital, and said he is not interested in speaking Romanian, the official language of Moldova, to which Transnistria continues to officially belong.

But when it comes to political problems, in his view, it isn't Moldova's government that is at fault, but rather a great conspiracy by the United States. "Yugoslavia used to be a paradise, but the Americans turned it into hell," he said. "They've now done that with Ukraine - and that will also happen in Moldova." 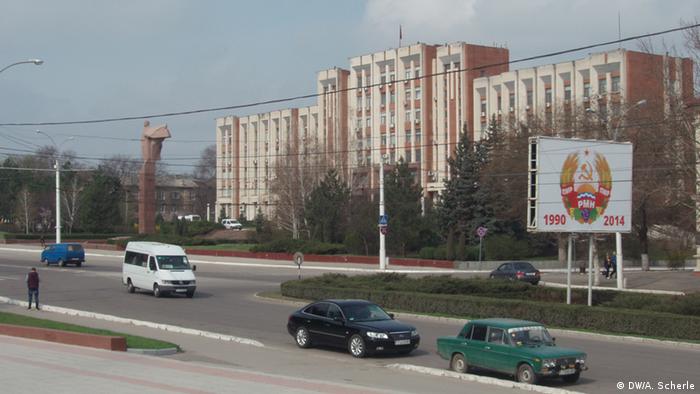 A statue of Lenin stands in front of Transnistria's parliament

For a middle-aged math teacher, "No chaos like in Ukraine" is the most important goal. Russian troops in Transnistria, she said, will ensure that. She said she would endorse a union with Russia without hesitation and called the new leaders in Kyiv "fascists!"

This interpretation of events is consistent with statements made by Russian President Vladimir Putin and Russian state media popular in the region. The teacher said she has no fear of crisis enveloping the region since, "The troops from Russia protect our borders well."

An open air museum of the Soviet Union?

But not everyone sees Moscow as a friend and helper. An elderly woman reading a book in the sun first looks around carefully before speaking. "I'm Ukrainian," she whispered. "How could I be in favor of an annexation of Transnistria to the Russian Federation?" She and others did not want their names in the media and requested no photos be made of them.

In Western guidebooks, Transnistria has been referred to as "an open-air museum of the Soviet Union." But even here, time does not stand still. At first glance, it rather appears that several eras coexist simultaneously: The secret service of the authoritarian state, which is not really a state, is called the KGB - as it was in the Soviet Union. The Communist hammer and sickle symbols and statues of Soviet heroes would raise the heart rate of just about any nostalgic former Soviet citizen. But colorful posters advertising new smart phones are also to be seen on the road between Tiraspol and the city of Bender on the Transnistria-Moldova "border."

Hoping to study in Moldova

In Tiraspol, fashionably dressed young people talk about their future, one which they don't always imagine in Transnistria. A young woman with blonde curls said she'll probably study in Moldova, since "there's education on a European level there." 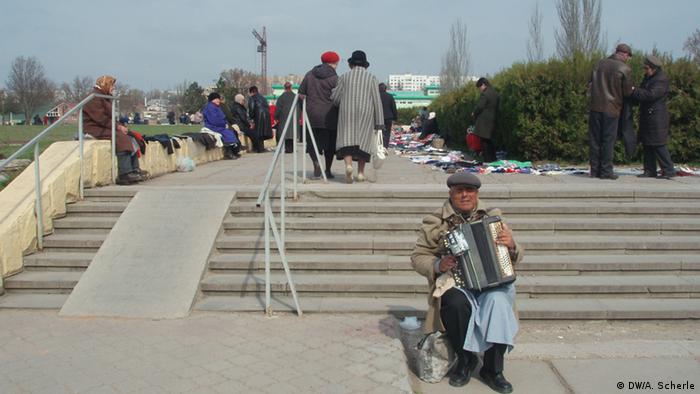 An athletic young man in a tracksuit explains in Romanian that he has a positive attitude towards Moldova. But everything comes down to living standards.

"If they were as high in Moldova as in Russia, even people from Russia would want to move there," he said. In Russia, he worked in construction "for good money." He said he knows Moscow supports people in the breakaway region of Russia - such as with pensions subsidized by the Russian state. Additionally, fuel and natural gas are cheaper in Transnistria than in Moldova. His wife added that people in Crimea would surely benefit from being a part of Russia. "They'll get better pensions than before."

And why is Russia alone so attractive for young people likely to view themselves as pragmatists - and not the European Union, with its higher living standards? The man in the jogging suit shrugs and lets his gaze drift off into the distance: "Because I've never been to Europe. I don't even know anything about it."

Political scientist Kai-Olaf Lang tells DW that the Baltic states are worried about further territorial claims by Russia. Their defense plans are already on the table for the worst case scenario. (23.03.2014)