South Koreans resist arrival of Yemeni asylum seekers | Asia | An in-depth look at news from across the continent | DW | 26.06.2018

There has been a backlash after a thousand Yemenis exploited a visa loophole to apply for refugee status. Many South Koreans are concerned that Muslims will fail to integrate into their society. 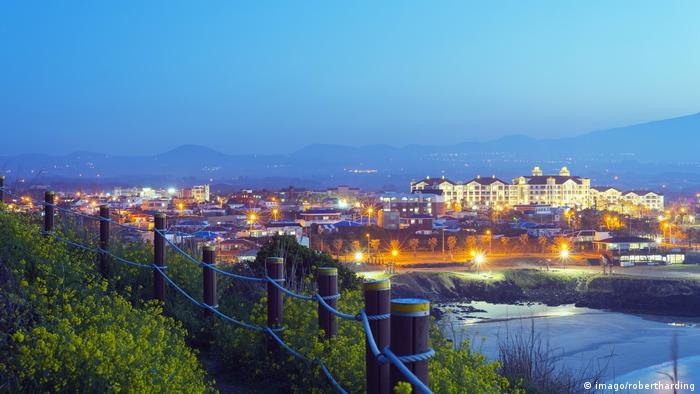 An influx of nearly 1,000 Yemeni asylum seekers into the South Korean resort island of Jeju has triggered a fierce backlash against immigration rules that many South Koreans perceive to be lax and dangerous to the well-being of their society.

The concern has grown suddenly with 950 foreign nationals — the majority fleeing conflict-wracked Yemen — applying at the Jeju Immigration Office for legal refugee status after arriving as tourists.

In the whole of last year, only 312 people applied for refugee status on Jeju and local people fear their island is being targeted as an easy way into the East Asian nation.

"It has become really bad in recent weeks and it is all because Jeju introduced a program that enabled people from 186 countries to come here without a tourist visa," said Hank Kim, owner of the Core Travel Agency. "It is meant to promote tourism but these people have realized that it gives them an easy way into the country," he told DW.

"And local people here are worried," Kim added. "We have all read about the problems that immigrants have caused in Europe — in Germany and France in particular — and we do not want that to happen here.

"And we are also worried because of their religion," he admitted. "We have had no contact with Muslim people before, but we know that they all have big families and they bring their own culture instead of trying to adapt to the place where they live, so people here think that they should have gone as refugees to other Muslim countries."

Feelings are running so high across the nation over the Jeju provincial government's refugee-friendly policy that more than 380,000 people have signed a petition on the South Korean presidential Blue House's official website against the visa-waiver program, while a demonstration is scheduled to take place in central Seoul protesting against the influx of foreign refugees.

A post on a blog announcing the demonstration said, "Politicians are reluctant to respond to the clear voices of the majority of people and the media also supports refugees. It is time to go out onto the streets and make our voices heard."

Under Jeju's visa-free program, foreign visitors are permitted to stay for up to one month, but an application for refugee status permits them to go to court to support their claim, a process that will take years, critics say.

Facing mounting criticism of his policy, Jeju Governor Won Hee-ryong said on Sunday that he will not permit the island to "bear the burden" on its own and that he has called for discussions with the national government to find a solution to the problem that involves moving the refugees out of Jeju and into mainland South Korea.

"I will directly meet with President Moon Jae-in in order to better manage Yemeni asylum seekers and ensure a speedy — and strict — review process for accepting them," he told reporters.

"The regional government will undertake all administrative measures to mitigate the fears of local residents and citizens," he added.

South Korea has accepted 31,500 North Korean nationals who have defected since the end of the Korean War in 1953, but only started accepting refugees in 1994. To date, nearly 40,500 people have applied to be recognized as refugees and slightly over 35,000 remain in the country.

Last year, a total of 9,942 foreign nationals applied for asylum in South Korea, with 3,264 applications turned down. Officials anticipate having to deal with more than 18,000 applications this year.

Many in South Korea accuse new arrivals of being economic migrants looking to take advantage of their nation's hard-earned wealth, healthcare and other services.

According to public opinion polls, 49 percent of South Koreans say the Yemeni asylum seekers should be sent back to their own country, with 39 percent saying they should be permitted to stay.

'Brink of a crisis'

Song Young-chae, a professor at the Center for Global Creation and Collaboration at Seoul's Sangmyung University, said he will be taking part in Saturday's protest march in Seoul.

"There are many people, including me, who sense we are on the brink of a crisis," he said. "We have seen on television just how many problems are caused when a country like Germany or the UK is relaxed about immigration and the damage it does to societies."

As examples of the problems that Muslim immigrants cause, Song cited the "grooming gangs" who convinced or coerced vulnerable young women in cities in northern England to have sex with them and incidents of sexual assault of women on New Year's Eve in Germany.

And, he adds, that is before we consider the various acts of terrorism that have been perpetrated by Islamists.

"There are already Muslims living in South Korea, many of whom have married a Korean and been granted permanent residency here, but they still choose to live in their own districts and make no effort to integrate into this society," he said. "They also attempt to convert Korean people into their religion.

"People here are very opposed to the government's policy on immigration because it is making South Korea an easy target for economic migrants," he said. "This is our country and we do not understand why we need this very dangerous policy."

Many in South Korea have complained about what they perceive as growing intolerance against foreigners, pointing to Korean-only bars. DW takes a look at the reasons behind this development. (24.02.2016)

The Japanese government believes the nation needs to address the problems of a falling birth rate and a rapidly ageing population, but the general public remains wary of outsiders. Julian Ryall reports from Tokyo. (10.10.2016)

The justice ministry said the figure was a significant jump from 2014, when it accepted 11 refugees. Japanese human rights organizations have called for the government to recognize more asylum seekers. (23.01.2016)