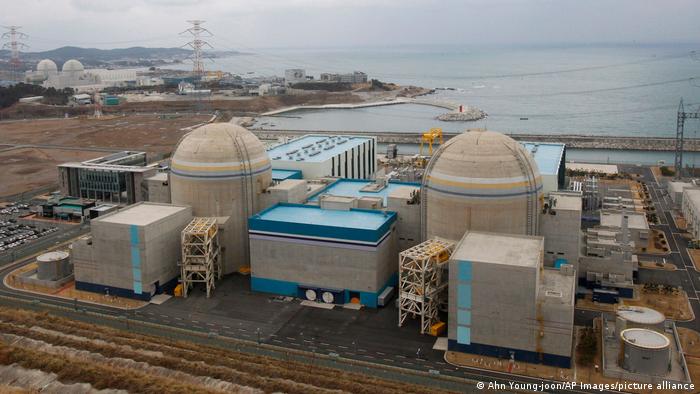 South Korea's new President Yoon Suk-yeol has wasted no time in committing his administration to resurrecting the nation's nuclear energy sector. This marks a dramatic policy reversal from his immediate predecessor, whose approach was condemned by both sides of the atomic energy debate.

Yoon was recently in Europe for the G7 and NATO summits, where he held meetings to promote South Korean nuclear energy technology. The issue was discussed with the leaders of Poland and the Czech Republic — both of which are close to selecting contractors for their new nuclear power plants — while Britain, Romania and the Netherlands are also seen as potential customers.

"We will go all in to win orders for nuclear power plants," Choi Sang-mok, senior presidential secretary for economic affairs, told reporters in Madrid this week.

"For the past five years, we saw a contradictory situation where at home we were seeking to go nuclear-free, but overseas we were pursuing exports of nuclear power plants," Yonhap News quoted Choi as saying, referring to the policy of the previous administration under Moon Jae-in, who stepped down in May.

"The nuclear industry was practically on the brink of collapse, but now we plan to resume nuclear power exports," Choi added.

Moon was elected in 2017 on a platform of scrapping the country's nuclear reactors following heightened concerns about safety. Once in power, however, his staunch opposition to atomic energy weakened, and he even spoke out strongly in favor of selling Korean nuclear know-how overseas — a position that saw him labelled as a hypocritical.

Yet South Korea's relationship with nuclear energy is a complicated one, says Daul Jang, a nuclear energy analyst with the Seoul office of Greenpeace.

"South Korea got its first nuclear reactor in 1978, under the Park Chung-hee military dictatorship, but there was opposition from the outset among people who lived near the plant and were worried about an accident, and there has also been the long-running issue of how to dispose of high-level nuclear waste ever since," he told DW.

Korea built up its domestic nuclear energy sector with US technology securing confidence in its safety and reliability. And while the 1986 accident at the Chernobyl nuclear plant was largely dismissed as being impossible in South Korea, attitudes changed dramatically after an earthquake and tsunami destroyed three reactors at the Fukushima Dai-Ichi nuclear plant in nearby Japan in 2011, Daul said.

"The attitude in Korea was that an accident like Chernobyl could never happen here because we believed our technology was simply better, but then Fukushima happened and that changed," he said.

The industry's case was not helped by a series of major scandals at companies in the nuclear sector, including the use of substandard equipment in plants, corruption and cover-ups. Opposition became so fierce that two communities earmarked as the sites of new power plants held referendums that overwhelmingly rejected the government's plans.

Fears reached new heights in 2016, when a magnitude 5.8 earthquake — the largest in recorded history — rocked the southeastern region of the Korean peninsula, where the majority of the nation's nuclear plants are clustered.

Sensing the public's mood, Moon incorporated a plan to do away with South Korea's nuclear energy sector into his election manifesto, landing him the victory in the 2017 election.

Moon cancelled six reactors that were in the planning stages. However, conscious of South Korea's power-hungry industry and lack of abundant natural resources, he permitted the continuation of work on a further five that had already broken ground. And while the operational lifetimes of other reactors would no longer be extended, the new reactors were set to continue operations until 2085, Daul points out.

That perceived duplicity, combined with Moon's continued efforts to push Korean nuclear technology abroad, was seized upon by his political rivals, including the up-and-coming Yoon.

"The opposition, the nuclear industry and even environmental groups said it made no sense that Moon said he was committed to phasing out nuclear energy at home at the same time as he was promoting it as a key export," said Park Saing-in, an economist at Seoul National University.

"Those groups rarely agree, but on this they did agree: He was being hypocritical."

And Park suggests there was more public support for nuclear energy than environmental groups believe.

"The confused policy on nuclear energy has caused a lot of resentment in many communities," he said. "When work on plants was halted, a lot of small, local companies that were relying on those projects went bankrupt and people lost their jobs."

"Those people probably voted for Yoon in the last election and they are happy that he is putting so much emphasis into nuclear energy again," Park said.

Park also played down safety fears in communities close to plants and the potential dangers posed by seismic activity, insisting earthquakes on the Korean Peninsula are invariably smaller and less destructive than in Japan.

"In comparison with the safety concerns of people in Japan, the US and Europe, I think Korean people are more relaxed and even positive about nuclear energy," he added.

And with the world seeking long-term solutions to fossil fuels and atomic energy gaining acceptance as a "green" energy, Park believes South Korea's nuclear sector is in a good position, both at home and abroad.

"A lot of countries are looking for the skills and know-how required to safely produce nuclear energy and the government and domestic industry are confident they can deliver that," Park said. "This is a good opportunity to export a Korean capability to other parts of the world."