South Korea's opposition conservatives have won the presidency after one of the most bitterly contested campaigns in recent history. Conservative candidate Yoon Suk-yeol took the vote by slightly less than 1%. 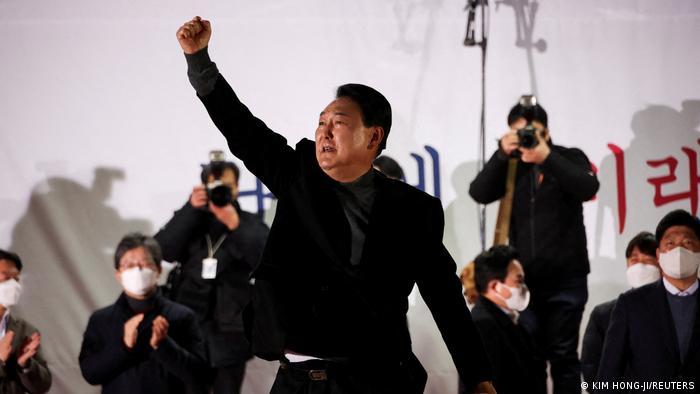 Yoon's conservatives have been embattled by scandals, but were able to secure victory

Lee concedes: 'I did not live up to expectations'

Japanese Prime Minister Fumio Kishida welcomed Yoon's victory and said he hoped to work closely with him to rebuild healthier ties with its neighbor.

"I offer my heartfelt congratulations on his election," Kishida told reporters.

Fumio added that current "fraught" ties needed to improve, in a reference to tensions over historic and economic disputes dating to Japan's 1910-1945 occupation of Korea.

Biden said he looked forward to working closely with him to bolster their alliance.

The conservative candidate, speaking at a victory ceremony with his supporters Thursday said he would "sternly deal" with the threat posed by North Korea.

"But the door to dialogue is always open," he said.

"I would pay attention to people's livelihoods, provide warm welfare services to the needy, and make utmost efforts so that our country serves as a proud, responsible member of the international community and the free world," Yoon said Thursday.

Who is South Korea's new president?

Yoon was formerly a top prosecutor in South Korea, and is relatively new to politics, having risen through the ranks as a public prosecutor.

As the candidate for the People Power Party, Yoon vowed to root out corruption and take a hawkish line toward North Korea.

A victory for Yoon represents a remarkable turnaround for the conservatives that have been in disarray since the impeachment and dismissal of President Park Geun-Hye.

Presidents serve a single term of five years. Yoon's term will begin in May.

The election had become a tight race between Lee and Yoon. However, both were so unpopular that local media dubbed the contest the "election of the unfavorables."

Yoon has been accused of being "anti-feminist," while Lee has faced multiple scandals.

Lee was governor of the most populous province of Gyeonggi.

He shot to fame with his aggressive coronavirus responses and a slew of fresh policies, including a universal basic income and free school uniforms.

What were the key issues?

Top concerns among young voters were the skyrocketing housing prices in the capital, Seoul, domestic inequality, and stubborn youth unemployment.

Both candidates vowed to build new homes but offered starkly different solutions to the crisis. Lee relies on left-leaning public housing and Yoon on market-led solutions.

North Korea also remains one of the major issues.

Pyongyang has carried out a record-breaking blitz of weapons tests this year, including a launch just days before the election.

The conservative has promised to take a tougher line, and has called for greater cooperation with the US to confront the threat posed by Pyongyang

From independent films to hit series streaming on platforms like Netflix, South Korean films are capturing audiences around the world. What's behind their success?

North Korea: US and allies at UN condemn missile launches

North Korea has tested nine missiles since the beginning of the year. Eleven countries have called on the UN Security Council to condemn Pyongyang's actions.