Despite sanctions, North Korea has been steadily ramping up missile tests, firing a record number of weapons last month. 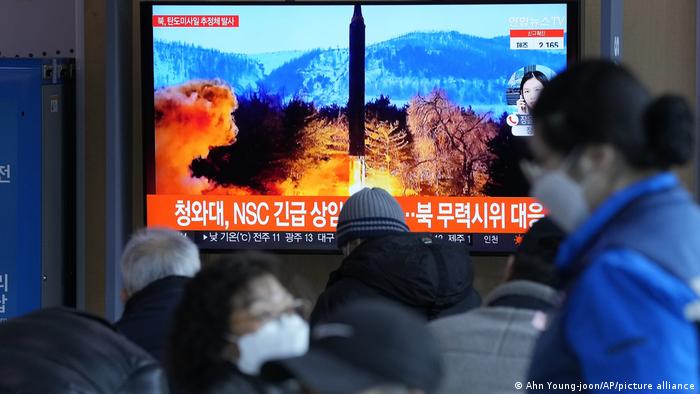 North Korea launched a suspected ballistic missile, as talks with the US remain stalled

South Korea's Joint Chiefs of Staff said the missile was launched from a location near Sunan, where Pyongyang's international airport is located.

Japanese Defense Minister Nobuo Kishi said Sunday's missile may have flown as high as 600 kilometers (400 miles), to a range of 300 kilometers (200 miles).

"There have been frequent launches since the start of the year, and North Korea is continuing to rapidly develop ballistic missile technology," Kishi said in a televised statement.

Kishi added that North Korea was threatening the security of Japan, the region, and the international community.

The South Korean National Security Council said the North's missile launch was undesirable while the world was trying to resolve the Ukraine crisis, while the US military's Indo-Pacific Command called upon North Korea to "refrain from further destabilizing acts."

US President Joe Biden imposed sanctions on North Korea in January, even as his administration sought to engage Pyongyang in dialogue in a bid to persuade it to give up its nuclear weapons.

It conducted its last test on January 30, when it launched a  Hwasong-12 intermediate range ballistic missile, the largest weapon fired since 2017.

North Korea, which has close ties to China, did not test any missiles during the Beijing Olympics in February.

South Korea's leading conservative presidential candidate warned last week that the North could see the crisis in Ukraine as "an opportunity for launching its own provocation." South Korea's presidential election is March 9.

Analysts have noted, however, that North Korea was steadily ramping up missile tests even before Russia invaded Ukraine, and as talks with the US and allies remained stalled.