North Korea has conducted multiple high-tech missile tests since the start of the year. But analysts say Pyongyang is now more likely to tread lightly with its weapons testing, so as not to draw more global pressure. 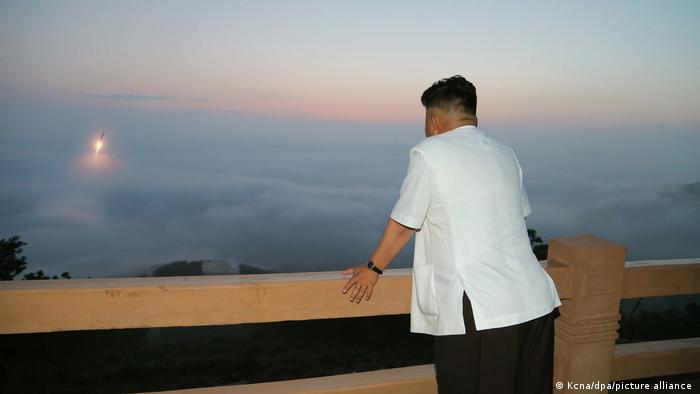 Kim Jong Un's regime has pushed ahead with weapons tests, arguing that it has a right to self-defense

North Korea began the year by testing what Pyongyang claims is a new type of "hypersonic missile," in the country's first weapons test since autumn 2021.

As the reclusive East Asian nation continues developing high-tech weapons systems, some tests over the past months have shown potentially big steps. Others, meanwhile, have looked like adaptations of previously available technology.

Pyongyang confirmed it had tested a Hwasong-12 "mid-range ballistic missile" on Sunday, according to state news agency KCNA, and released photos purporting to show a successful test launch.

The Hwasong-12 is a nuclear-capable ground-to-ground missile. It has a maximum range of 4,500 kilometers (2,796 miles) if fired on a standard trajectory.

A big cause for concern has been the North's development of hypersonic glide vehicles (HGVs), an advanced weapons system being developed by major militaries around the world.

HGVs involve a projectile launched on a rocket booster with a velocity at least five times the speed of sound, featuring increased maneuverability that can evade detection and interception.

While most ballistic missiles can already fly at hypersonic speeds, analysts have said the HGV's ability to fly at low altitudes and maneuver in-flight make them a greater threat.

According to Jeffrey Lewis, an arms expert at the Middlebury Institute of International Studies in the US, the type of HGV launched by the North in January looks to be a type of conical hypersonic glider, also known as a "maneuvering reentry vehicle (MaRV)."

The weapons system tested then flew a total 700 kilometers (435 miles), including a lateral maneuver that took it some 120 kilometers.

However, MaRV is not a novel type of weapon, and North Korea has tested similar vehicles before on less-powerful boosters, such as the 2017 launch of a MaRV on a short-range Scud missile.

The missile fired in January appears to have first been shown off at the "Self-Defense-2021" expo in Pyongyang in October 2021, according to Ankit Panda, a senior fellow with the nuclear policy program at the Carnegie Endowment for International Peace.

"The weapon tested by North Korea is probably most usefully described as a ballistic missile equipped with a maneuverable reentry vehicle," Panda told DW. "This missile would indeed reach hypersonic speeds, which are described as speeds in excess of five times the speed of sound."

In late September, North Korea surprised the world by announcing for the first time that it had tested an HGV. State media said the missile system was called Hwasong-8, Hwasong being the name North Korea gives to a series of missiles that translates to Mars in English.

According to a photograph of the September launch analyzed by 38 North, a Washington-based think tank that monitors North Korea, an "arrowhead-shaped vehicle with stubby wings resembling a hypersonic glide vehicle" was atop an intermediate-range ballistic missile (IRBM), a booster resembling a shortened version of a Hwasong-12 ballistic missile.

A new arms race on the Korean Peninsula?

However, according to 38 North, an HGV would only make a niche contribution to the North's existing large ballistic missile force, "primarily in providing another option to evade missile defense."

It is also difficult to verify North Korea's claims of successful launches, without direct data on where projectiles may have flown or if they reached their intended targets.

Following North Korea's first hypersonic test, it claimed to have test-fired an SLBM in October.

"The missile itself is something we haven't seen before. It is smaller than the sub-launched missiles that Pyongyang displayed in recent military parades and appears to more closely resemble the land-based KN-23 missile," said Williams.

Known as a short-range ballistic missile (SRBM), the KN-23 has a range of 450 kilometers, which means a submarine would theoretically need to move relatively close to targets in order to be effective. This would make the subs more vulnerable to advanced detection systems. 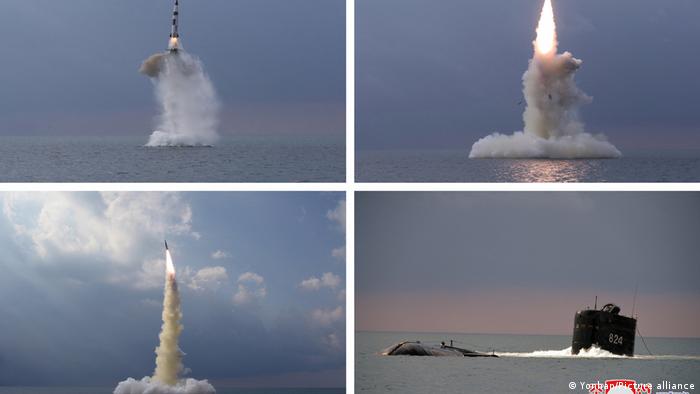 The last time North Korea claimed it had launched an SLBM, it was a larger Pukguksong (Polaris) missile with nearly three times the range of the KN-23.

According to 38 North, the "new type" of SLBM fired in October had more to do with political messaging to South Korea than a display of increased strategic capability. Seoul had launched a very similar SLBM in September.

What other types of missiles does North Korea use?

Pyongyang's capabilities include the Hwasong-14, an intercontinental ballistic missile (ICBM) which was tested in 2017. It has a range of more than 10,000 kilometers — making any part of the United States a potential target.

However, to strike targets in South Korea or Japan, which are home to the largest overseas contingent of US military personnel, smaller missiles with a shorter range are enough to present a major threat.

"Other developments included launches of missiles we had seen before 2021, but fired from new kinds of platforms. Most notably, the launch of a KN-23 ballistic missile from a rail car," said Williams. 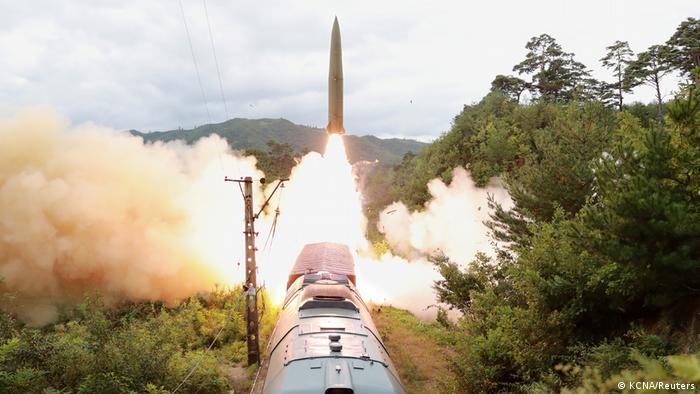 North Korea tested a missile launched from a train in September

In September, the North also fired a long-range cruise missile, claimed to be a "strategic weapon of great significance."

North Korea has also tested a satellite launch vehicle called Taepodong-2, which can carry a 1,000 kilogram payload up to 10,000 kilometers, including vehicles capable of reentering the atmosphere.

Pyongyang has also developed nuclear weapons, and analysts carefully watch satellite images of its Yongbyon nuclear research center for signs that the program could be advancing. The North has carried out six tests of nuclear weapons, the last in 2017. 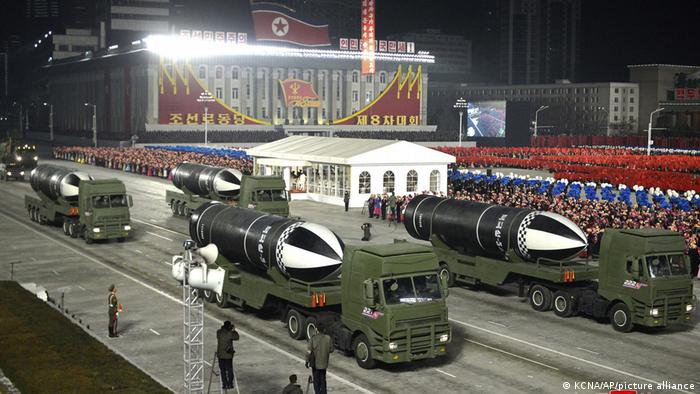 Nevertheless, the Kim Jong Un-led regime in Pyongyang has pushed ahead with weapons tests, arguing it has a right to self-defense and that diplomacy with its adversaries can only be conducted from a position of military strength.

"I don't think there’s a particular message here. The North Koreans are continuing to carry out the work that Kim set out at the 8th Party Congress last January. This is more about the improvement of North Korea's capabilities than about telling something particular to the United States or South Korea," Panda said.

The United States and its allies, Japan and South Korea, have condemned North Korea's missile tests as a threat to regional stability. Negotiations between the US and North Korea on curbing weapons development in exchange for sanctions relief fell flat in 2019.

"Given the hardships North Korea is facing at the moment, there are likely calculations about what kinds of weapons testing can be done without galvanizing the international community against it," said Jenny Town of 38 North.

Town added that, unlike in 2017, the North is now more likely to tread lightly with its weapons testing.

"Pyongyang seemed to be willing to sacrifice its foreign relations at that time to achieve a certain level of success, but these days, with a real focus on economic development as part of its national strategy and an urgent need to forge a path to economic recovery in the near term, some level of foreign relations and support is necessary," she said.

This is an updated version of a previous article published on January 9.