The military in South Korea has said the projectile was a submarine-launched ballistic missile. It comes as intelligence chiefs from the US, South Korea and Japan meet in Seoul. 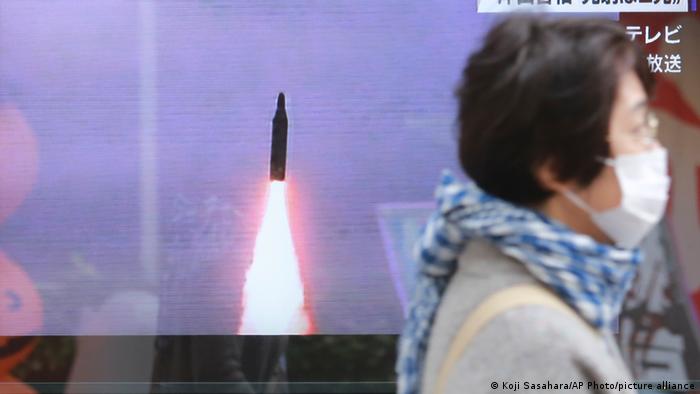 Both South Korea and Japan said that at least one ballistic missile was launched — the latest in a series of weapons tests in recent weeks.

"Our military detected one unidentified short-range ballistic missile presumed to be an SLBM fired by North Korea," Seoul's Joint Chiefs of Staff said in a statement.

The South Korean military was "closely monitoring the situation and maintaining readiness posture in close cooperation with the United States, to prepare for possible additional launches."

The prime minister, who is going into a general election later this month, was pulled off the campaign trail to deal with the situation.

"I will drastically strengthen our defense capabilities. The Kishida administration is determined to protect our land, territorial sea and air space as well as the people's lives and assets no matter what," Kishida declared upon returning to Tokyo.

The US Indo-Pacific Command described the move as "destabilizing" but said it did not pose an immediate threat to the United States or its allies.

"While we have assessed that this event does not pose an immediate threat to US personnel, territory, or that of our allies, we will continue to monitor the situation," it said in a statement.

Local news sources reported that Japanese Defense Minister Nobuo Kishi said that he also believes that a ballistic missile involved an irregular orbit, indicating that it could have been launched from a submarine.

How significant is the latest missile test?

South Korean officials said the ballistic missile was launched from Sinpo, a major naval shipyard, where the North keeps submarines, and equipment for testing SLBMs, according to satellite photographs.

It was not immediately clear whether the missile was launched from a submarine or a submerged platform, as was done in previous tests.

The launch was the latest in a string of tests, which have included a long-range cruise missile, a train-launched weapon, and what the North said was a hypersonic warhead.

A regional arms race is underway, with the South last month testing its first SLBM, becoming one of the few nations in the world to have demonstrated proven technology.

The weapons test comes as Avril Haines, the US director of national intelligence, arrived in Seoul for a three-way meeting with her South Korean and Japanese counterparts on Tuesday.

The intelligence chiefs were scheduled to discuss the standoff with North Korea, among other issues, according to reports.

The move also came after the US special representative on North Korea, Sung Kim, reiterated Washington's willingness for talks.

"We harbor no hostile intent toward (North Korea) and we are hopeful to meeting with them without conditions," he said following talks with his South Korean counterpart in Washington.

Five people who managed to escape from North Korea are seeking damages from Kim Jong Un in a Japanese court. The plaintiffs were all part of a repatriation program that they describe as "state kidnapping."

As Germany marks 31 years since reunification, North and South Korea are still at loggerheads over the question of reuniting their peninsula and how the cost of rebuilding the North will be borne.