The remains of several bodies have been found after days of rioting. Prime Minister Manasseh Sogavare has said protesters were being misled by foreign powers. 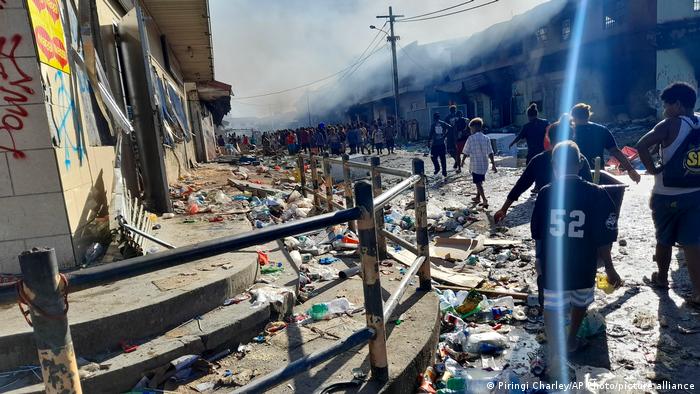 Violent anti-government protests have ravaged the streets of the capital, Honiara

The charred remains of three bodies were found in a burned-out building following days of rioting in the capital of the Solomon Islands, Australian media reported on Saturday.

Forensic teams were investigating the scene — a store in the capital's Chinatown district where many buildings had been looted and ransacked.

The government had earlier imposed a curfew — over 100 people were arrested for rioting and looting, the Royal Solomon Islands Police Force said on Saturday.

Unrest in the capital, Honiara, had calmed down by Saturday morning, with some businesses beginning to reopen, the AFP news agency reported.

Foreign interference, he said, was in response to his government's decision to switch recognition from Taiwan to Beijing in 2019.

Critics have said there are other factors involved, including pandemic-fueled economic frustrations, lack of government services and accountability, corruption and Chinese businesses giving jobs to foreigners instead of locals.

At the heart of the tensions is a long-running rivalry between residents of the country's most populous island, Malaita, and the central government based on the island of Guadalcanal. 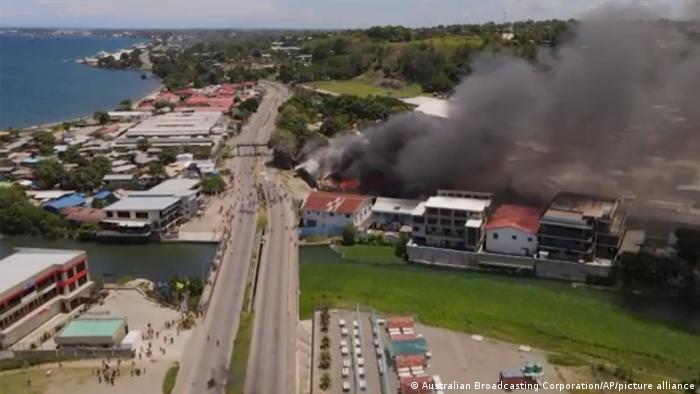 The country has seen three days of protests, arson and looting

The prime minister insisted that his government's decision to embrace Beijing was the "only issue" in the violence which was "unfortunately influenced and encouraged by other powers."

"I feel sorry for my people in Malaita because they are fed with false and deliberate lies about the switch," Sogavare told the Australian Broadcasting Corporation.

"These very countries that are now influencing Malaita are the countries that don't want ties with the People's Republic of China, and they are discouraging the Solomon Islands to enter into diplomatic relations and to comply with international law and the United Nations resolution."

Sogavare announced a 36-hour lockdown on Wednesday after about 1,000 people stormed the parliament, demanding his resignation. But demonstrators swarmed the streets of the capital in defiance halfway into the lockdown.

A night curfew was reimposed indefinitely on Friday after Australian police began taking control of the capital's hot spots.

The government requested help from Australia under a bilateral security treaty that has existed since 2017. 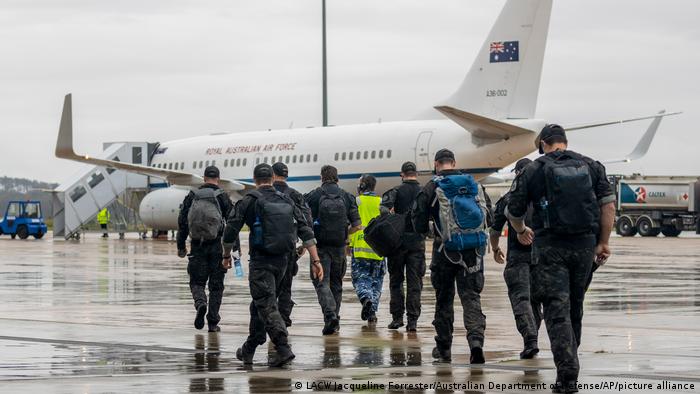 Australia has sent peacekeepers to the area to quell riots

Nearby Papua New Guinea also sent 50 police officers. "We are aiming to help restore calm and allow normal constitutional processes to operate," the Papuan and Australian foreign ministers said in a joint statement on Saturday.

"The Solomon Islands reached out to us first ... as family because they trust us and we've worked hard for that trust in the Pacific," Morrison said.

"That is our region and we're standing up to secure our region with our partners, our friends, our family, and allies," he added.

Notably, Australia would not assist in the protection of the National Parliament and the executive buildings, in a sign that it was not taking political sides.

Morrison questioned whether Chinese businesses were being targeted, calling the unrest "a bit of a mixed story."