Solomon Islands says the decision to switch diplomatic recognition from Taiwan to China was based on "national needs." The development leaves Taiwan more isolated than ever. 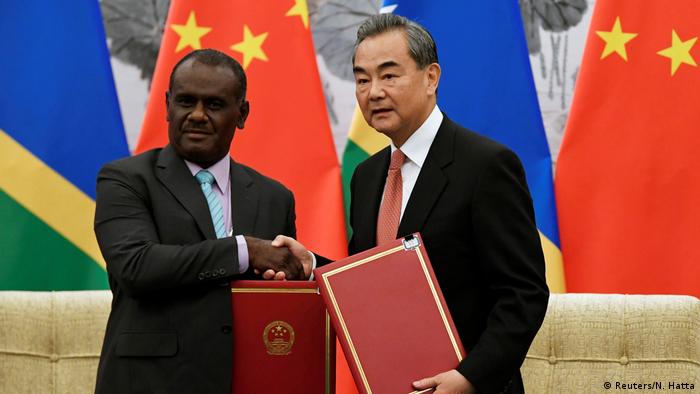 China and the Solomon Islands formed diplomatic relations on Saturday, days after the Pacific island nation severed ties with Taiwan.

"We look forward to the quick development of bilateral relations between China and the Solomons," Chinese Foreign Minister Wang Yi said at a ceremony in Beijing, alongside his Solomon Islands counterpart, Jeremiah Manele.

"We welcome this decision by the Solomon Islands and support the country to move forward in the development path it has chosen for itself," said Wang.

Solomon Islands' foreign minister said his country's decision to switch diplomatic recognition to China — its largest trading partner — was based on "national needs."

"The development challenges for our country are huge. We need a broader partnership with countries that also includes China," he said.

Taiwan more isolated than ever

Solomon Islands was the sixth country to switch allegiance to China since President Tsai Ing-wen took office in Taiwan in 2016.

The switch is a major coup for Beijing just weeks before it celebrates the 70th anniversary of the founding of the People's Republic of China.

And it leaves Taiwan more isolated than ever, with just 15 states left that recognize it.

Read more:  Are Hong Kong protests a warning for Taiwan?

Taiwan and China split in 1949 after the Communist Party won a civil war on the mainland. They have extensive commercial ties, but no official relations.

China still views the island as its territory and has vowed to seize it — by force, if necessary.

As China's economic and military power has grown in recent decades, most countries —  including the United States — have switched diplomatic recognition to Beijing.

Only a handful of nations still recognize Taiwan, largely in Latin America and the Pacific. Kiribati, another Pacific island nation, announced it was switching diplomatic recognition to China on Friday.

The Solomon Islands had conducted a weekslong review of its policy toward China, which was offering $8.5 million (€7.7 million) in development funds to replace support from Taiwan.

After signing diplomatic ties with the Solomon Islands, the Chinese foreign minister also issued a warning for Taiwan, where President Tsai is gearing up for reelection in January.

"China must and will be reunified. Factually and legally, Taiwan island has been and will always remain an inalienable part of China's territory. This status will not change, and is impossible to change," Wang said.

Despite Chinese protest, Hawaii remained on the itinerary for Tsai Ing-wen”s tour of the Pacific. Experts say the leader’s trip is part of Taiwan’s "defensive" strategy, and aims to counter growing pressure from Beijing. (28.03.2019)