Slovakia: Fico will ′still pull strings′ as protests intensify | Europe | News and current affairs from around the continent | DW | 16.03.2018

The Slovak prime minister has resigned amid a political crisis triggered by the murder of a journalist. Protests have swept the country, and researcher Milan Nic told DW there is little sign they will subside. 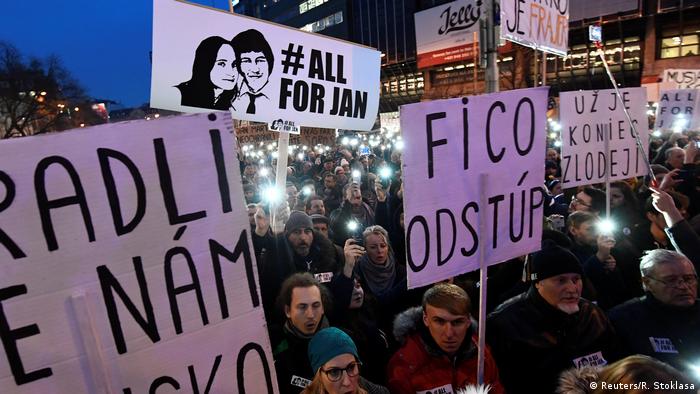 DW: Many observers feel the resignation of Slovak Prime Minister Robert Fico was a preemptive move, designed to ensure he stays in politics. Fico himself said he will remain an active politician and president of his SMER Social Democracy party. What is your take?

Milan Nic: I agree with the view that Fico left in order to stay. His resignation is a shrewd political move driven by his desire to retain power. In Peter Pellegrini, he has a puppet prime minister but stays chairman of the ruling party. He will pull the strings from behind and he will be still the strongest power broker in the country. His business model of governing will stay in place. A similar thing happened at the Interior Ministry. Robert Kalinak resigned, but will be replaced by someone who will obey his commands. All in all it is about the model of a captured state which relies on Robert Fico as the main the political manager.

Captured state is a quite strong notion.

It is fair to say that there is a captured state in Slovakia as far as law enforcement is concerned. Police investigators, the prosecutor's office and parts of the judiciary are definitely not independent, but politically-controlled.

You said that Peter Pellegrini will be a puppet prime minister. In his capacity as minister for investment and IT, he is to a certain extent responsible for the misuse of public and EU money, but he personally was not involved in any corruption scandals. Is there any chance he will act independently?

I am skeptical. Pellegrini secured top political positions thanks to his business connections within Fico´s SMER party. It's true he was always decent, but does not have his own power base. I think Robert Fico can be sure that Pellegrini will follow his advice.

Ten days ago, Slovak President Andrej Kiska said the country needed snap elections or at least a completely restructured government. This won't happen after Kiska accepted the conditions Fico made when he announced his resignation. Did Kiska not have other options?

Kiska did what he had to. When the parliamentary majority puts together a solution there is nothing much he can do. He acted in line with the Constitution. He will remain an important figure. The big question is whether he will run for president again next year or not. Originally, everyone expected him not to continue due to personal reasons. But the murder of [investigative journalist] Jan Kuciak changed everything. If he doesn´t run for president next year then the field is wide open and it's not clear where the country is heading and how strong the extremists will be.

On the other hand, the current protests for more democracy and good governance are the biggest since Slovakia was founded in 1993. Does that not offer hope?

This is the positive side of the whole affair. Nothing similar happened in Malta when blogger and journalist Daphne Caruana was murdered last autumn. In Slovakia a visible and very sizeable part of society supports Europe, modernization, more transparency, a decent state in which corruption is tackled and a more open country. They are demanding; they are impatient; they are politically quite mature and mobilized at a time when we have divided societies across Europe. But they are waiting for their Macron. The worst thing that could happen is a lack of a forward-looking political solution, rising frustration. A more systematic assistance and small intervention from Europe could help.

What kind of intervention?

It's very good that the European Parliament sent a delegation to Slovakia. They wrote a good report, had a debate about it in the plenary session, but the question is how they will follow it up. For instance, will they initiate renewal of annual reports on corruption in member states by the Commission? This is not only about Slovakia, but about the ability of European institutions to adapt to new realities in societies where there is much distrust towards political institutions.

So what exactly could European institutions do now for Slovakia?

Let's just take the murder case of Kuciak. This could be a starting point for Europol and the European prosecutor's office setting up joint investigation with Slovak authorities. The new EU budget could have special program to support investigative journalists and civil society organizations working on anti-corruption or rule of law issues.

Isn't the situation in Slovakia after the murder case also about a transition which, in many respects, went wrong for millions of people while a small elite managed to get rich and keep its power?

Yes, in a way. Ironically, Fico's SMER party is a coalition of various constituencies. It is a populist center-left party which nominally represents the losers of transition, is also the backbone of corruption and the platform of the richest people and the oligarchs in Slovakia who want to make sure that the money of public investments goes to their pockets. But now many people are very dissatisfied with this situation and I'm not sure whether Fico's party can really survive this in a long-run.

Where do you think will Slovakia is headed?

There is more than meets the eye in Slovakia right now. On the one side there is this optimistic civic movement. The risk is, it could go terribly wrong like everywhere in Europe. Traditional parties lose ground, extremism grows. Especially if the political system cannot produce solutions. I am afraid that the only real option left for Robert Fico and his SMER party is to radicalize. But it is still open-ended, and very hard to say what politics will look like in 2020.

Milan Nic is a senior fellow in the Robert Bosch Center for Central and Eastern Europe, Russia, and Central Asia at the German Council of Foreign Relations (DGAP). He previously headed the Europe program at the GLOBSEC Policy Institute in Bratislava, Slovakia.