The Visegrad Four have been at odds with the EU over the bloc's values. But Slovakia and the Czech Republic are more moderate than Hungary and Poland and could help calm the waters. Tim Gosling reports from Prague. 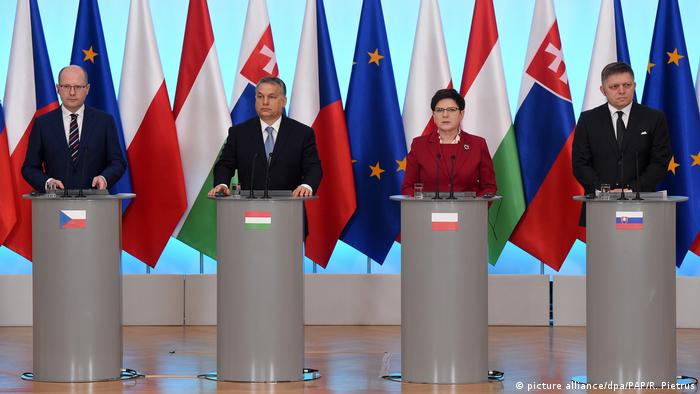 Hungary and Poland have dominated headlines over the past 12 months as a series of confrontations with Brussels over the rule of law and sliding democratic standards shakes the EU. Faced with few options, the EU is now eyeing Slovakia as a peacemaker.

The tension with Hungary and Poland has ramped up since the EU rediscovered its confidence in the wake of the French election and has sought to push back against the Central European "illiberal axis," which appears to reject the EU's founding values.

But the Czech Republic and Slovakia, who along with Hungary and Poland form the Visegrad Four (V4), have long sought to keep their distance from their neighbors' populist and nationalist challenge to EU values. 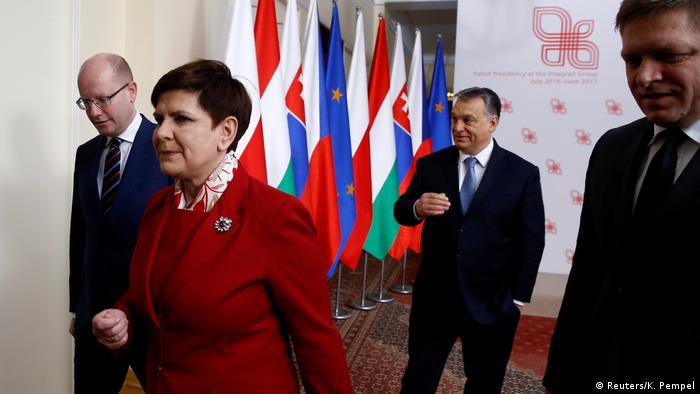 Poland and Hungary have been at odds with the EU

The group, which was formed by the four Central European states in 1991 to promote their European integration as they emerged from decades of communist rule, has long been split on most major issues.

During the building fight with the EU over Poland's controversial measures to reform its judicial system, Warsaw received little support from the Czechs or Slovaks.

"Visegrad's national interests at the EU level rarely overlap," says Milan Nič, a senior fellow at the German Council on Foreign Relations and former adviser to Slovakia's deputy foreign minister. The four have "very different expectations of the next phase of EU integration."

The V4 talks therefore focus on points of consensus, notes Aleš Chmelař, Czech state secretary for European affairs. "We have no reason to discuss, for instance, the Polish rule of law probe. The V4 do not defend all that happens in each state."

The divergence has not escaped the attention of EU leaders trying to stabilize the bloc as they prepare to deepen integration following September's German federal elections. Brussels has identified Slovakia and its prime minister, Robert Fico, as a key player.

"The east-west divide has gone too far," says Nič. "Fico is now being cultivated by the EU as a go-between with Visegrad."

Although the Czech Republic has spent recent years seeking the role of the EU's Visegrad mainstay, elections due in October have seen that policy suspended in favor of populist preening.

Into the void steps Robert Fico. Although not shy of toeing the populist line when it suits him, he is the only current candidate for the job. His Europe-friendly credentials include leading Slovakia into the eurozone in 2009 as well as Bratislava's strong performance in the rotating EU presidency last year, when Brexit and the new US administration caused ructions in the bloc.

Hints of a plan to procure Slovakia as a middleman came in June, as the European Commission announced infringement procedures against the other three Visegrad states for rejecting migrant quotas. While Fico led a furious fight against immigration in the run-up to elections in March 2016, his rhetoric has cooled since his Smer party lost its majority, with many voters turning to the far right.

Some EU sources claim Bratislava escaped censure because Slovakia has accepted 16 refugees - one over what the source, who didn't want to be named, called the "unofficial threshold." However, more convincing is speculation from the Slovak opposition, as well as in Brussels, of a backroom deal.

"Most of the Slovak rhetoric surrounding the refugee crisis is primarily intended for domestic political purposes," Blanka Kolenikova at political risk consultancy IHS Markit points out.

In July, the Slovak prime minister appeared alongside Jean-Claude Juncker, ostensibly to discuss claims that international chains and brands sell inferior versions of certain food items in the east of the bloc.

The president of the European Commission beamed as he signaled support on a topic symbolic of the disappointment in V4 countries over slow progress in matching their quality of life to that in Western Europe. His words can also be read as a wider message to Fico.

"I don't like the idea that there would be some kind of second category in Europe," said Juncker. "We want to have Slovakia on our side." 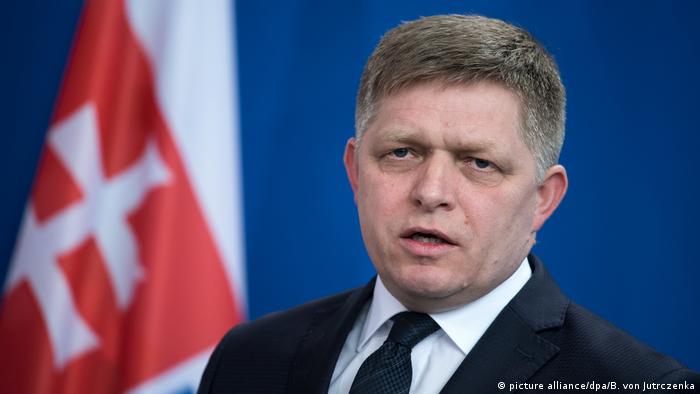 Robert Fico smells an opportunity to raise his profile in Europe

Meanwhile, the Slovak leader is desperate to avoid being sidelined in the coming phase of integration. "We shouldn't miss out on being at the core," Fico told parliament in June. "We realize that we'll be expected to take tangible measures and decisions."

In return for playing a constructive role in Visegrad then, Slovakia will get the opportunity to push national interests.

"The V4 region has long tried to increase its say in the EU and complained of perceived inequality," Kolenikova notes. "Slovakia may see this as an opportunity to raise its profile."

Nič suggests the Slovak premier is also looking to his own legacy. He will not have missed the elevation of former Polish Prime Minister Donald Tusk to president of the European Council. "The deal for Fico to become the V4 point man wasn't in the Slovak plan, but we'll see how he takes to the role," he adds.

By mid-August, Fico offered an answer, making concrete his agreement as he battled a crisis in Slovakia's governing coalition. "I am very much interested in regional cooperation within the Visegrad Four but Slovakia's vital interest is the EU," he stated.

Fico must move swiftly to secure what leverage he can as Brussels may once again have a choice of Visegrad dance partners next year.

Driven by populist machinations ahead of the October elections, Prague essentially barged its way into the infringement procedures launched in June, announcing loudly as Juncker visited the same month that it would take no more refugees under the scheme than the 12 it has admitted. However, it would be little surprise to see a return to more constructive policy following the vote.

"We don't welcome it should one country become a symbol for all the V4," says the Czech Republic's Chmelař. "Regarding migrant quotas, we have a different context to the others. It is normal that no big decisions are taken just ahead of elections."

The financial and geo-political risks attached to nuclear power are rising, but Central Europe's belief is unshakable. Tim Gosling reports from Prague. (02.05.2017)