The German Confederation of Skilled Crafts has warned that a worsening shortage of labor is threatening to curb growth for businesses. DW looks at the booming sector, which is seen as key to Europe's largest economy. 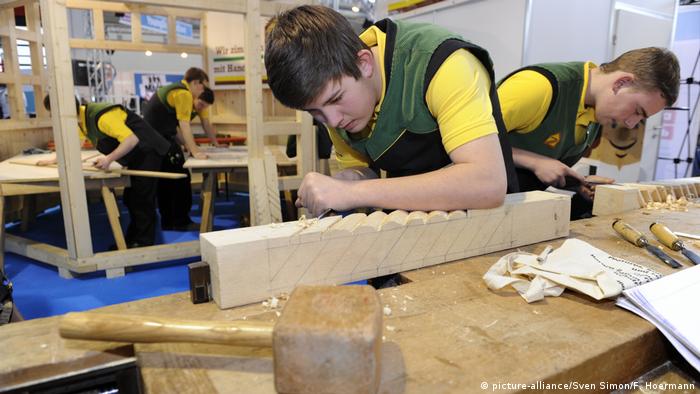 The skilled craftworker's services are called on millions of times daily in Germany. In a long and successful tradition the German skilled crafts sector has developed a strong position in the country's economic and social life.

Around a million companies are listed in the official register of handicrafts and the registry of companies involved in the skilled craft sector. This includes 5.45 million people and 360,000 apprentices who are completing their training.

This means 12.5 percent of all employed Germans and over a quarter of all apprentices in Germany work in manual labor related companies. In 2016, the total revenue of those businesses reached €561 billion. 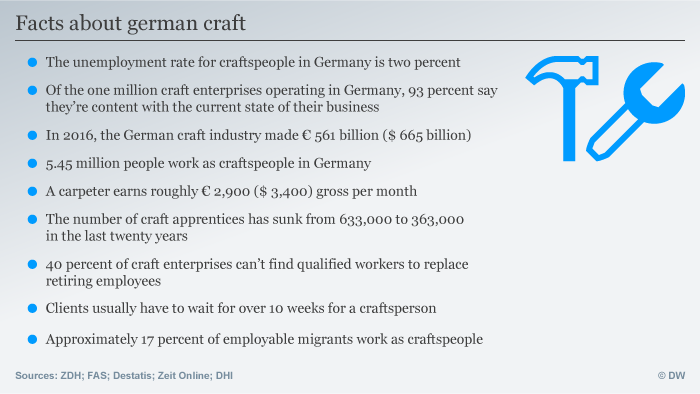 The skilled crafts sector in Germany includes over 130 occupations in virtually all sectors of the economy. Small wonder that it's responsible for the most places of vocational training.

Its dual training system is unique in the world as it aims to combine practical work and learning in the enterprise with theoretical education in a vocational school during training.

After three, or sometimes three-and-a-half, years of training, apprentices need to pass the skilled worker's examination.

Everyone who's obtained the certificate however can acquire further qualifications or even sit the master craftsman's examination. This is the top specialist crafts qualification and authorizes the person to manage an enterprise and to train apprentices.

In a number of German federal states, the master craftsman's qualification opens the door to studies in a polytechnic or university.

The Secret of German Quality

The Secret of German Quality

An increasing number of skilled crafts enterprises export their products or provide services abroad. Over 50,000 enterprises from among the German skilled crafts sector sell their products and services abroad, with the European Union being their main market. Germany's Chamber of Commerce and other trade groups thereby provide valuable expertise for business expansion beyond Germany's borders.

Moreover, the German Confederation of Skilled Crafts is involved in many international partnerships and development projects. The focus of these efforts is on helping businesses to explore and build markets in the emerging economies of the developing world.

As a result, Germany's manual labor sector has been able to double its exports in the last 15 years. About 60 percent of those are generated by products in the fields of mechanical engineering, electrical engineering as well as medical devices.

At home in Germany, the sectors booming activity however also has its downsides. The recent upsurge in construction, thanks to ultra-low interest rates, has brought most crafts businesses to the limits of their capacities. This means that Germans often have to wait for an average three months to get an appointment with a skilled laborer.

Did you know that brush making has historically been a trade for the blind? At Hagen's outdoor museum, visitors can go back in time, forge hammers on anvils, eat tradtiionally baked bread and learn about German history. (23.08.2016)