Taiwan has legalized same-sex marriage. Mainland China is not likely to do the same, says DW's Frank Sieren. But homophobia or prudishness are not the reasons why. 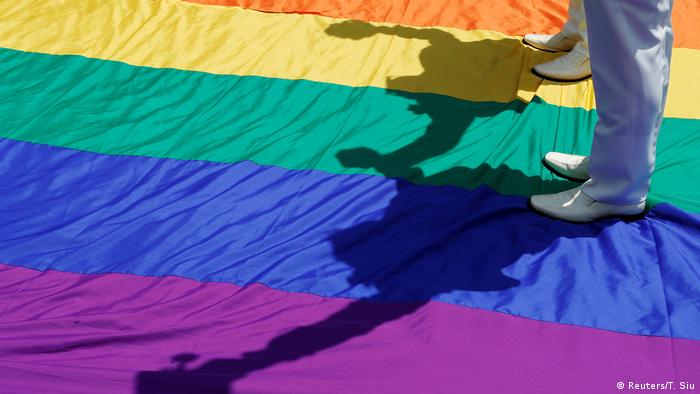 Rainbow flags are flying all over Taiwan, as the first Asian territory to legalize same-sex marriage. Homosexual and heterosexual unions are now on an equal legal footing when it comes to taxes, insurance matters and custody. The first ceremonies took place last week in the capital Taipei, accompanied by a frenzy of flashing cameras.

The move was controversial. Conservative and religious groups tried to sabotage the reform over and over again. And in November 2018, seven million voters rejected gay marriage in a non-binding referendum.

But the legislation that was eventually passed with the support of the president and her party confirms Taiwan's status as Asia's most LGBT-friendly state. Taiwan's Christopher Street Day Parade is the biggest of its kind in Asia.

Only heterosexuality is 'normal' in China

The situation is very different on mainland China, where homosexuality was only legalized in 1997 and removed from the official list of mental illnesses in 2001. Though there are gay dating apps in China, as well as bars, clubs, film festivals and law firms for the LGBT+ community in big cities, homosexuality is not accepted in mainstream society.

For many heterosexuals, homosexuals are considered to be "abnormal" or going through a "phase." There is advice for healing homosexuality in medical textbooks, with methods ranging from heterosexual marriage to highly controversial and harmful conversion or electroshock therapy. According to a United Nations study, only 5% of the LGBT+ community chooses to disclose their sexual orientation. However, this has less to do with the repressive state than with social and family pressure.

Most parents and grandparents think it is their children and grandchildren's duty to continue the family line. The one-child policy raised expectations even further.

There is also some discrimination against homosexuals because of a general fear of AIDS and lack of awareness.

Furthermore, although the law no longer criminalizes gay sex, it does not protect the LGBT+ community from discrimination.

Many people get married to hide the fact that they are gay from their parents.

Since President Xi Jinping took office, the general message has been that homosexuality is not desirable. In 2016, a court ruled against same-sex marriage after a gay couple filed a lawsuit when their marriage application was rejected.

The same year, without explanation, a new regulation came into effect banning the depiction of "abnormal sexual relationships" on the radio, on television, in films and on the internet.

Rape, incest and homosexuality were all lumped in together.

Talk shows and web series that explore LGBT+ themes were banned. The latest prominent victim of the censorship was the Oscar-winning film "Bohemian Rhapsody" about Freddie Mercury, the lead singer of the band Queen. In China, the film was three minutes shorter than the original version. And somewhat more confusing. Not only were explicit homoerotic scenes cut but dialogues referring to Mercury's feelings for men were too.

On the other hand, the fact that the film was shown at all in China — only about 30 foreign productions are screened per year — was seen by some as progress. But for Popo Fan, a Chinese LGBT+ filmmaker and activist who lives in Berlin, it was a failed attempt to show that China is cosmopolitan.

Marriage to keep the social balance

It is not because of prudishness or homophobia, like in Russia today or in China during the Cultural Revolution, that the government disapproves of such content. It propagates traditional family structures as part of the Core Socialist Values supposed to guarantee the state's stability.

China's population is aging. Despite the lifting of the one-child policy, the birthrate is dropping. At the same time, there is still no comprehensive scheme for taking care of seniors. Children and grandchildren are therefore partly responsible for social balance.

On top of this, the government fears all forms of criticism which could put its power into question especially if there is an impression that civil society groups are basing their work on that of foreign models. Even though LGBT+ activists are not arrested as a rule and have the right to assemble, there have been more incidents of discrimination in recent years.

There doesn't seem to be much concern on the part of the government that the developments in Taiwan will have a major impact on the mainland. An Fengshan, spokesman for China's policy-making Taiwan Affairs Office, said that they had "noted reports on the island" about same-sex marriage. But he added that "the mainland has a marriage system of one man, one woman."

Since Beijing sees Taiwan as a renegade province and seeks reunification on its own terms, the message is clear: This form of equal opportunities will only be temporary.

On the other hand, it might have to give in to pressure from Chinese society one day.

DW‘s Frank Sieren has been living in Beijing for over 20 years.