Lawmakers in Taiwan on Friday voted 66-27 in favor of a law permitting "exclusive permanent unions" for same-sex couples and to allow them to apply for a "marriage registration" with government agencies.

Taiwan is the first country in Asia to legalize same-sex marriage.

Friday is the International Day against Homophobia, Transphobia and Biphobia,  The voting was accompanied by the presence of hundreds of gay rights supporters near the parliament, who hugged one another enthusiastically in the rain when the approval was announced. 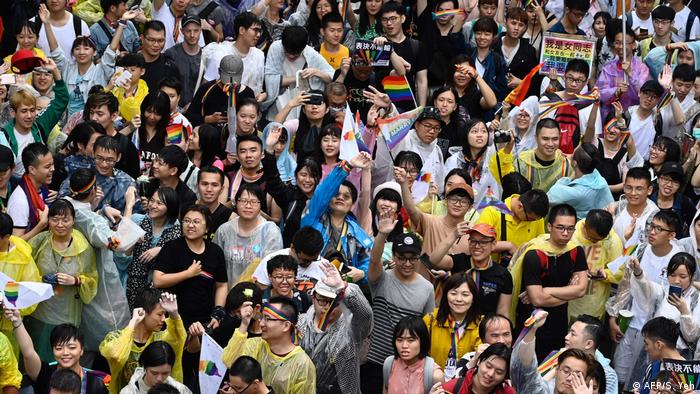 Gay rights supporters gathered outside the parliament despite persistent rain

President Tsai Ing-wen hailed the vote in a tweet in which she called the decision a "big step towards true equality."

DW's William Yang in Taipeh said people celebrating outside parliament were "thrilled, hugging each other and waving rainbow flags ... but vowed to continue the fight until same-sex couples enjoy full legal rights."

Conservative groups said the approval did not reflect the will of the people.

"The will of some 7 million people in the referendum has been trampled," one group, the Coalition for the Happiness of
Our Next Generation said in a statement. "The massive public will strike back in 2020."

How did we get here? The gay rights movement started gathering momentum in Taiwan in the 1990s. The country's top court ruled in 2017 that preventing same-sex couples from getting married was unconstitutional. It gave the government two years to introduce appropriate legislation or see a marriage equality law enacted automatically. That deadline was due to un out on May 24.

When does the law take effect? President Tsai Ing-wen's ruling Democratic Progressive Party (DPP) holds the majority in parliament, occupying 68 out of 113 seats. All that remains now is for her to pass the bill into law.