Taiwan referendum threatens both LGBT rights and Olympic athletes | Asia | An in-depth look at news from across the continent | DW | 23.11.2018

A key referendum in Taiwan has the potential to roll back same sex-marriage and jeopardize international athletic competition. Conservatives and pro-independence groups are using referendums to push their agenda. 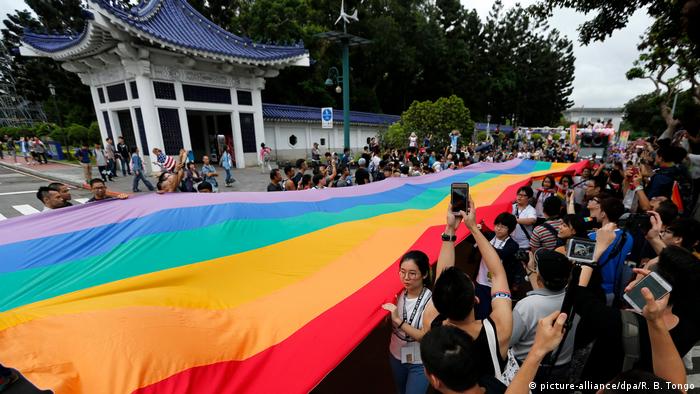 As Taiwanese voters head to the polls to elect city mayors and city and village leaders on Saturday, they will also be voting on 10 referendums that could set the tone for key social issues including marriage equality and changing the country's name for the Olympics.

An amendment to Taiwan's Referendum Act last year lowered the threshold for passing a referendum as well as decreased the voting age from 20 to 18.

According to the act, for a referendum to be legally binding in Taiwan, at least 25 percent of voters need to vote in favor of a question. Political observers note that by using referendums, interest groups can bypass major political parties to push through their preferred policy agenda.

Austin Wang, a Taiwan expert at the University of Nevada, Las Vegas, said that Taiwan's Democratic Progressive Party (DPP) could be "seriously damaged" by the referendums if policies are pushed through that oppose the DPP platform.

Marriage equality has been a polarizing issue in Taiwan since it was legalized in May 2017. Anti-marriage equality groups led by religious conservatives proposed two referendums to challenge the constitutional court ruling, which mandated a two-year timeframe for the government to implement the same-sex marriage law.

On top of that, conservatives proposed another referendum that aims to scrap more than a decade of gender equity education in Taiwan. In response, LGBT rights groups put forward two pro-marriage equality referendums to safeguard the movement's progress.

According to Jennifer Lu from the Marriage Equality Coalition Taiwan, the referendum results could serve as a reference for the government on deciding to allow for full marriage equality or only permit civil partnerships – which are considered discriminatory by marriage equality groups.

Since public opinion about marriage equality is polarized in Taiwan, Lu thinks it will be hard to predict the government's decision if the outcome of the opposing referendums isn't conclusive.

"The most awkward scenario is if all four referendums don't receive enough votes. The constitutional court would then have to provide an even narrower constitutional interpretation to advise the government on how to handle this issue," said Lu.

Wang said that Taiwan's society is deeply influenced by Confucianism, which emphasizes the importance of having kids and there is a possibility that a majority of Taiwanese people wouldn't support the legalization of same-sex marriage.

"Since the mandate to legalize same-sex marriage was made by the Supreme Court instead of the legislature, it is likely that the decision is not supported by the majority of Taiwanese people," said Wang.

Taiwanese voters will also decide Saturday on a name-change referendum that could ramp up pro-independence sentiment in Taiwan.

The referendum asks voters to decide whether they support Taiwan competing in the 2020 Tokyo Olympics, and all other international sporting events, under the name "Taiwan" instead of "Chinese Taipei."

The referendum has been widely opposed by athletes, the International Olympic Committee (IOC) and Taiwan's Olympic Committee. The IOC has sent three letters to warn that Taiwan could be expelled from IOC, potentially jeopardizing its ability to join the Olympics.

However, the referendum's organizers guaranteed that the result wouldn't affect Taiwanese athletes' right to compete in international sporting events.

Local media, United Daily News reported that Taiwan's President Tsai Ing-wen told the IOC that her government has no intention to compete in Olympics under the name of "Taiwan."

Wang points out that the name-change referendum is an important way for pro-independence groups in Taiwan to gauge the amount of voters that support Taiwan independence.

A test for Taiwan?

Despite the opposition from multiple groups and organizations, Wang thinks that the name-change referendum has the highest likelihood to become legally binding.

"I think the referendum will not only get support from pro-independence supporters, but it could also rally support from undecided voters," Wang said.

While the government remains ambiguous about its response to the referendum in case it passes, scholars believe that Beijing is likely to put pressure on the IOC and try to remove Taiwan from the Olympics.

Dafydd Fell, director of SOAS Center of Taiwan Studies in London, told DW that he thinks Tsai Ing-wen should remain cautious about the government's stance on the name-change referendum.

"I imagine that the PRC [People's Republic of China] would love the excuse to punish Taiwan and remove them from the Olympics," said Fell.

Regardless of the referendum results, Fell thinks that this election provides an opportunity for the world to see how Taiwan handles the challenges that come with referendums, which in turn will reflect the sophistication of Taiwanese voters as well as how political mobilization is triggered in Taiwan.

"Whether Taiwan can handle the challenges of this kind of direct democracy will not only tell us something about the sophistication of its voters but also political mobilization," Fell said.