The first large-scale pro-independence rally in a generation has brought thousands of people onto the streets of Taipei. China has recently strengthened its determination to bring the self-ruled island under its control. 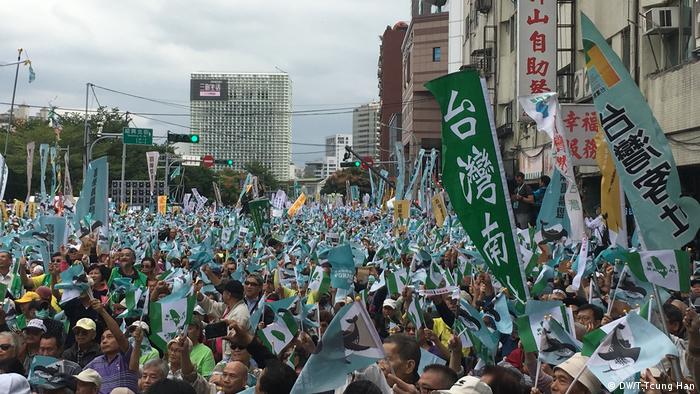 Several thousand pro-independence activists have rallied in Taiwan's capital, Taipei, to push the Taiwanese government to hold a referendum on whether to declare independence from China.

Organizers claimed more than 100,000 people turned out for the march against Beijing's increasing hostility toward the self-ruled island.

Some carried placards bearing the message: “No more bullying; no more annexation."

The demonstration was organized by a new political outfit, the Formosa Alliance, which is backed by two pro-independence former Taiwanese presidents, Lee Teng-hui and Chen Shui-bian, as well as leaders of several other smaller political parties.

Independence activist George Kuo founded the alliance in February 2018 to pressure the government to amend the island's Referendum Act and initiate the process for organizing a public referendum on independence from China.

"In order to help Taiwan be recognized as a sovereign state internationally, our government needs to amend the Referendum Act to allow the Taiwanese people to express their desire to achieve Taiwanese independence through votes," Kuo told DW, ahead of the rally.

China sees self-ruling democratic Taiwan as part of its territory to be reunified, despite the two sides being ruled separately since the end of a civil war on the mainland in 1949. 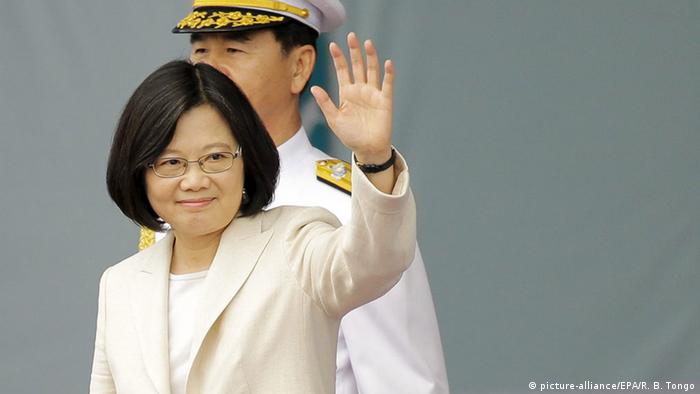 Taiwan views itself as a sovereign state, with its own currency, political and judicial systems, but has never declared formal independence from the mainland.

Beijing has warned it would respond with force if Taiwan tried an official split. China also demands its international allies forfeit diplomatic recognition of the island. Furthermore, China's growing international political and economic clout in recent years have allowed Beijing to curtail Taiwanese presence on the international stage, by blocking it from global forums and poaching its dwindling number of diplomatic partners.

Taiwan's currently ruling Democratic Progressive Party (DPP) is traditionally independence-leaning, but President Tsai Ing-wen has said she wants to maintain the status quo with China. Tsai's measured approach has alienated some pro-independence supporters of her party.

This hasn't prevented relations between Beijing and Taipei from further deteriorating since Tsai took office in 2016, as she has refused to adhere to Beijing's line that Taiwan is part of "one China."

Read more: US to sell Taiwan military gear worth $330 million

Kuo argued that the pro-independence rally gave the Taiwanese people the opportunity to come out and show to China that they disapprove of Beijing's "barbaric way of intimidating Taiwan and its people."

Chinese authorities, meanwhile, have said the Formosa Alliance should not go down what they called a "dangerous path." 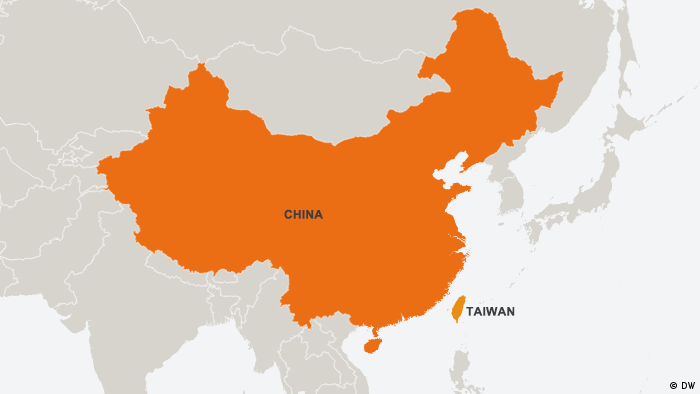 Saturday's protest took place at a sensitive time in Taiwan, ahead of local elections in November. Even though the Formosa Alliance denied that its decision to organize the demonstration was influenced by electoral considerations, some analysts believe otherwise.

Kharis Templeman, an expert on Taiwanese democracy and security at Stanford University, pointed out that Tsai and the DPP are struggling domestically, and, therefore, it's understandable that these pro-independence activists are now coming to their rescue.

"It makes sense for independence activists to hold events now to rally support for their cause, as the DPP is in danger of getting trounced in the local elections," Templeman told DW.

Read more: Is Taiwan's tourism industry too reliant on China?

A vote on independence in Taiwan would require an amendment to current laws, which bar referendums on changing the constitution or sovereign territory.

Many believe Tsai would be unlikely to allow such an amendment due to fears that it would enrage Beijing. "Acknowledgement of Taiwan's existing de facto independence is high, but because of the risks involved in pursuing de jure independence, the mainstream position in Taiwan is to support the status quo," Jonathan Sullivan, director of China programs at Nottingham University, told DW.

According to local media reports, the DPP prohibited its officials and candidates from attending Saturday's protest, which was held outside the party headquarters.

But some independence activists say this is the right time to press forward, given the DPP holds the presidency as well a parliamentary majority for the first time.

Yi-Chih Chen, the chairperson of the pro-independence Taiwan Radical Wings, argues that the key for Taiwan to achieve independence is for the government to turn the Taiwanese people's collective will into a parameter that Western allies have to take into account when dealing with China.

"President Tsai's government should tell the US that there is a consensus among the Taiwanese people that Taiwan should become independent, and it is not purely DPP's political agenda," Chen told DW.

The Chinese government has urged the US to "correct its mistake" regarding President Donald Trump's recently approved Taiwan Travel Act, which allows unrestricted two-way travel for officials from the US and Taiwan. (18.03.2018)