Should Germany exit the euro? | Business| Economy and finance news from a German perspective | DW | 24.07.2015

While the possibility of Greece's exit from the eurozone has preoccupied European policymakers in recent months, some economists say it's actually Germany that has to leave the currency union. But others disagree. 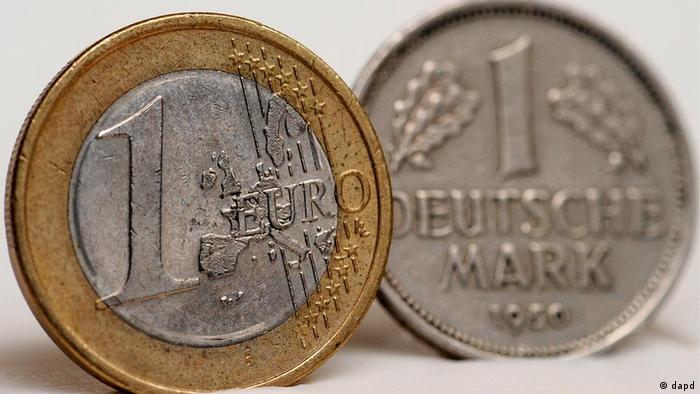 Through all the haggling and hair-pulling in the past months over more austerity, fewer creditors getting their money, and a dreaded "Grexit" - a scenario in which Greece would leave Europe's currency union - at least four prominent economists in three major American publications have casually and quietly suggested there may be a third way: A German exit.

That is, Germany should exit the euro, and clear the way for countries in the south of Europe - notably, Greece, Italy, Spain, and probably Portugal - to reconcile their debt with a greatly depreciated currency and maybe finally get a handle on their economies.

The latest thinker to suggest this, Ashoka Mody of Princeton University in the US, wrote an opinion piece for Bloomberg on July 17, that succinctly lays out why a "Gerxit," rather than a Grexit, would be a preferable option.

"Some reorganization of the monetary union is almost inevitable over the course of the next 25 to 30 years," Mody told DW. "The only question that has to be asked at this point is: what is the most sensible way, the least disruptive way, of achieving that?"

Mody believes that Germany's Finance Minister Wolfgang Schäuble is wrongly conflating the problem of the Greek debt with the problem that is the eurozone experiment.

"Schäuble's assumption is that once Greece goes the rest of the eurozone will function perfectly well with the remaining members, and that the problem is not in the construction of the eurozone, but is in something special to Greeks who cannot adapt to the eurozone," Mody said.

While Mody acknowledges that Greece has a debt problem, he stresses that the issue of debt is separate from the other problems afflicting the eurozone monetary union. "If all that happens is that Greece exits the eurozone, the likelihood that this Greek-like problem reemerges is a near certainty … the fact that diverging countries cannot stay within a monetary and fiscal straightjacket, that reality will not change."

Mody, like many other economists and eurozone critics, points to Italy as the inevitable successor to Greece as the problem child of the euro. "We don't know whether Italy will be able to eventually repay its debts," Mody said, adding that "the process of forcing countries with different capabilities, different histories, different cultures, into one mold doesn't work."

For Mody, it's clear that the least disruptive way would be Germany reverting to its former currency, the deutsche mark. "Germany would experience the least pain in withdrawing from the euro," he said.

This idea of a Gerxit, rather than a Grexit, is not new. It stretches at least to 2012, when US business magnet George Soros penned a blog post about what a German exit would look like, and why it would be beneficial: Germany would get its own, stronger currency, and countries with weaker economies would be able to reconcile their debt with a much-weakened euro. Germans would be richer, southern Europeans would have a chance to be less poor.

Is Italy the next Greece?

As the world watches Greece’s besieged leadership limp forward in a effort to push through reform and pay back some of the staggering debt, eyes flicker nervously in Italy’s direction. Megan Williams reports from Rome. (22.07.2015)

Greece has used most of the bridge loan, which it received after reaching a deal with its creditors, to repay lenders. Experts say the country needs not only reforms, but also investors and an end to the Grexit debate. (22.07.2015)

The Baltic states are fairly new eurozone members. But after turning their economies around following deep recessions, many think Greeks should follow their lead and tighten belts for recovery, as Girts Orests reports. (20.07.2015)

French President Hollande has called for an overhaul of how the eurozone is governed, saying that a "stronger organization" of the 19-member currency bloc could help win back people who've sided with euroskeptics. (19.07.2015)

Greek PM Alexis Tsipras has reshuffled his cabinet and is attempting a fresh start. Well-known leftists have been sent packing. But some believe the prime minister is simply filling time until the next election. (18.07.2015)

On the same day when economist Mody published his analysis on Bloomberg, Ben Bernanke, former chair of the US Federal Reserve, posted an opinion piece on the website of the Brookings Institute, an influential Washington-based think-tank. In it, he argued that Europe was not holding up its end of the bargain when it came to solving the Greek debt crisis.

While unemployment in the eurozone has hung around 11 percent over the past several years, the jobless rate in the US has dropped to 5.3 percent, the lowest in years. But there are divergences even within the euro area, with Germany's unemployment rate currently standing at less than five percent, in contrast to the rest of the eurozone where it is hovering around 13 percent.

"The promise of the euro was both to increase prosperity and to foster closer European integration," Bernanke wrote. However, this is currently not happening and will continue not to happen when countries have such disparate outcomes, he underlined.

The countries not only have disparate outcomes, but hugely disparate economic backgrounds, say analysts. That is why, Mody argues, creating a monetary union among these states was never an economically sensible decision

"An ill-considered union was formed, and therefore pain will have to be incurred," Mody said.

Without strong political will to keep the eurozone intact, it's all but inevitable for the monetary union to break up, warn experts. The country that would suffer least from such a painful eurozone breakup, as Mody, Bernanke, Soros and several others have postulated, would be Germany.

However, others such as Professors Iain Begg and John Ryan, both of the London School of Economics, wasted no time calling the idea of a German exit a "disaster."

"After European Union membership, I think the construction of the euro is one of the greatest achievements that Germany has been able to achieve post-war," Ryan told DW. "From a political point of view, there's been a lot of capital put into the project. Going out of the euro would maybe send a bad message for the sustainability of the EU as well."

Furthermore, the euro is a major geopolitical achievement and powerful geopolitical tool, and Europe is currently considered a safe and easy place to invest and to do business, he noted.

"And Germany leaving the euro would just send an absolutely crashing message, and it's not conceivable to think that the eurozone could really survive after that." 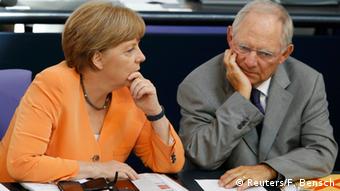 'Germany would experience the least pain in withdrawing from the euro,' says Mody

Should Germany exit, the world would quickly see, in rapid succession the Netherlands, Belgium, Austria, and the Baltic countries also running for the exit, Begg said. The continent would split, and both the north and the south would be in equal amounts of pain, with countries like Ireland, Slovakia and Slovenia left waffling in the middle.

A non-euro Germany, coupled with the subsequent split continent that a German exit would leave in its wake, would have "strong repercussions for European integration, never mind euro integration, that it would be seen as catastrophic in Berlin," Begg said.

A re-born deutsche mark would inevitably appreciate and be a very strong currency, both Ryan and Begg said, cautioning that although it may sound like a good thing, it's certainly not for German exporters who might face a loss of competitiveness.

"A Greek exit would be bad for the euro, but nowhere near as bad as Germany leaving the eurozone," Ryan said. "That would be a catastrophe for Germany and for the eurozone itself, and it would call into question the whole European construction."