Why the debate over a Grexit hurts growth prospects | Business | Economy and finance news from a German perspective | DW | 22.07.2015

Greece has used most of the bridge loan, which it received after reaching a deal with its creditors, to repay lenders. Experts say the country needs not only reforms, but also investors and an end to the Grexit debate. 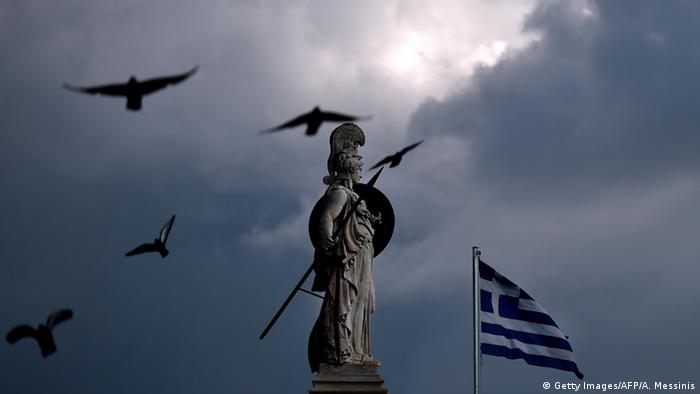 The past few days offer a snapshot of how the Greek economic crisis has been handled so far. A bridge loan worth about 7.2 billion euros was hastily arranged by the EU to keep Greece financially afloat until a new aid package is agreed by eurozone member countries.

The money was transferred to Greece on Monday, July 20, and it immediately left the country again as Athens had to repay some 6.5 billion euros to the European Central Bank (ECB) and the International Monetary Fund (IMF).

It is the same old story: creditors lending money to Greece so that other lenders get their money back. There will soon be negotiations over a third bailout package, which could offer Greece up to 86 billion euros.

"The money will be used primarily to refinance the Greek debt. In doing so, they are repeating the mistakes of the first bailout program," Panos Tsakloglou, professor at the Athens University of Economics and Business, told DW. It was mainly European banks that benefited from the multibillion-dollar loans Greece received as part of the program, he said.

Tsakloglou, who was an advisor to three predecessors of current Prime Minister Alexis Tsipras, stressed that economic reforms leading to increased competitiveness and promoting entrepreneurship are absolutely needed in Greece. 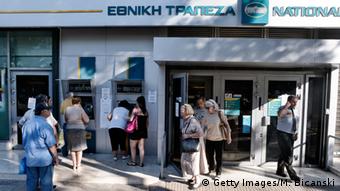 However, the economist cautioned that austerity alone would not help in overhauling the Greek economy. "It is only possible through investment," he said.

But where will the money for investments come from? Sven Giegold, a member of the European Parliament, said current plans for the third bailout program foresee a mere 3.5 billion euros in additional funds for investment.

The 3.5 billion euros is not enough to compensate for the drop in aggregate demand caused by billions of euros worth of pension cuts, tax increases and a host of other austerity measures Greece has to implement as part of the bailout package, Giegold wrote on his website: "That's why the deal makes little economic sense."

Tsakloglou agreed. "What we need is capital. That is what we are currently lacking," he said. If reforms succeed in turning Greece into a business-friendly location, then money could flow from European investment funds, he said, adding that the bulk of the investment would have to come from the private sector.

The Greek government has submitted a second wave of creditor-demanded reforms to its parliament for approval. The first batch of measures linked to a huge rescue package sparked a mutiny within the ruling Syriza party. (21.07.2015)

Banks call for Greeks to return 40 billion in savings

Banks say their liquidity problems would be solved if the 40 billion euros that was emptied over the past seven months is returned to accounts. Much of the cash is believed to be held overseas or in safes at home. (20.07.2015)

Greece no longer in default with IMF

The International Monetary Fund has said it received an overdue payment from Greece, taking the country out of arrears. Athens has also initiated repayment of overdue loans to the European Central Bank. (20.07.2015)

Germany benefits from Greek woes as the young and well educated leave the economically troubled country and seek jobs in financially stable Germany. (20.07.2015)

But even big companies in Greece are finding it difficult to raise money. "They are having to pay interest rates ranging between 8-9 percent, if they wish to borrow money for three to five years," Tsakloglou said.

He said labor costs are no longer a problem in Greece as wages in the country have fallen to the level of the late 1990s. "But all the competitive advantages that low wages bring are lost due to the higher cost of capital," Tsakloglou said.

Furthermore, Greek banks' financial position is so weak that they are currently unable to provide loans for investments. Nonperforming loans held by Greek banks amounted to a third of their total loan book at the start of this year, according to estimates.

Jürgen Pfister, a former chief economist at Bayerische Landesbank and now an independent economist, said the proportion of bad loans held by the banks currently might be even higher, citing the significant deterioration of the country's economic situation over the past few months. "The economic situation might remain shaky for the rest of the year," he said.

On Wednesday (22.07.2015), parliament in Athens is expected to adopt the EU's bank recovery and resolution directive, among a raft of other reforms. "It would open the way for the so-called bail-in, which imposes losses on shareholders and creditors of ailing lenders before any taxpayers' money can be tapped in a bank rescue.

There are, however, no clear boundaries on this front. Since the outbreak of the economic crisis, the government has been a shareholder in Greece's four major banks, and it would therefore be affected by the costs of restructuring the banks.

Nevertheless, the main question remains: Are the planned measures enough to restore financial health to Greek banks so that they could again start performing their main task, which is to finance investment? "Even if the economy slowly picked up, it would certainly take until 2018 or 2019 for the banks to get out of the woods," Pfister predicted.

Foreign investment in Greece is therefore all the more important. That is also the reason why creditors have pressured Greece for the privatization of its state-owned companies. But the Syriza government has so far vehemently opposed it by arguing that selling state assets at fire-sale prices in the midst of a crisis is tantamount to squandering the nation's wealth.

Following three weeks of closure, Greek banks finally reopened their doors this week. However, capital controls are still in place and people are allowed to withdraw a maximum of only 420 euros per week, while making money transfers to other countries requires approval from authorities. 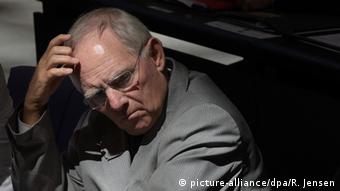 Pfister believes the controls will remain in place "at least until the end of the year." Restoring confidence in the stability of the Greek state and the country's banking system is a prerequisite for lifting capital controls, he said.

"It is therefore important to put an end to the endless debate on a potential Greek exit from the eurozone," said Athens-based economist Tsakloglou.

It is due to the fear of a Grexit that people have been emptying their bank accounts and the economic situation in the country has come to a standstill, he said, adding that the talk of Grexit has made investors cautious about putting their money in the country.

Wolfgang Schäuble, the German finance minister, however, has not stopped raising the prospect of a Grexit even after Athens and its creditors reached a bailout deal on July 13. A voluntary exit from the eurozone "could perhaps be a better way" for Greece, he recently told the German magazine "Der Spiegel."

The ECB bank has raised key rates by 50 basis points, more than it had signaled. The hike could hurt its credibility as being predictable, but that's a small price to pay in these unusual times, says Ashutosh Pandey.