Germany has long debated whether or not it should ban the far-right NPD, the National Democratic Party, by using its constitutional laws. Each time though, the debate has been thwarted. So can Germany ban the NPD? 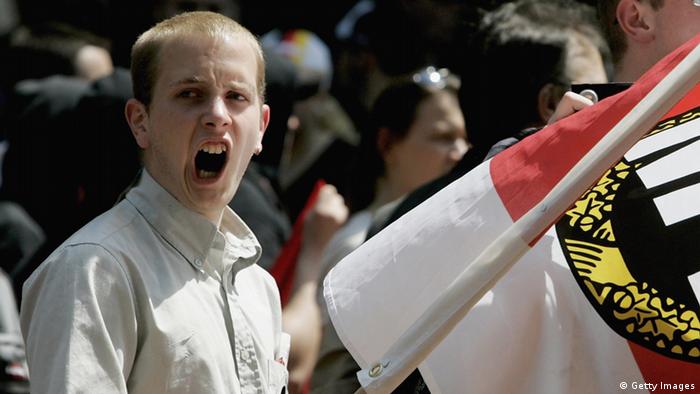 Few dispute that right-wing extremist parties are undemocratic. But proving their unconstitutionality is a touchy issue and makes instituting a political ban difficult.

The NPD currently holds seats in two state parliaments: Mecklenburg-Western Pomerania and Saxony, both in eastern Germany, but nothing in the national parliament. Interior ministers from all 16 German states have agreed to begin the process to ban the National Democratic Party (NPD). But it's likely to prove a long process. And it's one that failed once before.

DW asks whether or not it will be possible to ban the NPD this time and looks at the current state of investigations into the far-right, and what politicians, as well as other groups, are doing to lessen the influence of the right-wing movement.

The upper house of the German parliament wants to ban the NPD, but it's not supported by the government. The lower house, the Bundestag, has debated the issue, and it's refused to back a ban. (25.04.2013)

Can a local, right-wing extremist movement have wide-ranging economic consequences? It turns out that it can - and it's a lesson the German state of Mecklenburg-West Pomerania is learning the hard way. (01.05.2013)

The German capital has seen a third day of demonstrations over a new center for asylum seekers. The protests could bring the issue of immigration more to the fore as general elections loom. (21.08.2013)

Thousands have turned out to protest against the far-right NPD and to support asylum seekers in an eastern German village. Hundreds of right-wing extremists had demonstrated against an asylum shelter for refugees. (17.11.2013)

The long-awaited trial of Beate Zschäpe and four alleged supporters of the National Socialist Underground (NSU) has begun in Munich. But who are the defendants charged with involvement in 10 murders? (05.05.2013)

Does an NPD ban make sense?