As German politicians debate banning the extreme right-wing NPD, a new right-wing party has crept onto the political scene. The Right appears ready to take over political leadership of the far-right. 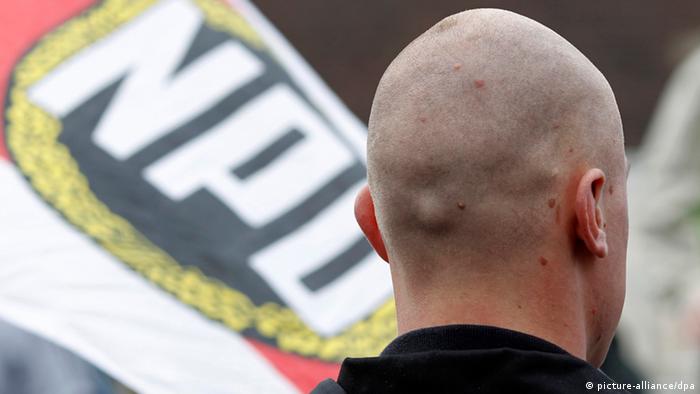 Founded in May, "Die Rechte" - or The Right - chose a name that reflects its program and was likely deliberately chosen as an analogy to the left-wing party "Die Linken" - or The Left. In its political program, The Right claims it fully adheres to the German constitution and aims for democracy and stronger citizens' participation.

The program, however, also calls for the "preservation of the German identity," which is defined as a "core concern" for the party. The program calls for the abrogation of "tolerance permits granted to foreigners permanently living in Germany."

"An amalgamation of right-wing ideas" 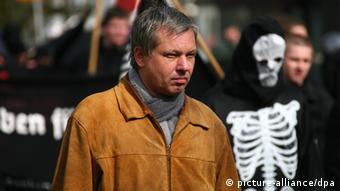 Christian Worch has been an active Neo-Nazi for 35 years

"The program is an amalgamation of various right-wing political ideas, based on the Deutsche Volksunion," Bernd Wagner, an expert on right-wing extremism at the Centre for Democratic Culture in Berlin, told Deutsche Welle.

It's no coincidence. Since The Right sees itself as the successor of the "Deutsche Volksunion" (German People's Union, DVU), a right-wing extremist party that merged with the Nationaldemokratische Partei Deutschlands (National Democratic Party of Germany, NPD) in 2011.

One of The Right's founding members and current chairman is Christian Worch, a former high-ranking member of the DVU.

Catch-all for the entire right-wing spectrum

The Right has adopted large swathes of the DVU's political program. "But, in fact, everything from ultra-militancy to moderate criticism of the democratic order fits under this umbrella. We need to wait and what direction the party takes internally," Wagner said.

On its website, The Right positions itself as "less radical than the NPD," but "more radical than the REPs" (Die Republikaner, the Republicans, a right-wing party founded in the 1980s) and the "Pro-movements" (right-wing citizens' movements that recently made headlines for their aggressive stance against Islam).

But, "in the foreseeable future," The Right does not see much common ground with these groups, according to its program. 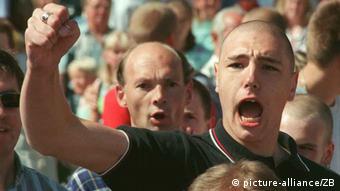 This underlines that The Right aims to be more than just another alternative on the of the right-wing fringe of the political spectrum. Instead, the party sees itself as a catch-all for everyone to the right of the Christian Democratic Union (CDU), the major German center-right party led by Chancellor Angela Merkel.

The ongoing political debate of a possible ban of the NPD likely played its part in convincing The Right members to form a political party.

"That was probably one of Christian Worch's main political considerations. After all, he's a Neo-Nazi political veteran and he probably senses an opportunity to increase his political strength," Hajo Funke, an expert on right-wing extremism and anti-Semitism who teaches at the Free University in Berlin, told DW.

Founding member Worch: One of the leading figures of the Neo-Nazis

Worch has rejected any strategic interest linked to the possible NPD ban. But given his biography this is as hard to believe as the claim that “Die Rechte” is less radical than the NPD.

The 56-year-old Worch is a leading member of the militant neo-Nazi scene in Germany. Ever since the late 1970s, the trained legal assistant has been active in various right-wing organizations, several of which have subsequently been banned. One of his political companions, Michael Kühnen, was one of the most influential figures in the militant neo-Nazi scene in Germany.

Following Kühnen's death in 1991, Worch established himself as the leading figure and the concept of "Freie Kameradschaften," which roughly translates to "free comradeships," is widely seen as this brainchild.

Since the mid-1990s, neo-Nazis have used the Freie Kameradschaften, which lack a formal organizational structure, as a means of circumventing governmental sanctions. Following the ban of several of these comradeships by the state Interior Ministry in North Rhine-Westphalia this summer, The Right managed to establish several political branches in the region with the help of former Kameradschaften members.

The party has also founded a regional branch, chaired by the former leader of the banned group "Nationaler Widerstand Dortmund" (National Resistance Dortmund).

NPD ban could impact on The Right 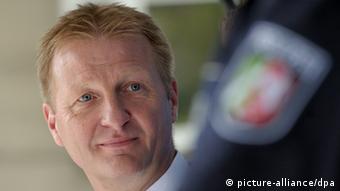 Ralf Jäger: "You don't talk about bans, you enact them."

However, Funke isn't convinced that Worch's strategy will necessarily be crowned with success.

"The re-activation of the banned comradeship is as per definition out of the question," Funke said.

North Rhine-Westphalia's Interior Ministry seems to be considering a ban.

"We will see whether this regional branch survives for very long," state Interior Minister Ralf Jäger said. "You don't talk about bans, you enact them."

The same fate could befall the federal party, too, should leading members of the NPD join The Right following a ban.

"In the case of such a ban being implemented, it also includes a ban on joining a similar organization," Funke explained. "If a considerable number of NPD members drift to The Right, then the party is in turn liable to be banned."

Can The Right pose a real threat?

Journalist Andrea Röpke, who has covered the right-wing scene in Germany for many years, is convinced that it's out of the question that The Right would ever become a political repository for the NPD leadership.

"Worch has fallen out with the NPD leadership and is too controversial given his past," Röpke told DW.

Worch is speculating that people buy his party's democratic veneer. The association with The Left makes it easy for to approach "normal citizens and argue that if there is Left(-wing) party, then consequently there should also be a Right(-wing) one," Röpke said.

But Wagner said he thinks The Right may constitute a threat.

"I'm convinced that this party is indeed capable of development: Up to this point, the people who are part of this structure are in fact politically viable," he said. "Which means they may be able to build an organizational structure."