After a failed try in 2003, German officials are again seeking to ban the country's largest far-right party. State leaders plan to file their case soon with Germany's highest court - but it's a controversial move. 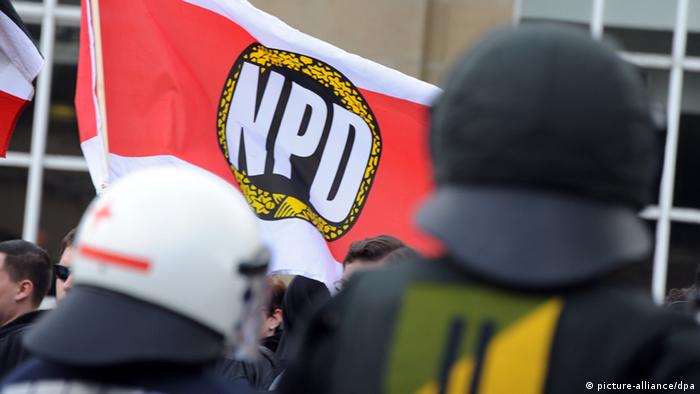 Germany's far-right National Democratic Party (NPD) is now exploiting any opportunity to raise its profile. It regularly mobilizes its members in protest against foreigners and immigration to Germany, while promoting right-wing ideology.

Recent examples abound. The group organized a rally this summer against asylum seekers, who were taking up residence in a shelter in Berlin's outer Hellersdorf district. During Germany's federal election campaign earlier this year, the NPD distributed condoms to "foreigners and selected Germans." Online and at public events, the group voices its opposition to parliamentary democracy.

The interior ministers of Germany's 16 states say such actions make it obvious that the NPD is in violation of constitutional principles such as the provision of respect for human dignity. As a result, they have launched a second attempt to ban the party, which is represented in two of Germany's state parliaments. A similar effort failed in 2003.

Beginning Tuesday (03.12.2013), the states' petition will be discussed one final time at a conference of interior ministers before it is sent on to Germany's Federal Constitutional Court in Karlsruhe. Its supporters believe that, this time, the ban will succeed. 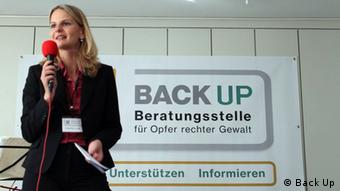 Claudia Luzar heads a group aiding victims of right-wing violence, but she opposes banning the NPD

But Federal Interior Minister Hans-Peter Friedrich of the conservative CDU party does not share their optimism. The news magazine Der Spiegel reports that Friedrich said, "The states will have to go it alone," in reference to the fact that Germany's federal government and parliament are not involved in the petition to ban the party, as they were in 2003.

Political scientist Claudia Luzar also believes the motion to ban the NPD will fail. The Dortmund-based professor read through the 244-page document and said, "There are no new revelations in the petition. I think it will have no effect."

During the 2003 effort to ban the party, the federal government under the former (Social Democrat) Chancellor Gerhard Schröder helped lead the charge. But the constitutional court, the country's highest, never ruled on whether the NPD was in violation of the constitution, because the case collapsed on procedural grounds.

The problem in 2003 was that informants working for German police and intelligence had infiltrated the NPD all the way up to its leadership. The informants were receiving money from the state for delivering privileged information on the right-wing group's activities, and they also had influence on the party's leadership. Since the state could have had an active hand in shaping the NPD's approach, the court said a ban could not be enforced.

Meanwhile, however, those behind the renewed attempt to ban the party believe informants are no longer active at the top levels of the NPD. The state interior ministers say information for their ban petition was collected entirely without the aid of insider sources. 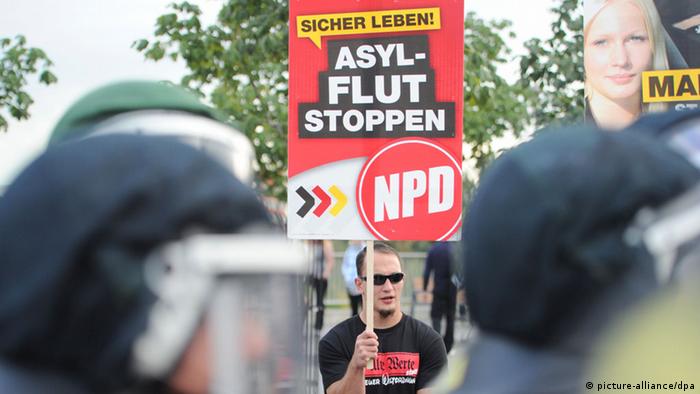 Tax funds going to the NPD

Should the petition fail once more, it would be disastrous, activist Patrick Gensing said in an interview with DW. "After the failure 10 years ago, the NPD has become very strong because there's a feeling that it cannot be outlawed," said Gensing, who has been active on the issue of right-wing violence. He runs the blog publikative.org, which DW honored with its BOBs Award.

Despite the risk, Gensing welcomes the states' initiative. "For minorities who are affected by the NPD's agitation, it's unconscionable that such a party exists in Germany," he said.

Adding insult to injury is the fact that the NPD finances itself in large part with German taxpayers' money, because of its status as a legal party with small representation in two state parliaments. If the organization were declared illegal, it would no longer be able to draw funding from taxes.

Mathias Wörsching, who works for the Mobile Counseling Team against Right-wing Extremism (MBR) in Berlin, would also like to see the party prohibited. "A ban on the NPD would be a big help to everyone who's working against right-wing extremism in Germany," he said. 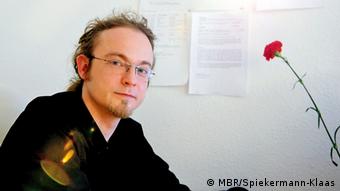 But the activist also says he's concerned the state's petition will not meet the criteria necessary for a ban. Part of what's missing, according to Wörsching, is clearly perceptible pressure from society to carry out the prohibition.

That pressure is not particularly high right now. Even if there's widespread agreement that the NPD advocates extremism and violates constitutional principles, not everyone supports a ban on the group. Even politicians within the Left and Green parties in Germany have voiced opposition to an outright ban.

Claudia Luzar agrees that prohibiting the party entirely is the wrong way to go. "It would simply ensure that the party's leaders go underground, and we couldn't control them any more," she says. "The problem of right-wing violence will not be eliminated that way."

The political scientist tells DW that there is a dearth of long-term projects aimed at combating extremism. And, she adds, the police, intelligence authorities, activist groups and researchers must work together more closely in order to stop right-wing ideology from spreading.

Germany has long been debating whether or not it should ban the far-right NPD, National Democratic Party, by using its constitutional laws. Each time though, the debate has been thwarted. So can Germany ban the NPD? (03.12.2013)