For the last eight years, Ukrainian giants Shakhtar Donetsk have been homeless, living a nomadic existence in their own country. Since the full-scale Russian invasion, the future of the club from the Donbas is unclear.

When the Russian army launched its assault upon Ukraine on February 24, Shakhtar Donetsk defender Mykola Matviienko was sleeping next to his wife and child in Kyiv.

"I heard explosions outside the window, and we immediately jumped up," recalls the Ukrainian international. "We spent the rest of the night in the car until we got the message that Kyiv was under attack, and we had to leave."

Easter weekend should have seen Shakhtar take on archrivals Dynamo Kyiv. Only two points separated the teams at the top of the Ukrainian Premier League when competition was suspended due to the invasion, but now nothing could be further from the players' minds.

Instead of trying to extend their lead in the title race, Shakhtar are playing a series of friendly matches in a "Global Tour for Peace" to raise money for the Ukrainian army and victims of the war. 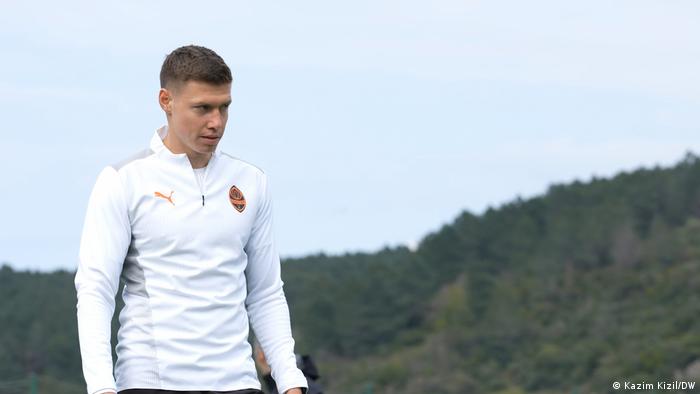 Mykola Matviienko, training in Istanbul ahead of the friendly against Fenebahce, dreams of playing for Shakhtar in Donetsk

In the first game, a 1-0 defeat to Greek league leaders Olympiacos, Matviienko and his teammates took to the field wearing shirts bearing the names of towns and cities which bore the brunt of the initial Russian assault: Mariupol, Irpin, Hostomel and Mykolaiv, among others.

"We want the names of these places to be known around the world," teammate Anatoliy Trubin told DW. "I still don't understand how there can be a war like this in the 21st century in which people die every day — in the country I love and where I grew up."

The tour continued with another 1-0 defeat against Fenerbahce in Istanbul on Tuesday, with games against Hajduk Split in Croatia and Lechia Gdansk in Poland to follow.

But Matviienko and goalkeeper Trubin are used to being on the road; Shakhtar —like local rivals Zorya Luhansk — have been playing away from home ever since war broke out in the eastern Donbas region in 2014.

'My dreams have changed'

"I was 17 and had just come back from a summer holiday on the train," recalled Matviienko. "The next day, the station was pretty much gone and we were evacuated to another town." But the station wasn't the only target.

Shakhtar's stadium, the brand-new Donbas Arena, financed to the tune of €176 million ($191 million) by Ukrainian oligarch and Shakhtar President Rinat Akhmetov, was opened in 2009 in the presence of former President Viktor Yushchenko and singer Beyonce. It was a five-star category UEFA stadium at Euro 2012 and attracted crowds of 40,000 in the 2012-13 season. 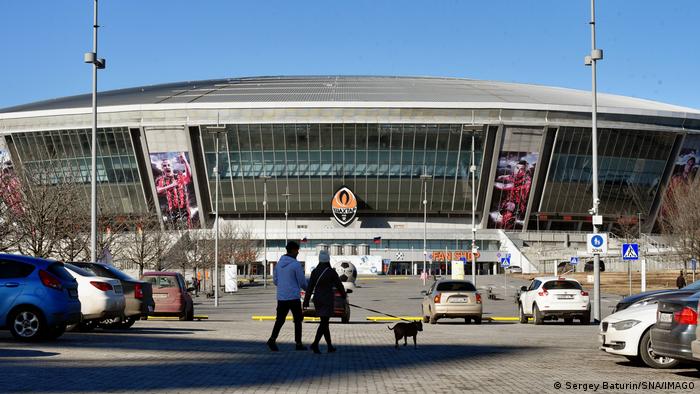 The Donas Arena was built for Euro 2012, hosted by Poland and Ukraine. It was damaged by shelling in 2014

But it was damaged by shelling when fighting began in 2014, as was the newly opened Donetsk International Airport, which became the scene of two major battles between Ukrainian troops and Kremlin-backed separatists.

As for Shakhtar, they moved west, playing in front of around 7,000 exiled fans first in Lviv, then in Kharkiv and since 2018 in Kyiv, where the players were already living and training. But it's not home.

"I used to go to the Donbas Arena as a teenager and it was always my dream to actually play in this amazing stadium," said Matviienko. "We all believe we'll play football there again one day."

"My dreams have changed," said Trubin. "I just want peace to return to Ukraine. And then I want to play in the Champions League with Shakhtar in front of a full Donbas Arena."

The man behind Shakhtar: Rinat Akhmetov

Despite the challenges, Shakhtar Donetsk have enjoyed considerable success on the field, including 13 Ukrainian league titles this century — second only to Dynamo Kyiv with 20 in total.

In 2020, the nomadic "Miners" — so named due to the rich coal deposits in the Donbas region — reached the semifinal of the Europa League, a competition they won in 2009 when they beat Werder Bremen in the final to crown the club's greatest European triumph. 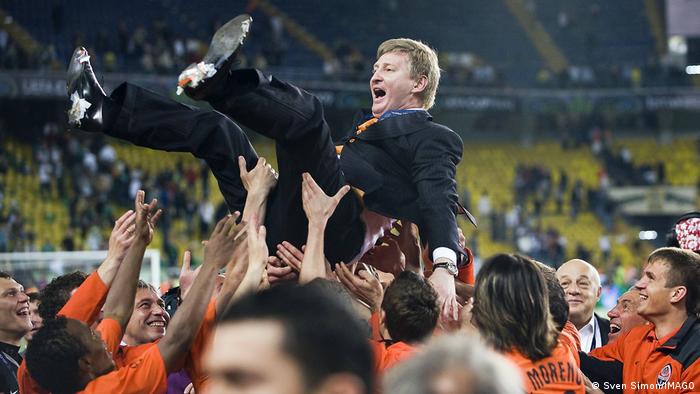 The successes are due in large part to one man: owner Rinat Akhmetov, a former professional boxer and one of the richest men in Ukraine with an estimated fortune of €7 billion ($7.58 billion), who took over the club in 1996. Since then, he has invested over €1.5 billion in the club, saving Shakhtar from bankruptcy and establishing them among Europe's elite.

Under Akhmetov, Shakhtar have placed particular emphasis on Brazilian players, spending almost €300 million on players such as Fernandinho (now at Manchester City), Fred (now at Manchester United) and Douglas Costa (who later played for Bayern Munich and Juventus).

Since the Russian invasion, the 13 Brazilians currently under contract at Shakhtar have managed to escape the country, some after spending two weeks sheltering in the basement of a hotel in Kyiv with their families. The war has changed everything.

"One of our members of staff, a youth coach, died yesterday," announced chief executive Serhiy Palkin last Thursday. "He was killed by shrapnel from a Russian shell. Russia is killing Ukrainians. Stop this madness!"

Why the Donbas region is so important to Putin

Aside from war, death and destruction, Shakhtar are set to face other issues once — and if — peace is restored and football continues.

At the start of March, FIFA allowed foreign players in Ukraine and Russia to terminate their contracts and join new clubs for the coming season. Whether Shakhtar will even have a full squad for the next campaign is unclear.

However, one thing is certain: "No, we won't play against Russian teams anymore," said Matviienko. "The world has to understand that this is genocide. These people must be isolated."

Ukraine says Russia is launching attacks in Donetsk, Luhansk — as it happened

Russian troops have started "an attempt" to break through Ukrainian positions around Donetsk, Luhansk and Kharkiv, but the defenses are holding, according to Ukraine's top security official. DW has the latest.