Officials said the theater's bomb shelter, where hundreds of civilians had been hiding when an airstrike hit, withstood the attack. Survivors are believed to be trapped underneath. 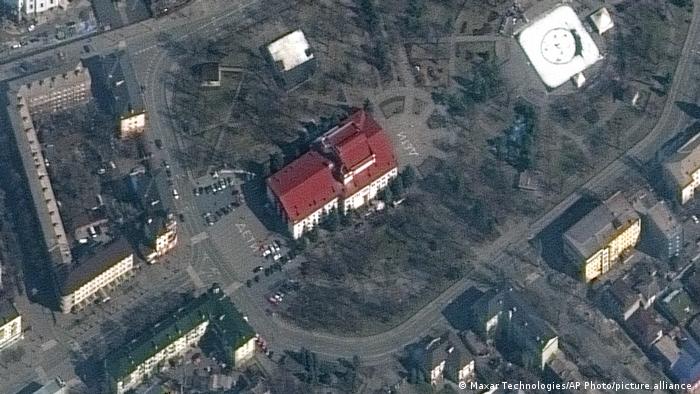 This satellite image shows the Mariupol Drama Theater on Monday, before it was destroyed on Wednesday

Authorities in the Ukrainian port city of Mariupol on Thursday were searching for hundreds of civilians who had been sheltering in a theater hit by an airstrike.

Mariupol's officials had claimed the three-story theater, which had been serving as a makeshift bomb shelter, collapsed after a Russian strike on Wednesday evening.

More than 1,000 civilians were taking refuge in the building in the besieged city, according to Ukrainian officials.

Moscow had denied bombing the theater, with Foreign Ministry spokeswoman Maria Zakharova saying the allegation against Russian forces was a "lie." 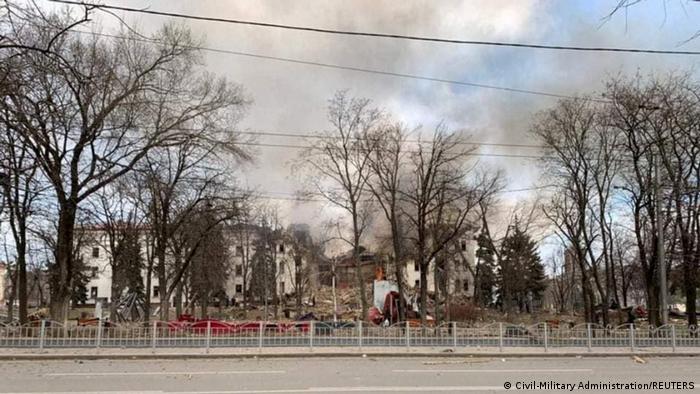 The three-story theater collapsed after the strike Wednesday evening

'People are coming out alive!'

Ukrainian lawmaker Serhiy Taruta said on Thursday that there were no casualties reported so far after the strike.

"After a terrible night of uncertainty, on the morning of the 22nd day of the war, finally good news from Mariupol! The bomb shelter has held out," Taruta wrote in a Facebook post. "People are coming out alive!"

An official at the Mariupol mayor's office was quoted by the Reuters news agency as saying that the bomb shelter withstood the bombing, adding that authorities believed survivors were trapped underneath.

"The bomb shelter held. Now the rubble is being cleared. There are survivors. We don't know about the [number of] victims yet," mayoral advisor Petro Andrushchenko told Reuters.

What is the situation in Mariupol?

The port city in eastern Ukraine has been under siege by Russian troops since the invasion began on February 24.

The city holds a crucial strategic importance to Russian forces, as its capture could help them establish a land corridor to Crimea, which Russia seized from Ukraine in 2014.

Mariupol authorities have said the city is on the verge of a humanitarian catastrophe, with little access to basic resources such as water, medicine, food, gas and electricity.

Sergei Orlov, Mariupol's deputy mayor, told Forbes Ukraine that 80% to 90% of the buildings in Mariupol had been bombed.

"Not a single building is undamaged," he was quoted as saying.

According to Ukrainian figures, thousands of people had managed to leave Mariupol, which had been home to 400,000 people, through humanitarian corridors.

"My heart breaks when I see the destruction": evacuated Mariupol resident Maria Sirychenko