Brazilian footballers from top Ukrainian clubs Shakhtar Donetsk and Dynamo Kyiv have appealed to their government for help leaving the country in a video message. The league has been suspended, but some are staying on. 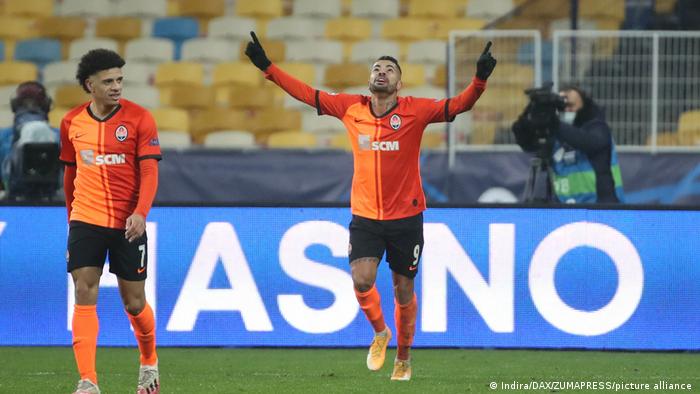 A number of Brazilian players attached to clubs in Ukraine have sent a heartfelt video plea to their government to help them escape after Russia launched a widespread attack on Thursday.

"The situation is one of despair. I ask you to disclose this video so that it reaches the [Brazilian] government," Shakhtar striker Junior Moraes says in the message posted on Twitter by a number of journalists connected to the region or the players. The players' partners and some young children also appear in the video, shot in a hotel.

"Borders are closed, banks [are shut], there is no fuel, there will be a shortage of food, there is no money," Moraes says.

Moraes also posted a similar message on Instagram, as did a number of his compatriots from both clubs, who usually jostle for football supremacy in the country.

"We are here asking for your help, due to the lack of conditions in the city, closed borders, closed airspace. There's no way we can get out. We ask a lot of support from the government of Brazil, which can help us," Shakhtar defender Marlon Santos said in an Instagram video.

Shakhtar have long recruited Brazilian players, offering them a shop window to secure a move to the more lucrative leagues in the west of Europe. Former Bayern Munich winger Douglas Costa, ex-Chelsea star Willian and Manchester City stalwart Fernandinho are among those to have walked that path.

Since the conflict between Russia and Ukraine in 2014, Shakhtar have been forced to play in a number of Ukrainian cities including Lviv, Kharkiv and Kyiv.

UEFA have decision to make

The club's Italian boss, Roberto de Zerbi, only took over in 2021, but he feels an obligation to stay, despite reports that the league is suspended.

"It's a bad day — this night explosions woke us up," he reportedly told Italpress. "They've closed the airspace. The Italian embassy urged us to leave, but I couldn’t turn my back on Shakhtar, football, and leave this way."

Both Dynamo and Shakhtar finished bottom of their Champions League groups this season, meaning that they are out of European competition, though Russian sides Zenit St. Petersburg and Spartak Moscow remain in the Europa League for now. European football's governing body, UEFA, is set to make a decision on potential terms of their continued participation and whether St. Petersburg will remain the 2022 Champions League final venue on Friday.