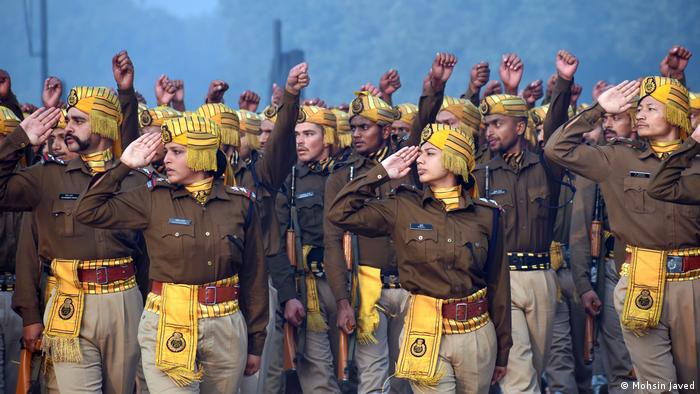 India's Supreme Court on Monday ordered the country's government to grant permanent commission and command positions to female officers in the army on par with men, asserting that the government's arguments against the policy were "disturbing" and based on gender stereotypes.

The court's decision means that Indian women will get the same opportunities and benefits as their male colleagues, including ranks, promotions and pensions, and be allowed to serve longer tenures.

At present, female officers can serve for only 10 to 14 years in the Indian army.

"It was a memorable day for us. It's a big victory and will go a long way," Lieutenant Colonel Anupama Agarwal told DW.

"It was worth the wait. The fight was for parity, and despite the long struggle there is light at the end of the tunnel," said Lieutenant Colonel Sandhya Yadav, who filed the court petition in 2008.

It has been a long and arduous struggle for the Indian army's women officers, despite serving with distinction over the years and having won many accolades for their service.

Read more: India to have female fighter jet pilots by 2017

No to combat roles?

India has one of the largest armies in the world, but women make up just about 4% of the force's over one million personnel.

The Indian army has long resisted including women in combat roles, citing concerns over women's vulnerability if captured and over their physical and mental ability to cope with frontline deployments.

Senior army personnel welcomed the court's verdict but sounded a word of caution.

"Now that the decks are cleared, women officers should prove they are worthy to earn command positions. This is a highly professional army and there are no entitlements, the positions have to be earned," Lieutenant General Ravi Sawhney, a former deputy chief of the army, told DW.

Lieutenant General Shankar Prasad, a retired officer, shared a similar view. "Yes, it is a good move. Now, they will learn to work in hostile environments while commanding units such as artillery and infantry when the positions open up and they earn their spurs."

Read more: 'Becoming a fighter jet pilot was not easy'

Pentagon to lift ban on women in combat

Monday's decision comes days after the government told the court that women were not suitable for commanding posts such as colonels and brigadiers in the army, saying male troops were not prepared yet to accept female officers.

It said most soldiers in the Indian army were men from rural backgrounds who were not "mentally schooled to accept women officers in command."

The government had also argued that male and female officers could not be treated equally when it came to postings because the "physical capacity of women officers remains a challenge for command of units."

Even India's former army chief and current Chief of Defense Staff, General Bipin Rawat, previously commented that women were not ready for combat role because they were responsible for raising children and would accuse male officers of peeping into their quarters.

"She will say somebody is peeping, so we will have to give a sheet around her,'' Rawat had told CNN-News18.

The court said in its order that such arguments were against the concept of equality.

"The contentions of the government regarding the issue of physiological limitations and social norms to deny opportunity to women officers is disturbing and cannot be accepted," Justice DY Chandrachud said while reading out the court verdict.

"To cite challenges of confinement, motherhood and childcare as reasons for not giving them command posts speaks of a patriarchal mindset. They (women) have already proven their mettle and courage under fire," Aishwayriya Bhati, the lawyer representing the officers, told DW.

Most countries employ women in various roles in their armed forces, but only a handful, including Australia, Germany, Israel and the United States, allow them to take on combat roles.