Serbia refuses to compromise on Kosovo despite German pressure | Europe| News and current affairs from around the continent | DW | 26.08.2011

Serbia refuses to compromise on Kosovo despite German pressure

Serbia has once again vowed never to recognize Kosovo's independence, despite German Chancellor Angela Merkel's warning on Tuesday that Belgrade's rift with Pristina could threaten Serbia's bid to join the EU. 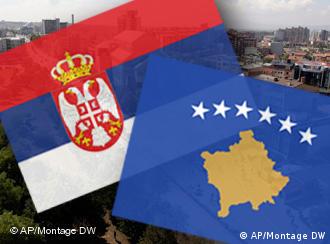 Serbian President Boris Tadic on Friday reiterated that his country would never accept an independent Kosovo, even if it meant endangering its hopes of joining the European Union.

"Serbia will not abandon its people in Kosovo," Tadic told the state news agency Tanjug. "If Serbia is requested to choose ... my response will be that Serbia will not give up its legitimate interests."

The comments came in response to German Chancellor Angela Merkel's visit to Belgrade on Tuesday, when she made it clear that Belgrade had to work towards easing tensions with Kosovo, which declared independence in 2008, but has not been recognized by Serbia.

Merkel insisted that, apart from pushing through economic reforms, Belgrade had to abandon parallel government institutions in pro-Serbian northern Kosovo, if Serbia was serious about EU membership. 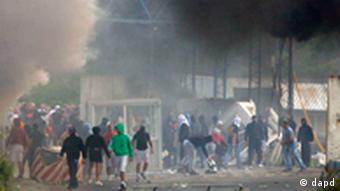 "The request for Serbia to take part in abolishing national institutions such as hospitals and schools is unnatural and Serbia cannot accept such a demand," Tadic said. He also insisted he would continue his policy of pursuing his EU bid while maintaining that Kosovo is part of Serbia.

Serbia was hoping to start EU accession talks by the end of the year, after it arrested its two remaining fugitives from the Bosnian and Croatian wars in the 1990s - Ratko Mladic and Goran Hadzic - who were handed over to the Yugoslavia War Crimes Tribunal.

But Germany, which provides the largest contingent in NATO's peacekeeping mission in Kosovo, insists that Kosovo's independence is non-negotiable. Serbia, however, sees the territory as the cradle of Serbian history and culture and it is also still formally the seat of the powerful Serbian Orthodox Church.

Last week, Serbia and Kosovo reached a temporary deal to diffuse tensions, which flared up along the border in July when Kosovo tried to take control of customs outposts. EU-mediated talks between Pristina and Belgrade stalled, until the two sides agreed to resume negotiations in September, in talks mediated by the NATO commander in Kosovo, German General Erhard Bühler.

Chancellor Angela Merkel has appealed to the Serb government to redouble diplomatic efforts with Kosovo. President Boris Tadic, however, has reiterated he will not recognize the former Serb region as a separate country. (23.08.2011)

During a visit to Croatia, German Chancellor Angela Merkel praised the country as an economic and political role model for nations in the politically troubled Balkan region. On Tuesday, she continues her tour in Serbia. (23.08.2011)

After days of deadlocked talks, NATO and representatives from Kosovo and Serbia have struck a deal that will ease tensions at border crossings. The deal sees NATO troops controlling the crossings for the time being. (05.08.2011)