Separatists have taken another government building in eastern Ukraine. A self-declared mayor in Ukraine says he will negotiate the release of military observers only if the EU drops sanctions against separatist leaders. 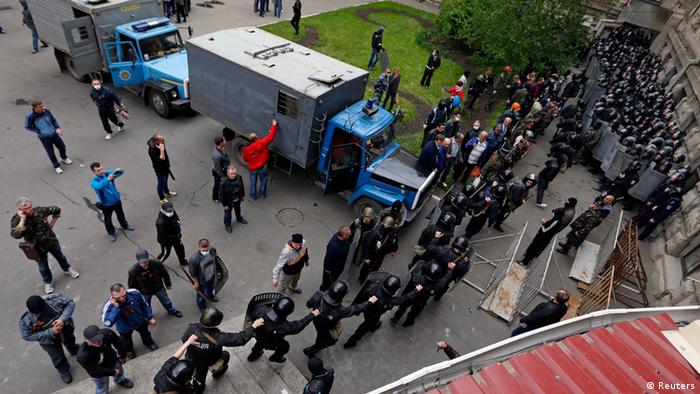 More than 3,000 separatists stormed a regional administration building in Luhansk on Tuesday, news agencies reported. A vanguard of about 20 youths armed with metal bars broke a window to get inside the building, which police had left unguarded. They pulled down the Ukrainian flag, replaced it with Russia's tricolor and opened the building's doors to the waiting crowd.

In Slovyansk, pro-Russian separatists continue to hold about 40 people hostage, including the observers from the Organization for Security and Co-operation in Europe (OSCE), captured at the weekend.

"We will resume dialogue on the status of the prisoners of war only when the European Union rejects these sanctions," Ponomaryov told the Interfax news agency on Tuesday. "If they fail to remove the sanctions, then we will block access for EU representatives, and they won't be able to get to us. I will remind my guests from the OSCE about this."

The United States and European Union expanded sanctions on Monday.

On Tuesday, Russian Defense Minister Sergei Shoigu told his US counterpart, Chuck Hagel, that the country had withdrawn troops from Ukraine's border. Russian officials say their country has played no role in the separatist uprising and that Russian-speaking Ukrainians have occupied administrative buildings to demonstrate their concern that the interim government in Kyiv could restrict their rights.

"Russia was forced to launch large-scale exercises near the border with Ukraine, facing the prospect of military action against civilians," a Russian Defense Ministry statement quoted Shoigu as saying on Tuesday. "Once the Ukrainian authorities declared that they would not use regular military units against the unarmed population, the Russian troops returned to barracks," he added.

Hagel demanded that the country end its "destabilizing influence inside Ukraine" and warned that "continued aggression would further isolate Russia and result in more diplomatic and economic pressure." NATO officials say they have seen no sign of Russian troops withdrawing from the border

On Tuesday, the European Commission pledged 365 million euros (505 million dollars) to help stabilize Ukraine. The funding would help in "addressing short-term economic problems and preparing for in-depth reform," according to the Commission.