Karamba Diaby is Germany's first African-born MP. Now he's fighting to get re-elected. Despite threats and racist insults, he's determined not to give up. DW's Daniel Pelz reports from Diaby's hometown of Halle. 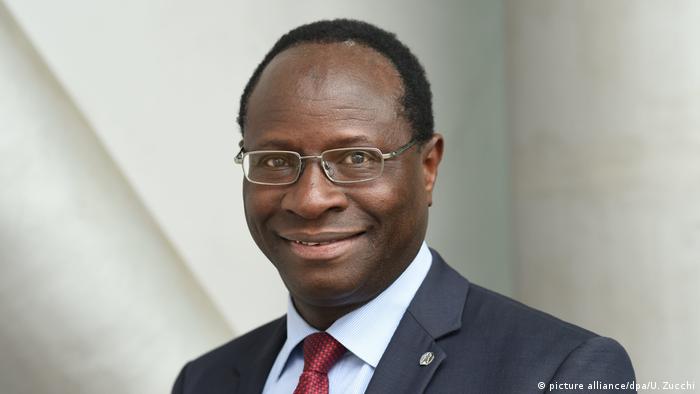 For Karamba Diaby, this could be the perfect day for last-minute campaigning: The autumn sun is shining brightly down on his hometown of Halle, the sky is blue and scores of potential voters are strolling through the city center. Fifty-five-year-old Diaby, a member of Parliament for the Social Democratic Party (SPD) since 2013, is participating in an open-air debate with members of a youth initiative.

But a man in a worn-out green sports suit, his filthy white hair almost hanging down to his shoulders, isn't interested in campaign messages.

"The political parties only start doing something when an election is coming up," he snaps angrily at Diaby. Then he starts to ramble against Chancellor Angela Merkel's chief of staff, who told citizens in an interview that they should rather abstain from voting than support the anti-immigrant AfD party. The noise of a tram drowns out many of his words. The man charges that the other parties are not doing anything to help Germany's people. 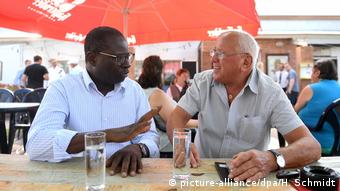 Diaby discussing politics with a pensioner at a past event

"People don't even go to vote anymore. Do you ever wonder why?" he fumes.

Fiery exchanges are nothing new for many candidates participating in this year's polls. Since the government decided to open up the borders to some 890,000 refugees two years ago, the atmosphere in some areas has heated up. Right-wing protesters have even tried to disrupt some of Chancellor Merkel's campaign rallies. Germany's Federal Criminal Police Office has recorded some 2250 criminal acts related to the election campaign - mostly damage to property and insults.

"Every citizen can always come to me," Diaby tells the man in a stern voice, while looking straight into his eyes. He says that every citizen is welcome to visit his constituency office or participate in the public debates that he holds regularly. But the old man clearly isn't impressed. He continues to complain to the people next to him, before disappearing into the crowd. 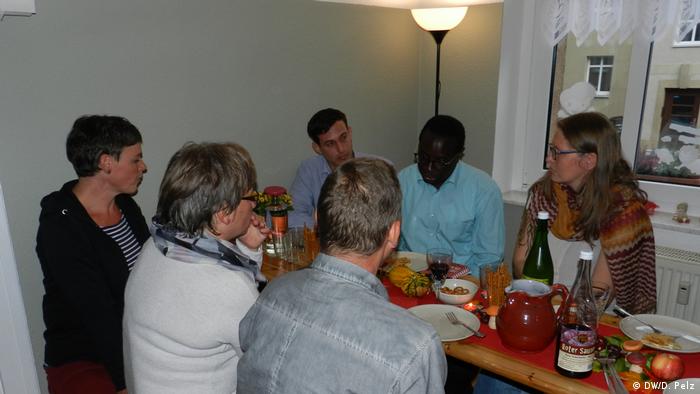 During the campaign, Diaby regularly visits people at their homes to discuss politics

The tense exchange is one of the more harmless encounters Diaby, Germany's first black African-born MP, has been confronted with. For the last several months, he has been the subject of a racist online campaign.

"The tone has gotten a lot rougher," he tells DW after sitting down for a late lunch in a restaurant. "Many discussions on social media aren't conducted in a fair manner. There are attempts to intimidate and silence elected representatives and other members of the public."

Diaby has been the target of an extensive hate campaign by right-wing groups on social media platforms such as Facebook.

Last month, the far-right NPD party posted a photo of one of his campaign posters on its Facebook page. "That's what the SPD calls 'representatives of the German people'," the party wrote above the image. Commentators on the page called him "a black monkey" and used the N-word.

But Diaby decided to fight back. Struggling against the odds is something of a key theme in his life. Diaby, who was born in Senegal and lost his parents at an early age, came to Germany in 1985 on a scholarship to study chemistry. He learned German, made the eastern city of Halle his home after marrying a fellow German student, and worked hard to find a job after finishing his studies. 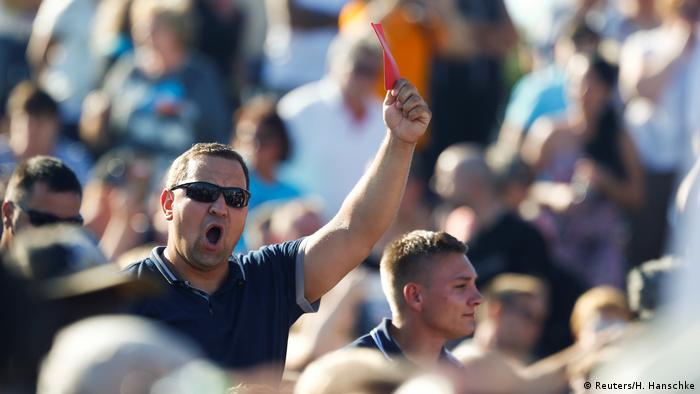 So when he started receiving NPD hate messages, he also tackled the challenge head-on.

"To all racists: I am not your negro," he wrote on his Facebook page, and filed criminal charges against the far-right party.

Threats and intimidation against him and his party are not confined to the online world. Right-wing protesters tried to shout down a campaign rally he held together with Germany's foreign minister, Sigmar Gabriel, earlier this month. Videos on YouTube show a group of people shouting "Traitors, traitors!" and waving posters denouncing Diaby's SPD party.

"We have to resist such tendencies," he tells DW. "This country is too beautiful and too important to leave it to those that want to divide our society."

That looks like a tall order in the city of Halle. The right-wing AfD gained 24 percent of the vote in state elections last year. Campaign posters of the anti-immigrant party hang on many lampposts on the city's streets.

But Diaby says that racism and derogatory attacks are only one part of the story.

"There's a small group of people who aren't ready for dialogue and who don't want to make any suggestions about how we could improve our society. And then there's a big mass of people that are open-minded, democratic and show solidarity. They are the majority. That gives me courage."

Diaby, who earned his Ph.D. with a study about pollution levels in Halle's gardens, and has never left the city longer than four weeks in a row, has become a sort of local celebrity. He can't walk on Halle's cobble-stoned streets for long without a greeting flying his way.

"Is that Dr. Karamba?" a 17-year-old student of the local polytechnic asks his friend as they ride by on their bicycles. He stops to shake the MP's hand. "That's the SPD man," says a woman in her 70s to a friend as they walk past.

"He is honest, open-minded and a great politician - but unfortunately he belongs to the wrong party," says Ronald Müller, a strongly built resident in his 50s, after meeting Diaby on the street.

"It's outrageous what the right-wing groups are doing to him. But I think he's handling it very well."