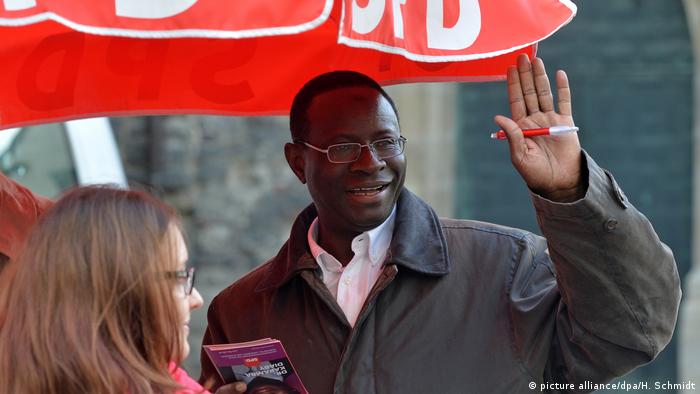 Karamba Diaby, German MP for the eastern city of Halle, has filed criminal charges against people who made racist comments on a Facebook post by the far-right National Democratic Party (NPD) on Monday.

Hundreds of people have commented on the NPD post, which has not been taken down, that read, "German representative of the people, according to the SPD," next to a picture of one of Diaby's campaign posters.

Taking a slogan used by German communists after World War I, the NPD post added: "Who betrayed us? The Social Democrats." Many Facebook users posted racist slurs underneath the post and questioned Diaby's right to represent German people. Many others showed their support for the MP, who has represented the SPD since the last national election in 2013.

'I AM NOT YOUR NEGRO'

Diaby responded with his own post on Monday afternoon, telling "all racists: I am NOT your NEGRO," referring to the title of Raoul Peck's recent documentary on US author James Baldwin.

"'A black monkey,' 'traitor' and the 'N-word' are just some of the insults currently on the NPD's Facebook page under the post of my election campaign picture," Diaby wrote. "Neither the skin color nor the origin decide who is a Bundestag member, but the citizens of this country, who with an overwhelming majority are for an open society in solidarity. I won't allow myself to be intimidated and I won't give up working for the solidarity of our society."

Attorney Peter Richter, the NPD's chief official for legal matters, pointed out that the NPD had not broken any laws. While the party's original Facebook post "may not please certain people," "it is not legally objectionable," he told DW by email. "Any prosecutable comments are immediately deleted by the NPD," he added.

In a subsequent post published on Tuesday, Diaby said he was "overwhelmed" by the response and the pledges of support, and said the fact that the comments had been deleted by the NPD did not change his determination to press charges. 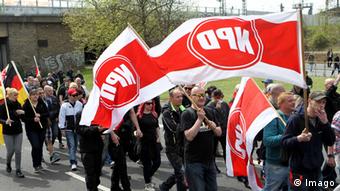 The NPD has slid into political irrelevance in recent years

"I get the impression that with these racist comments people are trying to intimidate democratic people, and silence them," he told DW. "It's important to me because we can't just allow it to slide - we have to take it seriously and stand up to it. I wanted to make clear that people who believe in democracy in this country will open their mouths."

"Of course freedom of speech is very important in our society, but the dignity of human beings is inviolable - that's also written in our constitution - both things need to be unified," he said.

Diaby said he has often fielded racist comments on his social media presences during his tenure as MP, but that it had become worse in recent years - particularly as, he said, many people don't bother to hide their identities anymore. "That's the new thing about it," he said. "People have started to see the internet as a lawless space. And that's exactly why we have to do something against it."

Born in Senegal in 1961, the orphaned Diaby won a stipend to study in East Germany in 1985, where he studied chemistry and received a PhD in geo-ecology in Halle-Wittenberg. He was an SPD councilor in Halle from 2009 to 2015, and was elected to the Bundestag in 2013, where he is deputy leader of the committee for human rights and humanitarian help.

Germany's parliament has changed the constitution so that extremist parties can no longer claim government funds. Critics call that undemocratic, but lawmakers say Germany's political system is entitled to defend itself. (23.06.2017)