Amid tensions surrounding the British destroyer off the annexed Crimean Peninsula, the Ukraine and the US have launched Black Sea drills with dozens of warships. How will Moscow react to the largest maneuvers in decades? 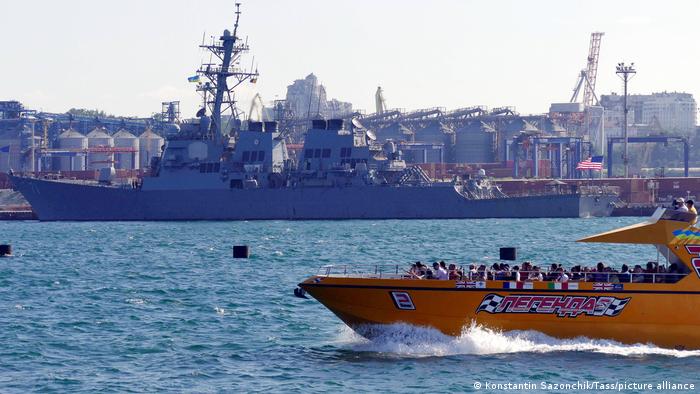 A military incident off the coast of the Crimean Peninsula caused quite a stir last week. The British warship HMS Defender was en route from the Ukrainian Black Sea port of Odessa to Georgia when it encountered Russian forces, who issued warning shots.

The incident sparked tensions between Moscow and London and came just days ahead of multinational naval maneuvers led by Ukraine and the United States in the Black Sea, known as Sea Breeze.

A total of 32 ships, 40 aircraft and helicopters and 5,000 soldiers from 24 countries are taking part in the exercises, which last through July 10. Participating countries include the US, the United Kingdom, France, Turkey, Israel, Morocco, Japan, South Korea and Australia. Germany, which has been involved in the past, is not taking part this year. It's the largest maneuvers in decades, after last year's drills were shortened due to the pandemic.

Various exercises are planned at sea, on land and in the air with the goal of bringing Ukraine up to NATO standards. Officials also want to achieve better multinational cooperation in regional "peacekeeping," according to spokesperson for Ukraine's Defense Ministry.

On closer inspection, the forces involved in the drills are anything but massive. A majority of the ships, 24 of them, are Ukrainian and only a couple of them are warships. And only a few Western NATO warships will be involved in the exercises, like the US destroyer Ross which is armed with Tomahawk cruise missiles.

What is Sea Breeze?

Sea Breeze is Ukraine's oldest, largest and best-known multinational military exercise since it gained independence from the Soviet Union some 30 years ago.

The exercises on the northwestern Black Sea coast are an annual event led by Ukraine and the US and is based upon a 1993 memorandum on military cooperation between the two countries. The first maneuver in the Black Sea took place in 1997. Two years prior, Russia and Ukraine settled their long-standing dispute over the division of the Black Sea fleet.

The drills are financed by the US, with Ukraine providing the training grounds in the Odessa, Mykolayiv and Kherson regions. Most of the countries taking part in the drills are NATO countries, along with Ukraine's Black Sea neighbors. Russia took part in Sea Breeze only once, back in 1998. 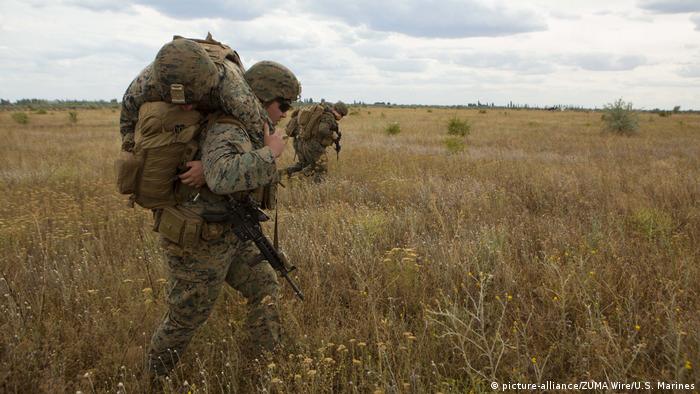 The maneuvers involve exercises on land, at sea and in the air

Sea Breeze has had special meaning for Ukraine ever since Russia's 2014 annexation of Crimea, which resulted in the Ukrainian Navy losing a base and several ships. The Russian Black Sea fleet was clearly a cut above the Ukrainian Navy prior to annexation, and it has extended its superiority ever since by introducing additional warships, some even equipped with Kalibr cruise missiles.

Odessa has since become Ukraine's main navy base and is often used by ships belonging to NATO. Because of the unequal balance of power with Russia, Sea Breeze is seen as a way of showing international solidarity with Ukraine.

Russia is keeping a close eye on the Black Sea maneuvers. In April, the country's Black Sea fleet conducted an unusually large exercise in Crimea involving 10,000 troops and 40 warships. Ships from other Russian areas were also deployed. In addition, Russia has since declared parts of the Black Sea coast off Crimea off-limits to foreign vessels until late October.

According to a spokesperson with the Russian Defense Ministry, Moscow will monitor the Ukrainian-American exercises very closely and respond if necessary.

Russian launches to ISS from United States on SpaceX flight 05.10.2022

The flight marks the first time a Russian cosmonaut has launched to space from the United States in two decades. NASA and Russia's Roscosmos have continued cooperation despite tensions over Ukraine.