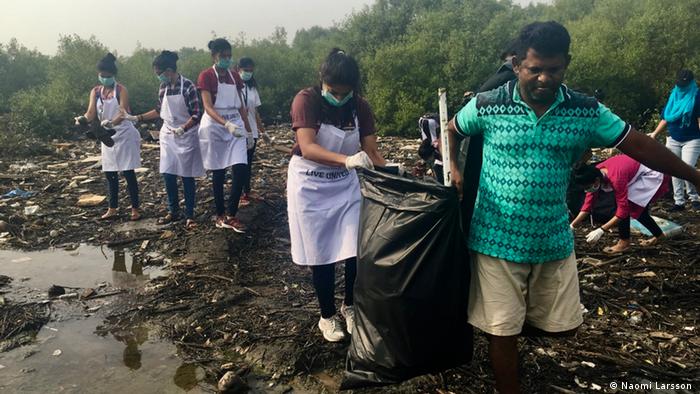 Crows pick at debris washed up on a shore in Mumbai. It's a humid day, and through thick smog, the outlines of gray buildings are just about visible on the other side of the inlet.

In this part of Mumbai's mangrove forest, the land is barren, dotted with pools of dirty water and plastic waste.

"There's so much dirtiness," says 19-year-old college student Kajal Jadhab, as she looks around at the trash.

Scenes like this are common along Mumbai's shoreline. They were once covered in mangroves — coastal trees that act as vital flood defenses and carbon storage systems — but the forests have severely degraded, destroyed by encroaching housing developments and waste.

Mumbai, India's second city, has lost around 40 percent of its mangrove forest cover in recent decades. Desolate areas like this are left behind, snapshots of the country's troubled relationship with the environment. Waste can clog the roots of the mangrove trees, killing them and the habitat they provide for wildlife

But there are signs of change. Jadhab, armed with a trash bag and gloves, is a volunteer with Mission Mangroves, a project run by NGO United Way Mumbai.

Each month, volunteers in groups of around 20 take part in cleanup drives across Mumbai's wetlands, and about twice a week Mission Mangroves runs planting sessions to restore these forests. They plan to replant 100,000 mangrove trees, and in just over a year they've planted 55,000.

"The mission is to green 20 acres of wetland by planting mangroves, and to educate thousands of Mumbai people about the importance of mangroves," says Ajay Govale, United Way Mumbai's director of community impact.

The air is stuffy under the mid-morning sun but the student volunteers, who are mostly in their late teens, get straight to work. They fill tens of trash bags with all kinds of waste — syringes, backpacks, shoes, even a motorcycle helmet.

It's Jadhab's first time volunteering here. "I want to understand how I can help myself and other people to clean the sea. Not many people are aware of the issue, so we have to understand that, and how much the mangroves help us."

"We don't want pollution in our city and in India, and doing little bits like this helps," says another student and first-timer, Shweta Waghe.

Discarded plastic bags, wrappers and bottles are a common sight on the beaches and streets of Mumbai. In fact, India is among the worst countries for mismanaging plastic waste. Much of this waste ends up in the wetlands, polluting, clogging and choking the roots of the mangrove trees surrounding the island city.

"The biggest threats [to mangroves] are developments and disposal of waste. A lot of this waste you see is not going to decompose for hundreds of years, and some of it will never decompose," says Govale. 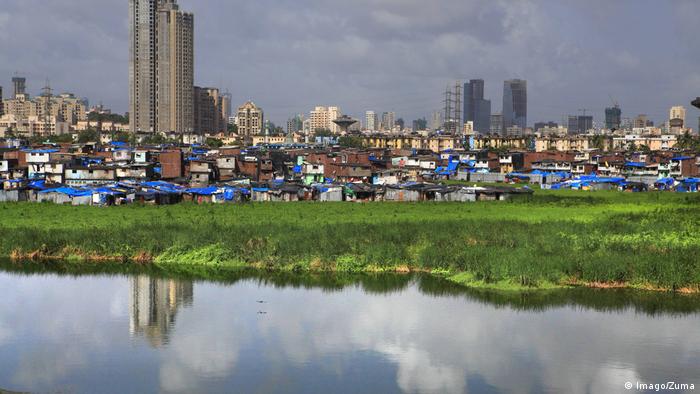 Land is at a premium in growing Mumbai, and developments can spring up on important marshland and mangrove forest

It's a similar picture across the world. Between 30 to 50 percent of all global mangrove forest cover has been lost in the last half-century to agriculture, aquaculture, infrastructure development and waste, with knock-on effects for humans.

"Mangroves are the understated habitat heroes of the coast," says Jock Mackenzie, director of the MangroveWatch research group. "Mangroves provide multiple ecosystem services that support, protect and enhance the economies and livelihoods of coastal communities."

Mumbai is one of the worst cities in the world for air pollution — ranking 71st most polluted out of more than 3,000 cities with available air quality data — and is desperately lacking green space, like mangrove forests, to filter pollutants from the air. Mangroves can absorb up to four times more carbon than other tropical forests.

The loss of mangrove forests also means the loss of food, shelter and breeding grounds for an array of wildlife, from different crab species to cockles and prawns, which in turn affects local fishing communities reliant on the marine animals for food and livelihoods. 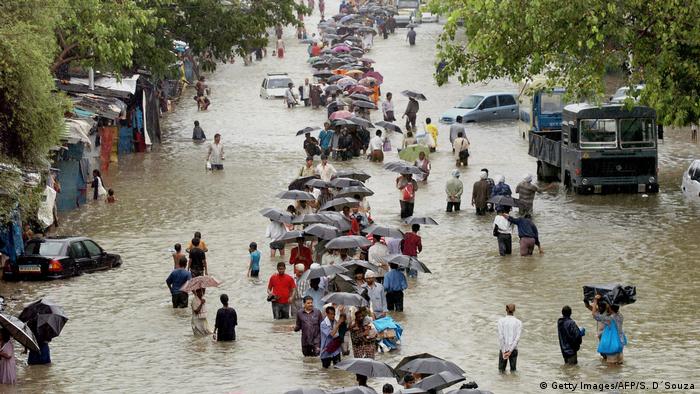 In 2005, Mumbai residents felt the full force of floodwaters after losing much of their vital mangrove flood defense system

Their disappearance as a natural bulwark against flooding and erosion also leaves coastal communities like Mumbai more vulnerable, as climate change causes sea levels to rise and extreme weather.

The consequences of the city losing almost 40 square kilometers of mangroves in the 1990s first became clear after disastrous floods in 2005 killed more than 1,000 people.

"This is what opened all our eyes after the floods of 2005. Mangroves were often considered to be wild bushes, no value to the environment, and with the floods hitting us we realized this is supposed to be a belt that protects the island city and maintains the balance between the land and the sea," says Govale.

After the flooding, Mumbai did take action to protect the forest. The local government formed a forest department "mangrove cell," in charge of patrolling the land and deterring people from dumping waste in the wetlands. The remaining mangrove forests are now also protected from encroaching housing developments, an ongoing threat in the rapidly growing and densely populated city.

The presence of rangers has made a difference in stopping illegal construction and the dumping of waste, according to Govale. Last month, rangers caught a construction worker dumping 10 tons of debris — a crime now punishable by a large fine or even imprisonment. 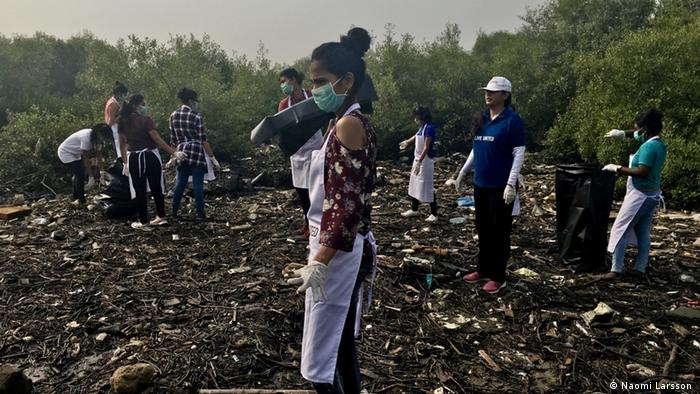 Still, despite the patrols and threat of fines, trash still finds its way to the beach. That's something Mission Mangroves hopes to tackle with its cleanups, by helping people realize that pollution and litter in the city impacts the health of the forests.

"A lot of waste will come back to the shore," says Govale "We know it's not a lasting impact, but the lasting impact is what they, the volunteers, are going to carry."

Volunteer Asmita Mestra has been left with a sense of urgency. The 19-year-old believes younger generations will be the ones to face the full environmental impacts of mangrove loss in years to come.

"Young people are going to be most affected from this pollution, and the loss of the mangroves, so we need to take action," says Mestra. "This is our nature; this is protecting us so we should also protect it."

The Dutch are attempting to "climate-proof" their port city of Rotterdam by changing its relationship with water. Other delta cities around the world will also need to innovate if they are to survive sea level rise. (09.05.2017)

Forests, particularly tropical ones, are fundamental to the fight against climate change. They produce oxygen, store carbon and are home to millions of people and animals. Yet they are disappearing at an alarming rate. (01.08.2018)

Mumbai moves to protect its flamingos

Mumbai isn't just home to skyscrapers and slums - thanks to its mangrove forests, it also attracts flamingos and rare bird species. But this biodiversity is under threat from pollution and illegal slum encroachments. (31.05.2016)

Kids save the mangroves in Panama